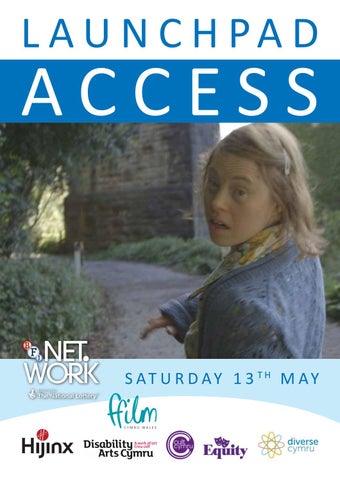 10:15 Case Study: My Feral Heart with the filmâ&#x20AC;&#x2122;s director Jane Gull. A look at the making of micro-budget British indie following a man with Down Syndrome (Steven Brandon) forced to move into an institution despite a capacity for independent living. Hijinx filmmaker cohort are also invited to share some of their learning from the recent training programme working with actors from Hijinx Academy. 11:15

Director Ted Evans (Defeye) & producer Alex Usborne (104 Films discuss their upcoming i-features thriller Retreat, the first British feature film to be shot entirely in British Sign Language. Joined by actor Ben Owen Jones on working in the industry from a performerâ&#x20AC;&#x2122;s point of view and how filmmakers can help make the industry more accessible and inclusive.

Workshops (approx. 45 mins each with break in between)

Session A: Filmmaker Caglar Kimyoncu on devising scripts from improvisation working with disabled and non-disabled performers Session B: Diverse Cymru offer a practical session on ways to eliminate obstacles â&#x20AC;&#x201C; both perceived and actual - and enable the industry to be more inclusive for disabled filmmakers, cast and crew Session C: Creating Accessible Films Without Money or Time Filmmaker Sandra Alland will guide you through low- and no-budget filmmaking ideas. Screening a few of her short documentaries and poetry-films as examples, Sandra will highlight tips for: budgeting time and money (or lack of it); coming up with a concept or storyboard; organising co-conspirators; hiring disabled and D/ deaf people for your cast and crew; and creating captions and audio description. With practical advice and creative prompts from Sandra, the group will imagine ways to carve exciting films out of (almost) thin air. 17:00

GUEST SPEAKERS JULIE MCNAMARA Julie McNamara is Artistic Director of Vital Xposure,one of UK’s leading disability led touring theatre companies within Arts Council England’s national portfolio. As both an artist and activist, she is a leading voice within Disability Arts on international stages. Her work is driven by social justice with a life long preoccupation with excluded voices on the political periphery. Her particular interests are in discourses and representations of madness on stage and screen. She was co-founder of London Disability Film Festivals with Caglar Kimyoncu from 1998 to 2006 and an international consultant in Disabilty on film. She is also an award winning playwright (Unlimited Award 2014, Southbank Show Award 2010, ITV / DaDa Writers 2009, Peabody Award for documentary 2000). She has a substantial theatre production history both in the UK and on international stages (Adelaide, S Australia; Alberta, Canada; New York, USA; Auckland and Wellington New Zealand and N Ireland) She has a substantial record of international mentorships from UK, Ireland, Canada to South Australia. Recent practice-based projects include The Butch Monolgues by Laura Bridgeman and diRTy by Joey Hateley with Trans Action Theatre. SANDRA ALLAND Sandra Alland is a writer, filmmaker, interdisciplinary artist and curator. Her films have screened widely in the UK, and at international festivals in Malmo, Berlin, Seattle and Los Angeles. Sandra has published three books of poetry, and is co-editor (with Khairani Barokka and Daniel Sluman) of the anthology, Stairs and Whispers: D/deaf and Disabled Poets Write Back (Nine Arches Press, 2017). As an extension of the book, Sandra co-created three new film-poems (with Ania Urbanowska), two of which feature British Sign Language. She also recently co-created five short documentaries and a curated film playlist as part of Disability Arts Online’s Viewfinder, in collaboration with Lisa Mattocks

and SICK! Festival. Sandra has a story about the 1920 National League of the Blind March on London forthcoming in Protest! (Comma Press, 2017), and curates Scotland’s intersectional trans and queer arts project, Cachín Cachán Cachunga! www.blissfultimes.ca TED EVANS Ted Evans is one the leading deaf filmmakers in the UK. In 2011 his short film The End won seven international film festival awards and continues to be screened all over the world. His short film of Retreat also won six international awards. Ted directed and co-wrote two films for the Paralympic Opening Ceremony. He runs a small production company, Defeye Films, making corporate films for a wide range of clients. In addition, Ted has a drama series in development and a short TV drama going into production towards the end of the 2017 and Retreat the feature film is going into production in 2018 having successfully won funding through the iFeatures low budget feature film scheme. JANE GULL Jane Gull is an award-winning director from Southend-OnSea. Her debut feature film My Feral Heart is currently the UK’s most successful cinema-on-demand film of all time. In 2016, she made the BIFA long-list for debut director and won best director at the Lift-Off Awards. Her short film Sunny Boy has screened at over sixty International festivals and was broadcast on Ch4 and ARTE TV. In 2012 she was selected for the Berlinale Talent Campus and Think-ShootDistribute at the 56th BFI International Film Festival. Jane is attached to direct the feature film Lost Seoul, set in South Korea/US.

BEN OWEN JONES Ben’s first television appearance was as a child when he appeared in the BBC children’s programme Grange Hill. In 1995, he had an accident which resulted in a spinal injury, leaving him paraplegic, and since then he uses a wheelchair for mobility. Following rehabilitation he studied interactive art at undergraduate level and went on to take an M.A. in multimedia. His work was shown at an art festival in Germany. In 2005, he applied for and was selected to take part in the Talent Fund for Disabled Actors – a bursary scheme organised by the BBC, Channel 4 and the Actors Centre. The scheme was designed to increase the pool of disabled acting talent available to TV casting directors and provided BBC masterclasses delivered by leading TV directors, and Actors Centre training. Following this he was cast in the BBC drama, New Street Law where he played Chris Quick; a semi-regular character who was also paraplegic. Since then he has gone on to appear in several TV dramas. In 2012 he played the part of a wounded soldier in the dramatisation of the story of Dr. Ludwig Guttmann written by Lucy Gannon. Ben has worked with the award winning Taking Flight theatre company, touring Shakespeare productions around Wales and is currently appearing in Channel 4’s Chewing Gum, written by Michaela Coel, Born to Kill and the BBC daytime continuing drama Doctors. caglar k imyoncu I am a digital and video artist as well as curator and arts consultant. My practice includes collaborating with and mentoring artists in a variety of media, and curating digital arts. Research, collaboration and improvisation form the core of my practice, with the aim of being able to understand a subject matter within its context and creating an artistic response without losing authenticity.

Informed by personal experience, I have long been interested in interpretations of ‘different’ and ‘conflict’ and I continue to explore these through my art. My creative process is guided by a concern with the pressure to conform to ‘norms’, which continue to prevail even in apparently liberal and tolerant societies. ALEX USBORNE Alex Usborne is an experienced Film & TV Producer who has carved out a reputation for producing distinctive, original and successful films which have found audiences across the world. He has produced 12 feature films, winning over 20 international awards including The Acid House, Sex & Drugs & Rock & Roll, I Am Breathing Special People & Notes on Blindness. He has made Prix Italia, RTS & EMMY winning and BAFTA nominated TV drama and has made 8 documentary films from his home town of Sheffield including the award winning films about boxers Johnny Fantastic & Brendans Boys and the acclaimed and multi award winning Tales from a Hard City. For the last 12 years he has run 104 Films – the world leaders in disability cinema with the aim of making a “tectonic difference in the representation of disabled film talent in the UK film industry and enabling the voice of disabled film talent in the cinema mainstream.”

CHAPTER ARTS CENTRE, CARDIFF F R I D AY 1 2 TH M AY 18:00 UK / 2016 / 83 mins / 12a Dir: Jane Gull With: Steven Brandon, Will Rastall, Pixie le Knot A sudden bereavement throws Luke, a fiercely independent young man with Down’s syndrome, into a daunting new environment where he finds unexpected support from his feisty carer. A character study about the universal themes of grief and friendship, with an evocative score. “A terrific central performance from Steven Brandon, a young man with Down’s syndrome, is the driving force of this heartfelt British independent picture.” The Observer