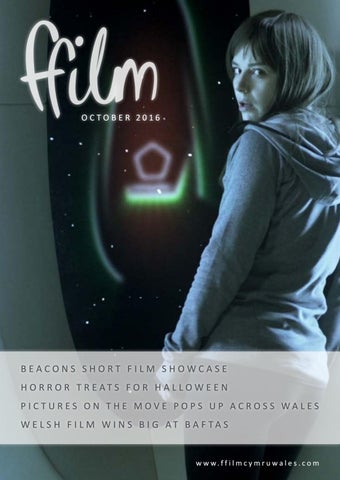 WELSH HORROR FOR HALLOWEEN As Halloween creeps up on us again, we take a look at what terrifying treats await from Ffilm Cymru Wales. A Dark Song This Irish-Welsh occult horror is the debut feature from writer-director Liam Gavin. Sophia employs a damaged occultist, Michael Cassus, to carry out a gruelling ritual in order to speak to her murdered child. But when Sophia’s real intentions are revealed, the two must face being terrorised by hell itself. Starring Catherine Walker and Steve Oram (Sightseers, Aaaaaah!), A Dark Song has been earning critical acclaim from film festivals across the world, including Fantastic Fest in Texas, and has been selected for the BFI London Film Festival this month.

Abertoir A Dark Song’s first screening in Wales will be at Abertoir’s annual Halloween takeover of Cardiff’s Chapter Arts Centre on 30th October. Festival Director Nia Edwards-Behi says “We’re particularly excited that this year’s Abertoir: Cardiff line-up includes two films that will feature at our main event too: A Dark Song and The Love Witch. The Love Witch is one of this year’s most intriguing and artistically-accomplished genre films, while A Dark Song is a really striking and intense feature debut. We’re particularly pleased to be able to showcase a film backed by Ffilm Cymru Wales, who also back our festival, and we hope this really successful WelshIrish collaboration continues on other projects! “We’re very happy to be asked once again to collaborate with Chapter on their Halloween line-up! We’re able to indulge in a favourite on the big screen with Carrie, and indulge in some true entertainment with the ever-hilarious Nicko and Joe, who’ll be tearing apart The Howling II. “We’ve got a lot more planned for the main festival in November, including welcoming Fabio Frizzi and cult icon Lynn Lowry as special guests, and our celebration of all things 42nd Street sleaze, alongside our usual roster of brand new and up-and-coming horror films.” Tickets for Abertoir’s Halloween event in Cardiff are available from the Chapter Arts Centre box office, and the Abertoir International Horror Festival will take place at Aberystwyth Arts Centre this November. Find out more at www.abertoir.co.uk Left: Nia Edwards-Behi. Photo: Matt Hardwick

D o n ’ t K n o ck T wice To save her estranged daughter, a guilt-ridden mother must uncover the terrifying truth behind the urban legend of a vengeful, demonic witch. This supernatural horror from the makers of cult sci-fi hit The Machine stars Lucy Boynton and Battlestar Galactica’s Katee Sackhoff, and premiered last week at Raindance Film Festival. Written by Mark Huckerby & Nick Ostler, directed by Caradog James and produced by Red and Black Films’ John Giwa-Amu, Don’t Knock Twice was the first Welsh project to benefit from Welsh Government and Pinewood Pictures’ Media Investment Fund, and is due for release in early 2017.

T he C hamber Tense underwater thriller The Chamber stars Swedish actor Johannes Bah Kuhnke, in his first film role since the critically acclaimed Force Majeure propelled him to international recognition. A special ops unit commandeer a commercial research vessel and its submersible off the coast of North Korea to locate a mysterious item at the bottom of the Yellow Sea. When an explosion causes the sub to overturn and take on water the crew begins to understand that not all of them will escape and a fight for survival ensues. The Chamber also stars Charlotte Salt (The Musketeers), James McArdle (Star Wars: The Force Awakens), and Elliot Levey (Spooks: The Greater Good), and features the debut original film score by James Dean Bradfield of the Manic Street Preachers. Having premiered at this year’s FrightFest, the film will be released in early 2017 through Studiocanal.

The Lighthouse and T he L ibrary How about a Welsh double bill for Halloween? FfCWsupported thrillers The Lighthouse and The Library Suicides are both released on DVD and VOD on 31st October through Soda Pictures. Chris Crow’s historical chiller The Lighthouse is based on the macabre true story of The Smalls Island Lighthouse tragedy, and stars Michael Jibson (Saints & Strangers, Les Misérables, The Riot Club) and Mark Lewis Jones (Game Of Thrones, Master And Commander, Child 44). The Library Suicides (Y Llyfrgell), the debut feature from award-winning director Euros Lyn, and based on Fflur Dafydd’s bestselling novel Y Llyfrgell, is an offbeat Welshlanguage thriller set in the National Library of Wales that explores the secrets and lies at the heart of storytelling, and asks who has the right to tell the story. The Library Suicides stars Catrin Stewart (Doctor Who, Stella), who won the Best Performance in a British Feature Film award following the film’s premiere at Edinburgh Film Festival.

Short films from BFI NET.WORK Wales’ Beacons scheme will be showcased at this year’s Aesthetica Short Film Fetsival. The six shorts from emerging Welsh talent will be screened at a special showcase on Friday 4th November at the festival in York. Following the screenings, you can find out what funding and support is available from Ffilm Cymru Wales and the BFI NET.WORK, and hear the filmmakers discuss their work, from the initial thematic ideas, to the overall production. The BAFTA Qualifying Aesthetica Short Film Festival (ASFF) is an international film festival, which takes place annually in York at the beginning of November. The festival is a celebration of independent short film from around the world, and an outlet for supporting and championing filmmaking. Each year, ASFF attracts thousands of entries. One of the UK’s most exciting site-specific events, ASFF showcases over 300 international films from emerging and established filmmakers in various venues across the city of York. The programme also includes industry masterclasses, networking sessions and panel discussions. Panic

BRINGING THE CINEMA TO YOU WITH PICTURES ON THE MOVE From special sunset screenings in castles to community regeneration schemes, Ffilm Cymru Wales’ pop-up cinema provides exciting new ways to watch films. Our kit provides you with everything you need to host your own pop-up cinema, and can be used in a variety of indoor and outdoor locations. Ffilm Cymru Wales has worked with a number of partners, including Cadw, BAFTA Cymru, and the Charter Housing Association, to deliver pop-up cinema screenings and filmmaking workshops at extraordinary locations across Wales.

CHARTER HOUSING We’re currently working with the Charter Housing Association to offer free family film screenings at local community venues for residents of the South Wales valleys. Charter Housing Association’s Digital Communities Officer Steve Dennis explains: “We sat down with Ffilm Cymru Wales, and explained that we wanted something creative and innovative to do with the community. We got the project going very quickly, with a lot of enthusiasm from the community. “It’s been great. At the last showing of The Jungle Book, we had a mum, who hadn’t been out in over twelve months. She had her two young boys with her, and she was shaking, nervous. But she said that it had been a great evening, a great free evening, for her and the boys. So that made it a special moment, really.”

The Cirque du Cinema tent at Swansea’s Kaya World Music and Arts Festival gave young people the opportunity to make their own animated films, as well as watch some of the year’s biggest films for free.

Filmmakers Magda Osinka and Sarah Cox also workshopped their upcoming animation Jasia with young people at the festival. The stop-motion and CG animated feature film is inspired by the true events that happened to the director’s grandmother during the Second World War in Poland, and is currently in development with Ffilm Cymru Wales.

Ffilm Cymru Wales partnered with BAFTA Cymru, Film Hub Wales, Into Film and more to showcase the best in Welshlanguage film at the Eisteddfod’s first ever pop-up cinema.

To celebrate our 10th anniversary this year, the BFI Player is offering a selection of Welsh films.