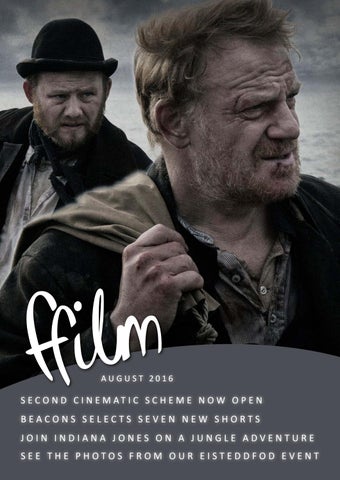 TA L E N T S C H E M E R E T U R N S A F T E R C I N E M AT I C S U C C E S S The rising talent scheme that launched the feature film directorial debuts of Craig Roberts and Euros Lyn is to return for a second round. Ffilm Cymru Wales will work again with co-founders BFI and S4C, with additional support from Fields Park Entertainment and Warner Music Supervision. Cinematic produces three films from Welsh directors showcasing creative appeal, commercial potential and market focus. The scheme supports emerging filmmakers with bold and unique voices through intensive training, development and funding. The first round of the scheme helped to launch Submarine star Craig Robert’s directing career with Just Jim, a dark comedy drama starring Emile Hirsch that premiered at SXSW in 2015. He is now in development on his second feature as writer-director of In My Oils, which is produced by Pip Broughton and Adrian Bate of Vox Pictures and cofunded by Ffilm Cymru Wales and the BFI. Meanwhile, the second film from Cinematic, Chris Crow’s historical chiller The Lighthouse is currently on release through Soda Pictures.

Known for his work on television hits Broadchurch, Happy Valley and Marvel’s Daredevil, director Euros Lyn made his feature film debut with the Cinematic-supported Y Llyfrgell / The Library Suicides. Adapted from Fflur Dafydd’s novel, this Welsh-language thriller sees twin daughters set a deadly trap for their mother’s murderer in the National Library of Wales. The film premiered at Edinburgh International Film Festival earlier this year, and earned its lead Catrin Stewart (Doctor Who) the award for Best Performance in a British Feature Film for her dual portrayal of both Ana and Nan. Y Llyfrgell / The Library Suicides will be released in select UK cinemas on 5th August through Soda Pictures. Following the theatrical release, production partners S4C will broadcast the film next year. The next round of Cinematic is open now, with an application deadline of 30th September. The scheme will support the development of 10 projects and their teams, as well as committing funding to the production and market preparation of three of the films. More details can be found at www.cinematicwales.com and for updates, you can follow @CinematicWales on Twitter.

BEACONS SHORTS HIGHLIGHT WELSH FILM FLAIR Seven new shorts from diverse emerging Welsh filmmakers have been selected to go into production through Ffilm Cymru Wales and BFI NET.WORK’s Beacons scheme. From an historical Welsh-language thriller to apocalyptic animation, this fresh crop of short films displays a broad range of bold voices and burgeoning talent. With sponsorship from Western Edge Pictures, part of the Wales based finance company Gennaker Group, the successful shorts will start production in the autumn. Congratulating the successful filmmakers, BFI NET. WORK Wales Manager Tracy Spottiswoode commented “Beacons shines a light on emerging talent from Wales, offering Welsh filmmakers an opportunity to showcase their cinematic flair. Once again, we had an overwhelming response with so many high quality applications making it exceptionally difficult for the panel to choose the final seven projects. It’s great to see a majority of women directors and filmmakers from diverse backgrounds following on from our recent Launchpad initiatives to support equality of opportunity and improved inclusivity of the sector.”

Last year’s Beacons’ films attracted Michael Sheen to join Carl Rock’s ‘Welsh Gremlins’ adventure The Truthful Phone (pictured, below), while Catherine Linstrum gained production funding for her feature debut Resolute after shooting her Beacons short Things That Fall from the Sky (pictured, right). It’s clear that the Beacons scheme can make a real difference. Gennaker Group CEO Vaughan Sivell said, “The Beacons shorts scheme is an exciting chance to work with filmmakers from all backgrounds and disciplines. We are immensely proud of our roots in Wales and hope we can help encourage the global reach of the talent involved.” The selected films are:

A mbition Writer: Matt Redd Director: Ryan Hooper A black comedy about Brendan, a toll booth operator in the middle of nowhere with a disdain for conversation, a mild lactose intolerance and an interest in the genre of the academic novel. Why do all his customers keep trying to change him?

B eddgelert Writer-director: Medeni Griffiths Producer: Julie Gardner, Bad Wolf Productions Based on the Welsh legend, Beddgelert tells the story of Llewelyn, a prince grieving for his dead wife. He seeks solitude in a remote hunting lodge, taking with him his newborn son and his most trusted hound, Gelert. But despite Gelert’s companionship, Llewelyn is blinded by grief, and he fails to see the new danger that threatens his family. This exciting filmmaker team will work with a specialist in 12th century Welsh language to achieve complete authenticity in the period dialogue.

Writer-Director: Guymon Cheung As a boy in an isolated farmhouse tries to survive his crazed father, he yearns for the return of his mother to protect him - but instead slowly discovers his fatherâ&#x20AC;&#x2122;s grim past. Welsh filmmaker Guymon Cheung studied at the New York Film Academy before building a career in music videos and commercials.

Writer-Director-Animator: Shwan Nosratpour In this delightful stop-motion comedy of megalithic proportions, travel through the mysterious mists of time and join three wise old druids on a quest to restore the balance of their world after an inexplicable catastrophe. Sunspots is the debut animated film by Shwan Nosratpour, in which he brings his charming handmade models to life.

Writer-Director: Lesley Manning Producer: Myf Hopkins An anonymous man in a mac is walking through rush hour of a city. Unbeknownst to anyone he is wearing a suicide vest. While determinedly walking through the crowds, he is disturbed by unexpected glimpses of humanity. Away from the crowd he breaks down. Can he complete his mission? Lesley Manning has extensive experience in directing for television, and is currently developing sci-fi feature Extrasensory with Ffilm Cymru Wales.

MIXING MOVIES WITH MONUMENTS TO MAKE MAGIC Anglesey’s stunning Beaumaris Castle will host special sunset screenings of treasured films this summer. The 13th century fortress in North Wales will see Indiana Jones rub shoulders with Baloo the bear as Welsh Government’s historic environment service (Cadw) and Ffilm Cymru Wales present classic adventure Raiders of the Lost Ark alongside Disney’s blockbusting new vision of The Jungle Book. One of the biggest films of the year, The Jungle Book magically fuses live action with ground breaking CGI, and features a stellar voice cast including Bill Murray, Scarlett Johansson, Ben Kingsley, Lupita Nyong’o, and Idris Elba as the menacing Shere Khan. As Steven Spielberg readies a brand new Indiana Jones movie, audiences at Beaumaris Castle will be able to experience his iconic archaeologist-cum-adventurer swinging through the Peruvian rainforest in his original film, from inside an enchanting location like no other. This comes at a time when the National Museum Wales in Cardiff celebrates the Year of Adventure with a special Treasures: Adventures in Archaeology exhibition. Tasty treats will be provided by local pop-up street-food stalls, including Tan Y Ddraig’s wood-fired pizzas, Espresso Eccellente’s coffee baristas, Black Dog Wine and more. Tickets are available from the Ucheldre Centre box office on 01407 763361 or box-office@ucheldre.org

YA S M I N ’ S B L O G T H E B I S TA N D E R Cardiff’s Iris Prize is the largest LGBT short film festival in the world, and it also provides educational outreach through making films with young people in and around Wales. The festival itself has recently been updated to an A-List festival by BAFTA, a status it also shares with Sundance, Cannes, Venice and Sundance. Its unique focus on LGBT issues ensures that these important topics are propelled to a wider stage: one that is being recognised not only in Wales, but outside of Wales, too. We were thrilled to meet Mark Williams from the Iris Project at Fitzalan High School in central West Cardiff last week. The cohort recently wrote, directed and shot a short filmed titled The Bistander which looks at the effects of bullying on a young Fitzalan pupil. Mark and the students also watched a series of short films that had been shown at Iris Prize film festival 2015. These films included Yeah, Kowalski, delightful and light-hearted coming of age film about a teenage boy with a crush at a pool party. This film, along with some others, was picked to show at the Fitzalan LGBT Film Festival, where their own film will also have its premiere to an audience of students, parents and teachers alike. There will be an Iris Outreach Education Day later this year, where all of the films made across schools in Wales will be shown, following a discussion on filmmaking lead by the young people.

Mark has been working with Iris since its inception, and carries out the education outreach work. He says “I’ve really enjoyed working with creative young filmmakers in schools across Wales to challenge perception of LGBT+ people using various tools including drama and comedy. This is a great way to change attitudes and improve acceptance of LGBT+ people and we’re delighted to have produced films covering LGBT+ issues which are now available to schools across Wales and internationally through our YouTube channel”. In 2012, Stonewall Cymru, a Wales-based LGBT charity, released a report that found over half of LGBT student have faced bullying at school. Along with having a huge impact on their school work, 41% of LGBT students report struggling with mental health related problems after being bullied at school. Iris Outreach ensures that LGBT visibility and film literacy firmly remains at the top of the agenda for young people in Welsh schools. Find more of Yasmin’s blogs at www.ffilmcymruwales.com

To celebrate our 10th anniversary this summer, the BFI Player is offering a selection of Welsh films.