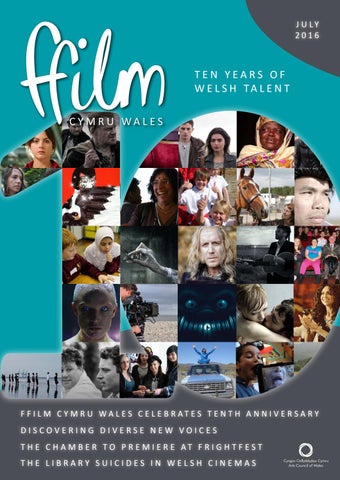 T E N Y E A R S O F W E L S H TA L E N T As we celebrate our tenth anniversary, our Chair Michael Gubbins reflects on the past, present and future of Ffilm Cymru Wales. “In this our 10th year, it is clear to see significant growth in Wales’ film sector. When we started, home-grown films were a rarity and it was tough to build a sustainable industrial sector. We also faced a challenge to ensure that film and film culture reached across the whole of Wales and to the most diverse audiences. We have now co-funded more than 50 feature films that have gone into production with Welsh talent at their helm, and more than double that with development support. The sector is maturing and we’ve been able to support eight Welsh companies at corporate level to build their capacity, including Flintshire-based Mad as Birds, whose TV series Minotaur was recently supported by Welsh Government’s Media Investment fund; Red and Black who produced Pinewood Wales’ first feature Don’t Knock Twice, which Ffilm Cymru Wales co-funded; and Severn Screen – who produce the Welsh Government supported series, Hinterland. Those achievements demonstrate the benefits of Welsh Government and Lottery funding working side by side. Our creative industries are a rapidly growing, interconnected ecology – where talent, crew and facilities work across film, television, games, animation, games and contribute to the wider economy with transferable skills. The challenges have not gone away but we think the foundations are getting stronger every day. Wales is now punching above its weight in our sector but we believe it can grow much more with the right will and support and that will be the driving mission for the next 10 years.” Michael Gubbins Chair, Ffilm Cymru Wales

Leading figures and emerging talent from across the Welsh film, television and tech industries came together in Cardiff to celebrate the tenth anniversary of Ffilm Cymru Wales. Filmmakers, producers, actors, festival and cinema heads, and film education practitioners were among the guests at the reception, held in Cardiff’s new One Central Square building, showcasing the breadth of the organisation’s activities, and demonstrating the array of creative and business talent in Wales it has been helping develop. The event featured screenings of new short films from some of the best emerging Welsh talent, music from Manic Street Preachers frontman James Dean Bradfield’s soundtrack to new thriller The Chamber, and an immersive preview of Wales Interactive’s forthcoming Virtual Reality game – a companion to Red and Black Film’s upcoming horror movie Don’t Knock Twice.

DISCOVERING DIVERSE NEW VOICES At a time when Wales couldn’t be more proud and has shone on the world’s stage, Ffilm Cymru Wales is equally proud of its support for home-grown film talent. It has just awarded over £80,000 to support home-grown Welsh filmmaking talent in its latest round of development funding. Awards go to:

C e n sor The debut feature from writer-director Prano Bailey-Bond and producer Helen Jones. The 1980s-set horror flick sees film censor Enid return to her childhood home to solve the mystery of a past trauma. Bailey-Bond has been tipped as ‘one-to-watch’ by Film4 after winning the Best Director award at UnderWire Festival. Anthony Fletcher co-writes whilst horror writer and film critic Kim Newman serves as Executive Producer.

I W ho H av e Nothi n g Marc Evans’ new film is a Shirley Bassey biopic from writer Brian Fillis that charts the legendary Welsh singer’s early life and rise to fame, while working as a single mother. The project builds on Marc’s previous work including Y Gwyll / Hinterland and Hunky Dory, and sees him reunited with his producer on Patagonia Rebekah Gilbertson (Edge of Love) of Rainy Day Films.

L ast S umm e r Writer-director Jon Jones’ feature film debut is a powerful coming-of-age story set in the rural beauty of West Wales one fateful summer. Ten-year-old Davy takes on the adult world as he, his brother and two best friends run away after a family tragedy threatens to pull their lives apart. Jon has an impressive track-record in television with credits including Odyssey, Da Vinci’s Demons and Andrew Davies’ Northanger Abbey for the BBC. Welsh producer Katherine Lannon (formerly of Ecosse Films) and line-producer Catrin Lewis-Dafis complete the core team. Additional funding was awarded to four projects already on Ffilm Cymru Wales’ sizeable slate. Random Deaths and Custard has been adapted from Catrin Dafydd’s darkly comic novel and will be directed by Chanya Button (Burn, Burn, Burn), produced by Emily Morgan and Executive Produced by Severn Screen’s Ed Talfan (Yr Ymadawiad, Hinterland). Supernatural thriller Mr Smith sees the embittered title character isolated from friends and family by the superpowers he dare not use, but hoping that love will allow him to become a hero again. Produced by Sue Asten and Camile Gatin, and written by Philip Palmer, the project has recently attached director Colm McCarthy, whose The Girl with All the Gifts is set to be released by Warner Bros this Autumn.

Ffilm Cymru Wales’ Head of Creative Sector Development Hannah Thomas comments “This latest development round is testimony to the talented Welsh writers, directors and producers who are generating and developing their own world-class intellectual property. We are also particularly pleased to see tangible results from our efforts to improve diversity and equality in this industry. It’s terrific to be supporting a female team behind a horror film; of the 19 individual writers, directors and producers supported in this latest round, 10 are women; and we have similarly seen increases in female representation in our BFI NET.WORK supported Beacons short film scheme, with 50% of the 18 short-listed projected directed by women. It’s a positive trend that we intend to continue.”

The newest member of our team Yasmin Begum blogs about her visit to Disability Arts Cymru’s latest workshop.

Disability Arts Cymru (DAC) is an organisation committed to celebrating the diversity of deaf and disabled people in arts and culture, widen participation in the arts and keep equality on the agenda. This year, DAC are undertaking a short film project called “Changing the Focus.” This participatory filmmaking project explores the portrayal of people with disabilities in the media and to what extent the portrayal has changed. DAC picked out a series of archive material from the 1950s onward that included representation of disability: both then and now. One of these films was a fantastic short animation produced by Purple Patch on the social history of people with disabilities here. Afterwards, participants were interviewed to unpack the film footage and to discuss the topics the film touched on, such as institutionalisation and language around disability. In these short conversations, participants were able to candidly talk about their own personal experiences, along with offering fresh insight into new directions for representation and disability both on-screen and off-screen. After lunch, the cohort broke out into groups to learn basic interviewing and camera skills. This allowed people from a variety of different backgrounds and ages to broach this huge topic to interview each other in an innovative and creative manner. DAC will be releasing and showing the film at six different dissemination events across Wales. These events will have “digital storytelling sessions” where guests are invited to bring their own archive to create a short film out of them. Additionally, copies of “Changing the Focus” will be distributed in schools across Wales with accompanying teaching resources for teachers. To hear more about the dissemination events or to learn more about the work DAC carry out, visit www.disabilityartscymru.co.uk Yasmin Begum Education & Communications Assistant Ffilm Cymru Wales

Sinemaes will offer a week of film-related activities, screenings, premieres and masterclasses at the National Eisteddfod in Abergavenny from 30th July â&#x20AC;&#x201C; 6th August. Check out what Ffilm Cymru Wales will be offering on Friday 5th August.

T e n Y e ars of W e lsh T al e n t As we celebrate our tenth anniversary, guests from across the Welsh film sector, including Catrin Ramasut and Berwyn Rowlands, discuss the past, present and future of Welsh film.

Y r Y mada w i ad / T he P ass i ng + Q&A When two young lovers crash their car into a ravine in the remote mountains of Wales, they are plunged into a lost world. Dragged from the river by a mysterious figure, they are taken to a ramshackle farm, a place untouched by time. As events unfold we learn the explosive truth about the young coupleâ&#x20AC;&#x2122;s past. More unsettling still, we discover the ghostly truth about Stanley, and the tragedy of the valley he once called home. The Passing is a new film directed by Gareth Bryn (Hinterland, Pen Talar, 35 Diwrnod), written by Ed Talfan (Hinterland) and produced by Kate Crowther (Bypass). The film stars Mark Lewis Jones, Annes Elwy and Dyfan Dwyfor.

T H E C H A M B E R L A N D S W O R L D P R E M I E R E AT F R I G H T F E S T The tense underwater thriller stars Swedish actor Johannes Bah Kuhnke, in his first film role since the critically acclaimed Force Majeure propelled him to international recognition. A special ops unit commandeer a commercial research vessel and its submersible off the coast of North Korea to locate a mysterious item at the bottom of the Yellow Sea. When an explosion causes the sub to overturn and take on water the crew begins to understand that not all of them will escape and a fight for survival ensues. The Chamber also stars Charlotte Salt (The Musketeers), James McArdle (Star Wars: The Force Awakens), and Elliot Levey (Spooks: The Greater Good), and the debut original film score by James Dean Bradfield of the Manic Street Preachers. Produced by Welsh producer Paul Higgins, the film was shot at the Sony UK Technology Centre’s Ffilm Factory 35 and Swansea Bay Studios in South Wales. The film will be released in the UK later this year through StudioCanal.

The Welsh-language thriller will be released in cinemas from 5th August. The Library Suicides (Y Llyfrgell), the debut feature from award-winning director Euros Lyn (Broadchurch, Happy Valley), and based on Fflur Dafydd’s bestselling novel Y Llyfrgell, is an offbeat thriller set in the National Library of Wales that explores the secrets and lies at the heart of storytelling, and asks who has the right to tell the story. Produced through Ffilm Cymru Wales’ Cinematic scheme, The Library Suicides stars Catrin Stewart (Doctor Who, Stella), who won the Best Performance in a British Feature Film award following the film’s premiere at last month’s Edinburgh Film Festival. The film is being released across the UK by Soda Pictures from 5th August, and here’s where you can see the film in Wales. Watch the trailer at www.ffilmcymruwales.com Chapter Arts Centre, Cardiff 5th - 11th August Q&A on 5th August

To celebrate our 10th anniversary this summer, the BFI Player is offering a selection of Welsh films.