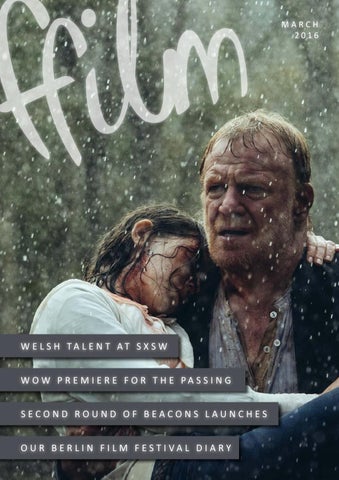 WALES ONE WORLD From the snowy Tibetan mountains, via the south Pacific and the back roads of Brazil to the Tregaron hills, Wales One World Film Festival, Wales’ traveling festival of world cinema, is back with a wonderful selection of films from around the globe. Starting Thursday 10th March, this intriguing, popular and long-running festival gives cinema goers across Wales the chance to broaden their horizons from the comfort of their local cinema - and each year has them avidly coming back for more. New Welsh movie Yr Ymadawiad / The Passing has its Welsh premiere on the opening night of the festival in Aberystwyth. Written and produced by Ed Talfan and directed by Gareth Bryn, the team behind hit detective drama Hinterland/Y Gwyll, this supernatural melodrama was filmed near Tregaron and features strong performances from its cast, Mark Lewis Jones, Annes Elwy and Dyfan Dwyfor. Up and coming filmmakers will not want to miss the masterclasses with Ed Talfan and Gareth Bryn before both screenings in Aberystwyth and Cardiff, and there will also be a Q&A session with the cast and crew after the film. Chile’s greatest filmmaker, and one of the greatest documentary makers in the world, Patricio Guzman is coming to the WOW Film Festival in Cardiff to give a masterclass linked to the Wales premiere of his latest masterpiece. The Pearl Button effortlessly ranges from the cosmic to the microcosmic, taking in interviews with the last surviving Patagonian water nomads and those who lived through Pinochet’s atrocities. Nobody else really makes films his way, expressing deeply humanist, spiritual ideas so effortlessly. WOW Festival director David Gillam said, “It’s a great pleasure to bring so many varied and interesting films to Wales for the first time. And a real honour to host Patricio Guzman, Chile’s answer to Ken Loach, in Cardiff.” Mining the archives of Russian silent movies, Guy Bartell of Bronnt Industries Kapital has composed a new soundtrack to accompany screenings of Arsenal, an anti-war film from 1929. Set in the aftermath of the Russian civil war, the film’s striking imagery will be brought to life by Bartell’s expertly judged, resonant score. With Arsenal on tour to Cardiff, Swansea, Aberystwyth and Mold from Sunday 13th to Wednesday 16th March, this is a unique chance to see a completely different style of filmmaking quite unlike anything you have experienced before. WOW Film Festival always celebrates the fact that world cinema has a far higher proportion of women filmmakers and strong female characters than mainstream film. For 2016, WOW has adopted the new ‘F-rated’ scheme, which helps audiences choose films that are either directed or written by women, or have significant female roles. Look out for films such as Tanna, made on the tropical island of Vanuatu in the Pacific ocean, which sees beautiful Wawa fall in love with her chief’s son. Sworn Virgin tells the story of Hana, a young woman who follows the age-old Albanian custom of taking a vow of chastity and living as a man in order to escape an arranged marriage. So vote with your feet and join WOW in supporting women in world cinema. In This Changes Everything, the climate change documentary directed by Avi Lewis, Naomi Klein is a woman on a mission to change the world’s dependence on fossil fuels. We meet women and their families in Canada, the US and India fighting for their rights to protect their farms and ancestral lands from the abuses of big oil companies and power plants. WOW is bringing together panels of local experts in climate change and sustainability to debate the issues raised in the film after each screening. 2016’s WOW Film Festival takes place at Aberystwyth Arts Centre, Chapter in Cardiff, Taliesin Arts Centre in Swansea and Theatr Clwyd in Mold from Thursday 10th March. For the full programme of 2016’s WOW Wales One World Film Festival, head to www.wowfilmfestival.com

BFI NET.WORK Wales has announced the second iteration of their short film scheme.

Beacons shines a light on outstanding film talent from Wales, showcasing writers, directors and producers, and helping them establish their credentials for feature production. BFI NET.WORK Wales and Ffilm Cymru Wales are looking for bold and unique voices, original storytelling, visual flair, and production values befitting to the big screen and film festival awards categories. The first Beacons scheme was launched in February 2015, and successful short films included Catherine Linstrum’s Things That Fall From The Sky, Jay Bedwani’s gay Elvis documentary Pink Suede Shoes, and Carl Rock’s ‘Welsh Gremlins’ adventure The Truthful Phone. Produced by Katie Pow and based on Terry Jones’ (Monty Python) short story, The Truthful Phone recently secured £25,000 from a successful Kickstarter campaign, as well as Welsh star Michael Sheen for the cast. Beacons awards range from £5,000 to £15,000, with producers also able to raise further finance through crowdfunding or third party deals. This will give producers an opportunity to test their skills in a professional capacity. The second Beacons short film scheme will be open for applications from 21st March. For full details and application forms, please visit www.ffilmcymruwales.com

Ophelia Lovibond in Things That Fall From The Sky

Carl Rock and Katie Pow, makers of The Truthful Phone

Behind the scenes of In This House

SXSWALES Two filmmakers will be representing Wales at the 2016 South by Southwest Film Festival. Jamie Adams and Rob Alexander have both had their latest features selected for the film, music and interactive media festival in Austin, Texas, which runs from the 11th to the 19th March. Writer-director Jamie Adams’ new film Black Mountain Poets will have it’s US premiere as part of the Narrative Spotlight strand. The romantic comedy-drama sees two professional con artist sisters go on the run and assume the identities of The Wilding Sisters, guest stars of a poetry retreat in the depths of the Black Mountains. A starry cast is led by Alice Lowe (Sightseers) and Tom Cullen (Weekend). Adams’ previous films include Benny & Jolene, starring Craig Roberts, and A Wonderful Christmas Time, and a new project - Momma Gonna Knock You Out - is currently in development with Ffilm Cymru Wales.

Rob Alexander has received support from BFI NET.WORK Wales to attend SXSW with his new feature documentary Gary Numan: Android In La La Land. Part music doc, part road trip and part love story, the film follows the godfather of electronic pop music on tour, in the studio, on vacation and as he packs up home in leafy England and moves to Los Angeles. Ffilm Cymru Wales have also supported a forthcoming project produced by Alexander and his company Perfectmotion. Breath is a multi-sensory documentary and interactive installation exploring the relationships we have with our bodies and the planet we inhabit.

S U S TA I N t rA a i nBi nIg Le Iv eTn tY We are delivering free Carbon Literacy training to help individuals working in film and television get to grips with sustainability and uncover what can be done. Successful completion of the course equips delegates with the knowledge and skills to reduce their person carbon footprints and to create productions in a more sustainable way.

Across the one day course, delegates â&#x20AC;˘ will understand the impacts of climate change and how to take action to reduce carbon emissions in both the workplace and at home â&#x20AC;˘ will have the knowledge and skills to create productions in a more sustainable way

albert is the leading body tacking the environmental impact of the UK screen art industry. albert facilitates collaboration in the UK broadcast industry, addressing issues of environmental sustainability by promoting and supporting best practice across operations and output. Find out more at wearealbert.org

As we draw a line under the Berlin Film Festival and European Film Market for another year, here are eight things that Ffilm Cymru Wales staff members got up to over a very intense four days in the beautiful city of Berlin! 1. Held over 100 meetings on behalf of all the talent that we represent. 2. Took part in Cine-Regioâ&#x20AC;&#x2122;s meeting of 42 European Film Funds, where our Chair, Michael Gubbins, presented his report on Diversity in European Film. 3. Strengthened links with our minority European language partners through the Glocal Cinema community 4. Met with 24 international sales agents.

5. Walked an average five miles a day between the Martin Groipus Bau, The Mariot Hotel and the Ritz Carlton. 6. Shamelessly gawped at Colin Firth while he enjoyed a beer in the lobby of the Ritz Carlton. 7. Saw zero films... the standard problem of having a busy festival schedule. 8. Ate approximately ten servings of currywurst. It was another great festival, and it was encouraging to see so much Welsh talent out there doing their thing â&#x20AC;&#x201C; for a small country we can certainly pack a punch! HANNAH THOMAS

OUT NOW ON DVD