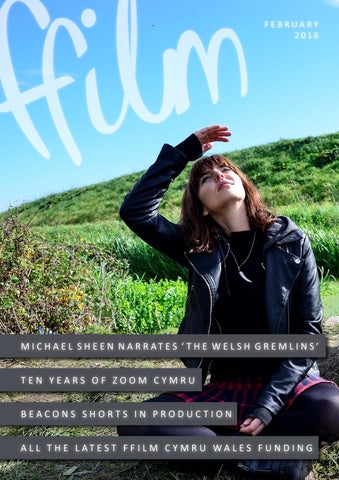 Welsh BAFTA nominated director Carl Rock’s new short The Truthful Phone is an eighties-inspired fantasy based on Terry Jones’ short story. The magic of Labyrinth meets the sumptuous fantasy of Guillermo Del Torro in this dark comedy about nasty old Mae Morris, who unleashes a gypsy curse that exposes her secrets to the very townsfolk she lives to torment. An homage to classic eighties fantasy films like Labyrinth, The Goonies, The Dark Crystal and Gremlins, The Truthful Phone is a feel good, fast paced, high-concept comedy with Jim Hensonesque creatures wreaking havoc in a craggy, remote village. The Truthful Phone has been supported through BFI NET.WORK Wales and Ffilm Cymru Wales’ Beacons short film scheme. On launching the project’s successful Kickstarter campaign, Terry Jones, Monty Python member and writer of the short story The Truthful Phone, said: “I’m delighted that The Truthful Phone is being given the opportunity to be made into a film short, particularly as director Carl Rock, who comes from the same part of Wales as I do, will be setting the story in Colwyn Bay. The Welsh landscape is a perfect setting for this tale, and I hope the Kickstarter campaign reaches its target so that a wider audience can enjoy this dark fantasy comedy.” Carl Rock, Writer/ Director said: “The Truthful Phone is an homage to all the great eighties films that I loved growing up; Labyrinth, Goonies and Gremlins. A dark fantasy comedy set in Wales, it takes inspiration from mythic Welsh folklore and the tradition of surreal British comedy, mixing it up with creatures made and animated by one of the best puppeteers in the world, Andy Heath, who has worked on Star Wars and The Muppets.” Find out more at www.ffilmcymruwales.com

C O M PA N Y S U P P O R T Four Welsh film companies have the opportunity to expand their capacity and growth potential through new Company Support awards from Ffilm Cymru Wales. As part of their commitment to cultivating a thriving and diverse Welsh film sector, Ffilm Cymru Wales is targeting funding at indigenous talent and companies that can grow the local creative industries infrastructure and provide jobs, and the development of wider intellectual property.

IE IE PRODUCTIONS Founded by Catryn Ramasut and musician Gruff Rhys, ie ie Productions is known for cross-media music documentaries Separado! and American Interior, which offered a range of award-winning content including a feature documentary, app, album, merchandise and a book. They will use the funding to expand their operation with the recruitment of four further employees to develop their core operation, supporting their developing slate and its wider exploitation, as well as engaging with expert entrepreneurs to further innovate their business.

MAD AS BIRDS Mad As Birds Films, the company behind last year’s Dylan Thomas drama Set Fire to the Stars, starring Elijah Wood, will use their award to establish a permanent office in North Wales, which will help to generate jobs in the area.

DOGS OF ANNWN In addition to expanding their staff and setting up an office, South Wales’ Dogs of Annwn plan to launch a boutique post-production service, offering editing and digital effects to film and media productions. The company are currently following up Devil’s Bridge with their haunting new Cinematic-supported psychological thriller The Lighthouse.

JOIO Working across television and advertising, as well as feature film production, Joio (producers of the award winning S4C project Tir) will expand their capacity with a focus on business affairs and establishing a company base in Cardiff. Find out more at www.ffilmcymruwales.com

Set Fire to the Stars from Mad As Birds Films

Organisers of the Iris Prize have launched a library of short films produced by young people dealing with LGBT bullying. The short films have been produced by secondary school pupils from all over Wales over the past two years. Available free of charge on YouTube, the eight short films are all unique telling a different story using comedy as well as hard hitting drama to communicate their message. Figures released by Stonewall confirm that over half of all young gay people experience homophobic bullying and of them, 41% have attempted or thought about taking their own life. 56% of young people deliberately self-harm and this rises to 61% if subjected to bullying. Andrew Pierce, Chair of the Iris Prize said: “There’s something quite special about empowering young people to deal with these important issues on their own terms. We’ve been fortunate to have worked with some incredibly talented and brave pupils from all over Wales to produce these films. I’m encouraged that we have schools in Wales who are willing to address issues of homophobic bullying head on. These films can now be used by other schools as a starting point for debate and discussion. The films can also be integrated into different parts of the curriculum.” “Thanks to the generous support of Ffilm Cymru Wales we are able to deliver the project for another year and during 2016 we will be visiting 5 secondary schools in Wales, and by the end of the year we will have another five films to add to the library.” Janine Barnett-Phillips, Woodlands High School, Cardiff said: “Pupils who attend Woodlands High School have special needs. Thanks to the approach of Team Iris in treating the pupils as equals it has been a joy to see how they developed as individuals during this project. The level of discussion and debate, stimulated after making and watching short films, continues to make me proud of the individuals I teach. They are extraordinary and Team Iris have inspired them and helped to raise their self-esteem. The pupils from Woodlands more than most pupils understand the impact that being different can have on your life and this has helped them understand issues of homophobic bullying.” The 8 short films can be found on the Ffilm Cymru Wales YouTube channel.

TEN YEAR S OF ZOOM CYMRU Zoom Cymru is celebrating ten years of the international film festival and invites you to be part of this year’s big event! From 14th - 18th March 2016 across south Wales, the festival will feature an exciting selection of international films, workshops / teaching resources, special events and more. The full programme will go live very soon. Film screenings will be free to attend and workshops are just £1 per person. They will be split into primary and secondary school activities. At this stage too, we ask that organisations/schools please consider transport arrangements/budgets for attending. Submit your films now to be considered for the Zoom Young Filmmaker Awards: The ZYFA’s 2016 The countdown is on to The ZYFA’s 2016 – a glitzy ceremony taking place on 18th March 2016 in Bridgend, South Wales. It’s a great chance for showcasing the work of young people aged 8-25 who have made short films and want to see them on the big screen.   Comedies, music videos, dramas, documentaries and animations by young people are just some of the short film types that the ZYFA’s honour. Read more at www.ffilmcymruwales.com

BEACON S Three of BFI NET.WORK Walesâ&#x20AC;&#x2122; Beacons scheme short films have gone into production - check out some of the photos here. THIN G S THAT FALL FRO M THE S KY Writer / Director: Catherine Linstrum Producer: Stella Nwimo, Bedlam Productions A story about collisions - between a swan and a power line, and between a muddy man in a ditch and a woman with blood on her hands.

PINK SUEDE SHOES Director: Jay Bedwani Producer: Grant Vidgeon, The Festivals Company Jasun Watkins brings his pink, brash and very camp Elvis impersonation act to the biggest Elvis tribute festival in Europe. We join him in the days leading up to the competition, as he recalls how his troubled family life and childhood suffering fed his desire for fame. Will Pink Elvis win over the residents of this small Welsh seaside town?

PA N I C Writer-director: James Cookson Producer: Dominic Thomas Since Dylanâ&#x20AC;&#x2122;s mother passed away his nightmares have been becoming real, more violent and seeping into his waking hours. But how do you escape yourself?

A feature length music documentary that tells the unlikely tale of how two Welsh farming brothers turned their farm into one of the most successful recording studios of all time, home to four decades of great British rock. Rockfield Studios was the place where Freddie Mercury first laid down the notes of Bohemian Rhapsody, where Ozzy Osbourne woke everyone up by firing a shotgun, and where Oasis recorded their hit album (What’s the Story) Morning Glory?

The true story of a Welsh soldier who survived imprisonment by the Japanese during WWII and went on to become a successful businessman in Hong Kong. But though he seemed to be a man who had everything, he could never find peace, and used his wealth and influence to exact revenge upon the men who had tortured him. Produced by Bright Cold Day Films (Containment) in partnership with Lookout Point (known for high-end television such as War and Peace) and written by Welsh writers James Leighton and Ben Syder, this a gripping revenge thriller, a real life Count of Monte Cristo set against the backdrop of Hong-Kong and Japan during the economic boom of the 60s and 70s.

MOMMA GONNA KNOCK YOU OUT Co-developed with the BFI, Welsh filmmaker Jamie Adams’ latest feature will explore the relationship between a mother and daughter, whose shared love of 80s rap brings them to an acceptance of love and marriage. Writer/Director: Jamie Adams Producer: Margaret Matheson

JASIA Jasia our stubborn little hero lives happily with Veronika, her single, trumpet-playing, diva of a mother in a colourful world of music, circus, friends, and elephants. War comes and Jasia is left an orphan. The trumpet becomes symbolic of her mother’s love and gives Jasia the will to survive, her mission is to retrieve it and learn to play the music Veronika played in happier times. Writer: John McNally Director: Magda Osinska Producer: Sarah Cox Executive Producer: David Sproxton Production Company: Arthur Cox Ltd

Here are some of the latest projects from Welsh talent to receive development funding from Ffilm Cymru Wales.

Kevin Allen’s radically surreal and erotic film of Dylan Thomas’s ‘Under Milk Wood’ is now available to watch at home. Starring Rhys Ifans and Charlotte Church, Under Milk Wood is the first cinema production of Dylan Thomas’s brilliant, haunting radio play since Elizabeth Taylor and Richard Burton’s 1972 film. With a screenplay written by Murray Lachlan Young, Michael Breen and Kevin Allen, Under Milk Wood veers away from the traditional, literal reflection of Thomas’ original work and instead explores some of the more visceral elements of the funny, filthily fluid and magical dreamscape of the work whilst staying faithful to Dylan Thomas’s original text.

Life sucks for Jim. His best friend Michael is now hanging with the cool kids and Jim’s only companion is his dog. He’s stuck in a small town where nothing exciting ever happens, until… Dean, a mysterious American, moves in to the house next door. Dean is older, good-looking, and in Jim’s eyes the coolest guy he’s ever met. Jim can’t believe his luck. Dean offers him friendship, helps him win the girl of his dreams and he soon becomes the most popular boy in school. But when it turns out Dean is hiding a dark secret, Jim is forced to question if his newfound popularity is worth it. Submarine star Craig Roberts’ directorial debut Just Jim is out now on DVD from Soda Pictures.

The DVD and Blu-ray sets also feature the Welshlanguage version Dan y Wenallt, which was selected as the UK submission for Best Foreign Language film at the 2016 Oscars.