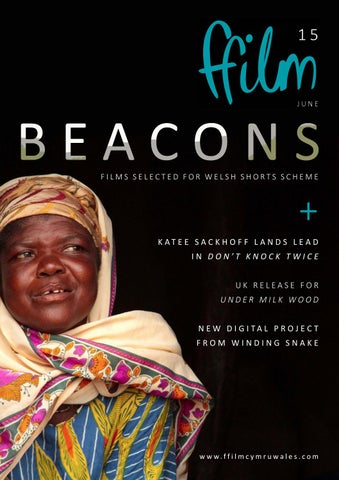 Katee Sackhoff (Oculus, Riddick, Battlestar Galactica) will star in the supernatural horror film Don’t Knock Twice, directed by Caradog James and being sold by Content Media. The film will shoot in July in the UK.

The film is being produced by Red & Black Films’ John Giwa-Amu (The Machine, The Call Up) and Seymour Films’ Claire Moorsom. Content’s President of Film, Jamie Carmichael, serves as Executive Producer.

In the vein of Candyman meets The Ring, Don’t Knock Twice is based on a psychologically terrifying urban legend. To save her estranged daughter, a guilt-ridden mother must uncover the terrifying truth behind the urban legend of a vengeful, demonic witch.

The film marks a re-teaming between Content Media and Caradog James and his award-winning, UK based Red & Black Films production banner. They first partnered together on the cult sci-fi action thriller The Machine.

Metrodome Distribution has acquired UK and Ireland rights to the feature version of Dylan Thomas classic Under Milk Wood from Metro International. Rhys Ifans (The Amazing Spider-Man) and singer Charlotte Church star in the drama, which will debut at this month’s Edinburgh International Film Festival. Kevin Allen (Twin Town) directs the surreal story in which Blind Captain Cat (Rhys Ifans) is tormented in his dreams by his drowned shipmates, and the innermost thoughts of the inhabitants of a fictional small Welsh fishing village Llareggub. The deal was negotiated by Metrodome MD Jezz Vernon and Metro International’s head of sales Natalie Brenner.

S4C, Tinopolis, Goldfinch Pictures and Ffilm Cymru Wales. The film is also booked into a number of specialist UK summer festivals including Latitude, Festival No. 6, Port Eliot and The Green Man before Metrodome releases theatrically on October 27, Dylan Thomas’ birth date. Jezz Vernon, Metrodome MD, said: “It’s just an amazing filmic experience – we’re delighted to work with the team to bring it to UK and Irish audiences. “It’s a wonderful piece of work – entirely its own entity, a brilliant contemporary adaptation of the original work.”

The film adaptation, from wrtiers Murray Lachlan Young, Michael Breen and Allen, is the first of Thomas’ classic 1954 radio drama since Elizabeth Taylor and Richard Burton’s 1972 feature. Under Milk Wood is presented by fFatti fFilms and Metro International, in association with

BFI NET.WORK Wales and Ffilm Cymru Wales are proud to announce the projects selected for their short film scheme Beacons. The nine teams will now take their projects into production, with additional support from Edicis. The successful projects are:

C omin g H ome Writer-director: Ewan Jones Morris. Centred around John, a man in his 70s living on a remote farmhouse, Coming Home is a surrealist exploration of life, death and the what lies in between.

I n T his H ouse Writer-director: Owain Hopkins Producer: Alan Humphreys Ben, a blind man, lives in a strangely beautiful co-existence with a woman he doesn’t know is living in the attic. Imaginatively facing the trials of day-to-day living without being caught, she must remain hidden.

P anic Writer-director: James Cookson Producer: Dominic Thomas Since Dylan’s mother passed away his nightmares have been becoming real, more violent and seeping into his waking hours. But how do you escape yourself?

P ink S uede S hoes Director: Jay Bedwani Producer: Jessica Colman Jasun Watkins brings his pink, brash and very camp Elvis impersonation act to the biggest Elvis tribute festival in Europe. We join him in the days leading up to the competition, as he recalls how his troubled family life and childhood suffering fed his desire for fame. Will Pink Elvis win over the residents of this small Welsh seaside town?

T he T ruthful P hone Writer-director: Carl Rock Producer: Katie Pow Based on Terry Jones’ short story, The Truthful Phone is a dark comedy is about nasty pensioner Mae Morris - local busybody, pet kidnapper and husband killer - who unwittingly unleashes a magical gypsy curse exposing her secrets to the very townsfolk she has been tormenting.

T he V ideo M an Writer-director: Tony Hurley Producer: Samantha Price A drama compiled of home movie footage and disjointed memories to allow Emily to piece together her brother’s disappearance, her father’s demise and exercise her own demons.

T hings T hat F all F rom T he S ky Writer-director: Catherine Linstrum A story about collisions - between a swan and a power line, and between a muddy man in a ditch and a woman with blood on her hands.

Z ero S um Director: Jimmy Hay Writer: James Gillingham Producer: Edward Thomas In the near silence of space, Dana wakes up. As she slowly comes to life, she looks out of the window to see that her ship is one of hundreds orbiting an alien planet. Beacons was devised to shine a light on the new generation of filmmaking talent in Wales, while providing a crucial step in their creative and career development. Following their awards, producers will now have the opportunity to raise further finance through crowdfunding or third-party deals before progressing into production. For further updates on Beacons, connect with BFI NET.WORK Wales on Twitter and Facebook.

Following on from A Bird in a Cage project in 2014, Learning to Fly is an ambitious new art and digital media project from Winding Snake Productions. The project, funded by Arts Council of Wales, First Campus at the University of South Wales and Ffilm Cymru Wales, saw young people from Tir-y-Berth Primary School in Caerphilly collaborate with teens from Abertillery Comprehensive School in Blaenau Gwent to write a new fairy tale and produce an animated film. Producer Amy Morris says “Without Arts Council of Wales and the additional support from Ffilm Cymru Wales and First Campus we would not have been able to make this excellent body of work that the children developed in such a wonderful way.” The film, created by Winding Snake and the students, tells the story of an evil usurper king, who has banned and locked up all the books in the land. His three daughters and their friend go on a journey to free the books, which takes them across the vast sea and they have many magical encounters along the way. The film uses a set made from a humble door frame. It was transformed into a mosaic world, featuring marbles, glass and nails. This proved quite challenging when moving the set into Winding Snake’s studio at Chapter in Cardiff. The mosaic work was masterminded by Newport artist Stephanie Roberts who worked directly with the children, and the outcome is a beautiful landscape made vivid and animated by the raw materials. Other elements of the production worth noting are the painstakingly detailed constructed books that would not look out of place in a regal dolls house. There is also a tapestry of a bookshelf featuring the titles of many famous books, both recent and classic. Lena Dunham’s “Not That Kind of Girl” fits snuggly on the makeshift bookshelf along with “The Old Man and the Sea”. Celebrated Welsh storyteller Daniel Morden, and the widely renowned poet Mab Jones helped in the pre-production stages of Learning to Fly by working with the groups to develop characters, the importance of stories and narrative structure. One of the key factors in developing this film was the school report “Arts in Education in the Schools of Wales” by Professor Dai Smith and the response to this by the Welsh Government. This report by Professor Dai Smith outlined the benefit of using creative practices in education.

GUIDELINES Ffilm Cymru Wales have just published their new Development and Production Funding guidelines and application forms. If you’re seeking support for your film project, find out more on our website. DE V ELOPMENT F U NDING Ffilm Cymru Wales aims to identify and nurture Welsh filmmakers – particularly producers, writers and directors - by supporting and encouraging the development of their work and ambitions. We are also keen to encourage films with Welsh cultural content, reflecting Wales and Welsh life, as part of our portfolio. We offer: • Our unique Magnifier approach to the development and production of feature films. • Project specific advice and assistance • Professional development and mentoring • Advice, funding and information on the exploitation of the Intellectual Property and brand extension of a film, including cross-media opportunities and marketing and social media opportunities • Advice and assistance with PR/branding and marketing • Encourage extended networks and collaborative working across the creative industries, arts, education, technology and wider sectors. • Encourage more sustainable business practices.

PROD U CTION F U NDING Ffilm Cymru Wales aims to provide new opportunities for Welsh (born and/or resident) filmmakers to get their films produced, increasing the range scale and number of films made. Particular emphasis will be placed on supporting Welsh producers, writers, writer-directors and directors but where Welsh talent is not leading the project, additional benefit might be provided through co-production or from mentoring opportunities offered to aspiring writers, directors, producers and Head of Department. We offer: • Our unique Magnifier approach to the development and production of feature films. • Project specific advice and assistance • Co-financing for a minimum of three theatrical feature films per annum (at least one of which will be in the Welsh language) • Funded support for companies wishing to increase company capacity, extend the intellectual property of their film proposals and who wish to develop cross media/cross art approaches. For more information and to download the Development and Production Funding guidelines and application forms, visit www.ffilmcymruwales.com