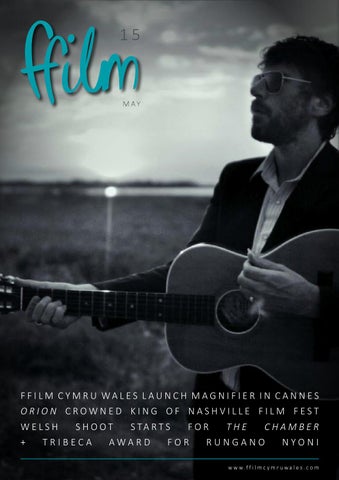 Ffilm Cymru Wales is committed to helping those we fund and work with make the most of their good ideas. That’s why we’ve launched a new and systematic approach – Magnifier. Why have a new approach? Magnifier aims to: • Explore the full-range of potential value inherent in ideas. Value comes in different shapes and forms. We’re interested in supporting the development of additional revenue opportunities, but also, improving audience reach, and wider benefits such as educational material or experiences that are often not explored. This might include opportunities to develop wider intellectual property, such as games, stage or screen adaptations, publications, exhibitions, events, soundtracks or educational materials, for example. • Consider who the audiences for a project might be; where they are; what they value, how they behave, and how to reach them. To inform audience development strategies. • Encourage shared learning amongst participants, guest experts and through shared research. We’ll collectively learn from what works, and what doesn’t. • Encourage extended networks and collaborative working across the creative industries, arts, education, technology and wider sectors. • Encourage more sustainable business practices.

H o w i t wi l l w o r k Magnifier works on the principle of aligned interests. It’s to the benefit of filmmakers, their collaborators and funders to get the most value and reach from ideas. The approach will not be prescriptive. What works for one idea, will not necessarily translate to another idea. Producers and the talent they are working with will decide what and how they want to develop their ideas. We hope that those who participate in the Magnifier approach will benefit from taking a broad view of their project, its value and its potential reach, whether or not that project is funded by Ffilm Cymru Wales. It’s about a mind-set, an approach, a culture of maximising value. It is likely to have its best fit where there are open minds, a willingness to share, test and adapt.

The p ra c t i c a l i t ie s We have introduced new guidelines and application forms to capture useful information and thinking around the potential of your idea. This will also help us take a more inclusive approach to the make-up of cohorts and those we offer funding and wider support to. For those of you applying for development funding, we will invite short-listed applicants and their teams to participate in a Magnifier Cohort. There will be two cohorts per year. They are not compulsory, but we do expect them to be mutually beneficial to attend. Each cohort will include invited applicants, invited experts from a variety of arts, media, education and wider sector areas and market specific expertise. Cohorts will also include alumni, sharing their experiences of what’s worked and what they’d do differently. Cohorts are the start of a process. They are an initial scoping day that helps applicants and Ffilm Cymru Wales be better informed about the choices that follow. For the applicant: what and how they plan to pursue value opportunities and develop their audiences and business practice; and for Ffilm Cymru Wales – we’ll be better informed in our funding decisions.

F u n d ing It will not be compulsory for invited applicants to attend cohort sessions, but we encourage participation and Ffilm Cymru Wales may use learning from the cohort sessions to inform funding decisions that we make. In addition to informing our development funding decisions, we may use learning from the Magnifier approach to inform our Company Support and Education funding awards, where they point to opportunities for us to address barriers to unlock value. For example, there might be limitations on company capacity or expertise to further the wider development of intellectual property that could be supported by Company Support funding; or a project might present opportunities to develop tailored education resources for schools. Where opportunities arise we will invite applications for funding. However, there will be open calls for these strands for funding and awards will ultimately be made on a competitive basis.

The F u t u re We expect between 50 and 70 projects and teams to have access to a Magnifier Cohort session over the next 3-years. Additionally, we anticipate adding open sessions for anyone interested in the programme to access. Shared and adaptive learning is critical. There will be an online forum; shared research and case studies and we are developing international partnerships to add a wider perspective.

In The Chamber, a special ops unit commandeer a commercial research vessel and its mini submersible to locate a mysterious item at the bottom of the Yellow Sea. When an explosion causes the sub to overturn and take on water the crew begins to understand that not all of them will escape and a fight for survival ensues.

The Chamber is the first feature film from director Ben Parker, and is produced by Jen Handorf, Paul Higgins, and executive producer Hugh Spearing Production financing for the film comes from Fields Park Media Partners, Ffilm Cymru Wales and Great Point Media. Post-production services will be provided by Dragon Digital based near Cardiff, where the film is being shot.

THE MAN WHO WOULD BE KING Following its premiere at Tribeca Film Festival in April, Jeanie Finlay’s new feature documentary won the Grand Jury Prize at the Nashville Film Fest. Orion: The Man Who Would Be King tells the story of Jimmy ‘ORION’ Ellis, a mysterious masked singer launched into the world by Sun Records in the aftermath of Elvis Presley’s death and how the ‘Elvis is alive’ myth was born. The film received production finance from Ffilm Cymru Wales, and Dewi Gregory from Caerphilly-based Truth Department is producer on the documentary. As well as the honour of winning the Grand Jury Prize, the Orion team were also gifted a limited edition Les Paul guitar by event sponsor Gibson!

You can view the trailer for Orion: The Man Who Would Be King at www.ffilmcymruwales.com

Kathy Speirs is attached to produce Matt Redd’s Horizonsfunded rom-com Joe & Katie Are In A Relationship. Both Matt and Kathy have been awarded places on the Cross Channel Film Lab with the project. Piers Sanderson & Paul Rhys will co-direct documentary feature Breaking Barriers, which follows the race to beat the World Land Speed record by three international teams. They have been awarded Horizons funding to shoot a trailer in Australia prior to pitching at Sheffield Doc/Fest.

Writer Phil Rowlands just returned from Canada for his tri-lingual feature Echoes, based on his grandparents’ experience of emigrating to Canada in the late 19th century. The filmmaking team held a table reading with Aboriginal actors, and Phil will be co-writing with Canadian Aboriginal writer Jordan Wheeler. Award-winning documentary and artist filmmaker Joanna Wright has been awarded funding to attend EAVE with her project Atomfa, documenting the decommissioning of the Trawsfynydd nuclear power station in North Wales.

Please come dressed up as your favourite Film character

Buy tickets on arrival or book online at www.filminafan.com contact DAnsa on 01639 751 067 to request community transport

S creening + Q & A Wednesday, 10 June 2015 - 6:00pm Chapter Arts Centre, Cardiff After the death of his mother, a teen (George MacKay) turns to a life of crime to make ends meet. Bypass is the second feature from writer-director Duane Hopkins (Better Things, Cannes Film Festival 2008). The film is by supported by the British Film Institute (BFI), Ffilm Cymru Wales, Torino Film Lab and Film i V채st, and produced by Third Films. Q&A following the screening with Samm Hailley. Public tickets available from www.chapter.org