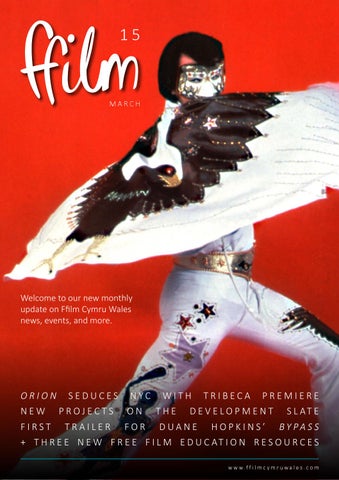 ORION The man who would be king

Ffilm Cymru Wales supported documentary selected for World Premiere at Tribeca Film Festival. ORION: The Man Who Would Be King, the latest feature documentary from award-winning director Jeanie Finlay (Glimmer Films) will receive its World Premiere at the upcoming Tribeca Film Festival in New York this April. Tribeca Film Festival is presented by AT&T. The film tells the story of Jimmy ‘ORION’ Ellis, a mysterious masked singer launched into the world by Sun Records in the aftermath of Elvis Presley’s death and how the ‘Elvis is alive’ myth was born. The film received production finance from Ffilm Cymru Wales, and Dewi Gregory from Caerphilly-based Truth Department is producer on the documentary. Speaking on behalf of the filmmaking team Dewi Gregory commented, “We’re really thrilled to be premiering the film at such an important and prestigious festival as Tribeca and we look forward to sharing ORION’s amazing story with audiences.” Read more at www.ffilmcymruwales.com

The new trailer for Bypass is available to watch on the FfCW YouTube channel. This contemporary drama is a morality tale of society’s feared and forsaken, as Tim, a good kid and a criminal, struggles to keep his family alive at all costs. Bypass stars rising talent George McKay (For Those in Peril, How I Live Now) and Game of Thrones’ Donald Sumpter. The film will be released in the UK in April. Produced by Wales’ Kate Crowther with Sam Haillay, Bypass follows writer-director Duane Hopkins’ critically-acclaimed debut Better Things, which premiered at the Cannes Film Festival in 2008. A truly European production, Bypass was co-funded by Ffilm Cymru Wales, the British Film Institute, the Torino Film Lab in Italy and Sweden’s Film I Väst. View the trailer at www.ffilmcymruwales.com

CONCRETE PLANS A gritty thriller set in the Brecon Beacons, Concrete Plans explores themes of greed and class as a motley crew of builders become embroiled in the murder of their employer. Producer: Rob Alexander Writer/Director: Will Jewell Award: £8,250

A woman seeks refuge from her abusive husband in the Greenham Common Women’s peace camp – a movement that began in a South Wales Valley.

A slow-burning thriller revolving around a quietly damaged artist, who gradually seeks revenge against his childhood tormentors.

An inspiring drama looking at one of Wales’ greatest sons, Richard Burton, through the lens of his relationship to the man who would shape the actor’s persona and career – his childhood teacher.

Family animation telling the story of Charlie, a normal 12-year-old with a very abnormal family of ghouls.

Based on the best-selling novel by Welsh writer Belinda Bauer, this horror film follows an anatomy student drawn into a dark and dangerous world when she suspects that the cadaver she is working on was the victim of a serial killer.

Perfect student Faye takes acid, believes she is chosen by God, and starts a cult with terrifying consequences in this high-school thriller.

LEARN WITH FILM Our new film education resources are now available for free download from www.ffilmcymruwales.com

These, along with all the resources on our new education database, are perfect for film and media teachers and students alike. @FfilmEducation

OUT NOW ON D V D & B L U - R AY Writer Celyn Jones stars as legendary Welsh poet Dylan Thomas alongside Elijah Wood in Set Fire to the Stars, now available to own on DVD and Blu-Ray. Buy your copy direct from 4DVD at www.channel4store.co.uk