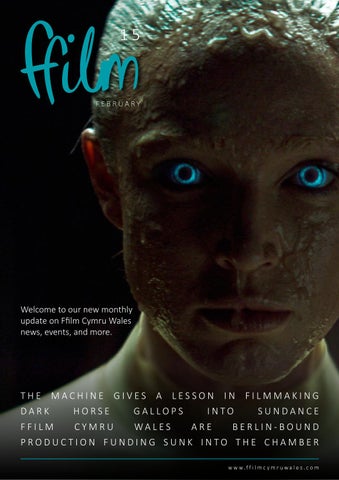 THE MACHINE GIVES A LESSON IN FILMMAKING DARK

Louise Osmondâ&#x20AC;&#x2122;s inspiring feature documentary Dark Horse will be released in UK cinemas this April following its premiere at Sundance. Combining intimate archive with dramatic re-enactments, Dark Horse tells the epic tale of a race horse whose tumultuous life journey became a symbol of hope for the Welsh syndicate who invested their last dime, and their hearts, in him. Directed by Louise Osmond and produced by Judith Dawson, Dark Horse was co-funded by Ffilm Cymru Wales, Film4 and the BFI, and won the Audience Award for Best World Cinema Documentary. The film will be released in the UK on 17th April by Picturehouse Cinemas.

COMING SOON Welsh-language horror film wraps shoot. Welsh production company Severn Screen hope to capitalise on the crossover appeal of Let the Right One In and The Orphanage with Welshlanguage psychological horror Stanley. The film tells the story of the titular character’s haunted life in a remote valley as it collides with that of a young couple seeking escape. Directed by Gareth Bryn and produced by Kate Crowther (Bypass, Waterloo Road), Stanley has just wrapped principal photography in North Wales. Writer-producer Ed Talfan (Hinterland/Y Gwyll) comments that “With Stanley, I believe we have an opportunity to make a film that resonates with audiences in Wales and beyond; a ghost story, grown out of the landscape and language of Wales.” Stanley was co-financed by Ffilm Cymru Wales and S4C, and is due to haunt screens later this year.

The Chamber is a taut and claustrophobic thriller that sees a three-man US military unit commandeer an Environmental Researcher’s submarine in order to salvage a downed nuclear drone off the coast of North Korea. When an explosive shock wave causes the vessel to overturn at a dangerous depth, the four must find a way to defuse the drone and escape the sub. With only two dive suits available and oxygen running low, the harsh truth becomes clear: not everyone is going to reach the surface alive.

THE CHAMBER The film is the feature debut of director Ben Parker, and is produced by Paul Higgins and Jen Handorf (The Borderlands). Acting as Executive Producer and Production Designer will be Swansea’s Ed Thomas, who is renowned for his work on Doctor Who, Sherlock, and Da Vinci’s Demons.

This month, members of the Ffilm Cymru Wales production and development team were in Berlin for the 65th Berlinale. They joined almost 20,000 film and media professionals from 124 countries at one of the most important events in the international film festival calendar. With a packed meeting schedule and a Welsh flag in hand, the team, led by department head Hannah Thomas, promoted a portfolio of more than 30 features from Welsh talent, currently seeking to close finance or secure sales or distribution partners. The team also raised awareness of the pan-Wales offer, including facilities and funding via Pinewood Wales and Welsh Government.

One of the films showcased by Ffilm Cymru Wales is Under Milk Wood, starring Rhys Ifans, Charlotte Church and a host of familiar Welsh faces from film and television. Following its exclusive cinema release and prime-time broadcast on S4C at Christmas, the Welsh-language Dan Y Wenallt will take on a new life as an English-language film. At the Berlin Film Festival, Kevin Allen’s film is looking for distribution deals to bring Dylan Thomas’ classic text to a new, worldwide audience. Protagonist built on international interest in Dark Horse following its premiere at Sundance. The feature documentary, co-financed by the BFI and Channel 4 in association with FfCW, was sold to Sony Pictures Classics for US distribution at Berlin. Irish-Welsh horror The Canal continued its international success after its premiere at TriBeCa and strong sales at last year’s Cannes, with Jinga Films securing further distribution deals worldwide at the Berlinale. In addition to its US sales to Orchard, The Canal has now been sold to France, Scandinavia, Taiwan and Turkey.

YO U T H I N T H E FA S T L A N E Zoom International Youth Film Festival unveil their exciting, packed programme for 2015. Zoom is all about celebrating film, from learning about what goes on behind the scenes to watching world premieres of international movies. Taking place across south Wales from 23rd to 27th March 2015, Zoom are looking forward to seeing everyone again and welcoming plenty of new faces for workshops, screenings, the gala night and the Zoom Young Film Makers Awards 2015 (The ZYFAs). All screenings are free and workshops are priced at ÂŁ1 per participant, but places are limited and must be booked in advance. Zoom is now a BAFTA Cymru approved festival, and BAFTA Cymru is one of a whole range of partner organisations who will be hosting events at ZIFF 2015, aimed at encouraging young talent to enter the film, television and games industry. Zoom offers a year round programme of digital skills and education in some of the most deprived areas of Wales and the UK, culminating in the annual awards. Ffilm Cymru has supported Zoom Cymru since its inception, including providing a company support grant to support its wider inclusion aims.

You can view the ZIFF 2015 programme at www.zoomcymru.com

EXPLORING THE UK FILM INDUSTRY ‘The Machine: Exploring the UK Film Industry’ is an AS/A-Level Film & Media Teaching Resource that explores the creation of Red and Black Films’ sci-fi indie, alongside case studies on Gravity and Edgar Wright’s sci-fi comedy The World’s End, starring Simon Pegg and Nick Frost. Curriculum specific, the resource covers development, production, post-production, and the innovative new distribution and marketing models the film employed, this interactive digital resource and DVD is designed to give film students an in-depth experience of the filmmaking process, from script to screen. Written and directed by Welsh filmmaker Caradog James, The Machine was shot almost entirely in South Wales and premiered at New York’s prestigious Tribeca Film Festival. The sci-fi action thriller then went on to win the Raindance award for Best British Film, multiple BAFTA Cymru awards, and the Screen Award for Home Entertainment Campaign of the Year. Follow @FfilmEducation, our dedicated Twitter account, for film education news, events and resources – perfect for film teachers, students, community-based learners, media teachers and students alike. The Ffilm Cymru Wales resource is produced in partnership with the qualification body WJEC, and is available to download from www.wjec.co.uk

100 pupils from Woodlands High School attended an Iris Prize Mini Film Festival on Wednesday 14th January to watch a selection of LGBT short films. The programme was selected by a small group of pupils as part of the Iris Prize Education Project, supported by Ffilm Cymru Wales and YouTube. The main attraction was the premiere of I Was Like You Too, a short film, made by the pupils themselves, tackling homophobic bullying. The pupils also took part in a question and answer session following the screenings, before been presented with DVD copies of their short film.