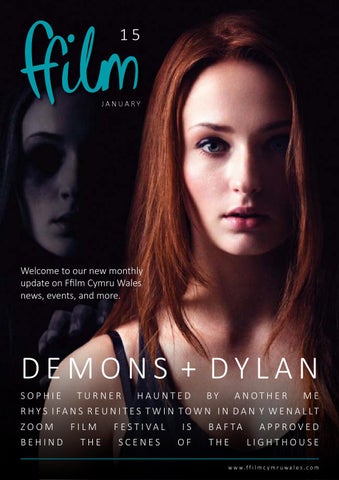 A new cinematic adaptation of legendary Welsh poet Dylan Thomasâ&#x20AC;&#x2122; classic radio play premiered at Christmas, and continues to screen in Welsh cinemas in the new year. The radically surreal and erotic Welsh-language film reunites director Kevin Allen with Rhys Ifans over 15 years after the release of their cult classic Twin Town. An ensemble cast of familiar Welsh faces is led by Ifans as First Voice and Captain Cat, alongside Charlotte Church as Polly Garter. Shot back-to-back with Dan Y Wenallt, an English-language version, Under Milk Wood, will be released in UK cinemas in Spring 2015. For more info, visit www.undermilkwoodthefilm.co.uk

Writer Celyn Jones stars as legendary Welsh poet Dylan Thomas alongside Elijah Wood in Set Fire to the Stars. Chronicling Thomasâ&#x20AC;&#x2122; hell-raising tour of America, the film turned a snowy Swansea into 50s New York and premiered at this yearâ&#x20AC;&#x2122;s Edinburgh International Film Festival. Set Fire to the Stars is in cinemas now; find a screening near you at www.munrofilms.co.uk

A man who suspects his wife is cheating on him believes their house is haunted by an evil presence urging him to take a terrible revenge in this Irish-Welsh horror from Ivan Kavanagh. The Canal stars Rupert Evans (Hellboy), Antonia-Campbell Hughes (Kelly + Victor) and Sightseers’ Steve Oram. Co-produced by Wales’ Vaughan Sivell, The Canal premiered at the Tribeca Film Festival, and was selected for the Galway Film Fleadh and Film4 FrightFest. The film also screened at last year’s Abertoir Horror Festival. The Canal will haunt UK cinemas in 2015, but in the meantime, you can watch the trailer at www.ffilmcymruwales.com

The first trailer for Isabel Coixet’s psychological thriller Another Me is now available to watch online. Game of Thrones’ Sophie Turner stars as a beautiful young girl who is haunted by a secret past in this cinematic adaptation of Kathy McPhail’s YA novel. Produced by Raindy Day Films, and predominantly shot in South Wales, the film also stars Rhys Ifans, Claire Forlani and Jonathan Rhys-Meyers. Watch the trailer at www.ffilmcymruwales.com

FFILM CYMRU WALES PUBLISHES ANNUAL REPORT This has been a huge year of transformation for Ffilm Cymru Wales as we adapt to the ever increasing pace of change from on-going shifts to how audiences watch film and engage in creativity, to the ever pressing need to stimulate jobs growth and regeneration in Wales, where the creative industries and education have clear roles to play. This report details Ffilm Cymru Walesâ&#x20AC;&#x2122; activity within the film sector and broader cultural and creative environment throughout 2013-14. This is merely a snapshot of what we have been doing at Ffilm Cymru Wales to continue our broad mission to continue to grow and support a sustainable film sector for Wales and a broad film culture with all its benefits for the people of Wales. Read our Annual Report for 2013-14 at www.ffilmcymruwales.com

Ffilm Cymru Wales announces five appointments to its Board of Directors, who will help develop the organisationâ&#x20AC;&#x2122;s commitment to talent development, the skills and regeneration benefits of film education, digital enterprise and community engagement.

In addition to the re-appointment of Will Machin, Partner and CEO of International sales agency Metro Films International, Ffilm Cymru Wales have appointed experts in a diverse range of fields. For more details on our new Board members, please visit www.ffilmcymruwales.com

THE LIGHTHOUSE Kat tells us about her experience on the set of Chris Crow’s Cinematic project The erratic convulsions of a flickering candle flame, the wind clawing at anything who dare defy its presence. And then the rain comes, softly at first, then all at once, enough to drown a man standing. They say there’s a storm coming. They say it’s the biggest you’ve ever seen, look there on the horizon... its green. Green? In fact, producer David Lloyd assures me “it’s the largest green screen in wales” and it is where chaos will rain. To say Chris Crow’s The Lighthouse is ambitious is an understatement. Selected as part of the Cinematic scheme to create a low budget feature film for £300,000 and you start to wonder if Chris has been drinking too much salt water, after all how do you recreate one the most violent storms to wreak havoc on Wales in the 1700’s in a warehouse? Yet here I stand with a constricted chest in the claustrophobic set and purpose built lighthouse which conveys the harrowing tale of The Smalls Lighthouse and its two inhabitants trapped by the elements. With an impressive penchant for creating striking CGI, Chris Crow’s attention to visual detail is phenomenal. This in turn has an unsettling psychological effect, my survival instincts prickle as the characters plight in this true life tale dawns on me. There’s a storm a’coming. You have been warned.

T H I R D S T A R SC R EENPL A Y PU B LISHED A S LIMI T ED EDI T ION B OOK The script for cult hit Third Star is now available for you to own. Published by Ffilm Cymru Wales, the script book also features exclusive behind the scenes photos, production blogs and an interview with writer Vaughan Sivell. The 2010 film starring Benedict Cumberbatch, Tom Burke and JJ Feild is a disarmingly charming tale of brotherhood and true friendship in the face of tragedy. Get your copy from www.ffilmcymruwales.com

Check out this ace work of fan art for The Machine, by Lord Mesa. Caradog James’ sci-fi thriller stars Caity Lotz as the beautiful but deadly android created by Toby Stephens’ flawed genius. The Machine is available to buy now on DVD, Blu-ray and VOD.