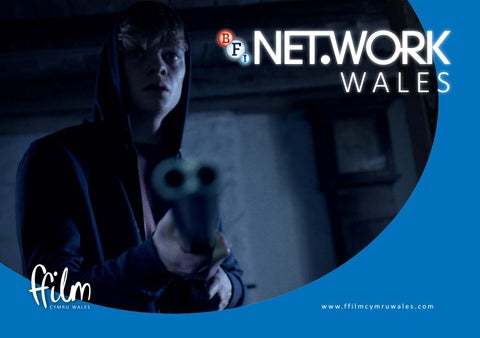 WALES The BFI NET.WORK is a UK-wide talent development programme for new and emerging film writers, directors and producers. Devised by the BFI and delivered by its national partners Ffilm Cymru Wales, Creative England, Creative Scotland and Northern Ireland Screen â&#x20AC;&#x201C; the BFI NET.WORK is committed to discovering the next generation of British filmmaking talent. network.bfi.org.uk

The Horizons Fund offers tailored support to circa 6-10 individuals and feature film projects per year of up to £6,000 per award. Whether you are seeking a mentor to help further your professional career or project specific aid, The Horizons Fund can help.

Documentary following Godfather of Electronic Music, Gary Numan, as he moves to LA and returns to the studio for the first time in almost a decade.

HIGH TIDE A mother and son go on a journey of selfdiscovery and confession along the Welsh Coastline.

I AM NOT A WITCH After being exiled to a Witch Camp, a Zambian girl must decide whether to stay within the confines of the camp and live as a witch, or make a break for freedom and risk the consequences of dark magic.

Set in Oaklands California, this documentary follows a group of young black men trying to survive the gun culture, poverty and unemployment of their area, looking for a way out by developing their music and hoping for a better future.

A middle-aged loner records and catalogues the sounds of nature on the Gower estuary. But as those around him raise concern about his mental health, they find a dark past still haunts him.

DONNA Following 70 year old trans performer Donna on a journey to perform in Las Vegas and reconnect with family who know her as Gustavo and have yet to meet her in her new identity.

ECHOES Set in the untamed frontier world of the early Canadian Prairie settlers, Echoes is the story of two women - a Welsh immigrant farmer and a First Nation Ojibwe - who loved the same man. Their passage through love, hardship and tragedy leads to reconciliation, hope and new beginnings.

G L A S LY N Upon moving to North Wales with her husband and disabled daughter, an exhausted young mother comes to believe she is sharing her new home with a restless spirit intent on harming her family.

Joe and Katie fake a relationship on Facebook to get back at their ex partners and find their romance blossoms for real.

LOVE2 Scientist Alice is socially awkward when it comes to dating but a genius when it comes to her work. She creates a duplicate of herself resulting in the birth of the scientific discovery of the century and the death of her love life.

Following a mental breakdown, 21‐year‐old Ann returns to stay with her sister and mother on holiday in Maine. When Ann’s father turns up unexpectedly it triggers memories and she becomes fearful for her younger sister. But are her memories real or a product of mental illness?

N E C K FA C E Female driven comedy about every bridezilla’s worst nightmare: waking up with a spot. But not just any spot, a talking spot hell bent on bringing the big day down.

Producer Angharad Elen – working with producer mentor Hilary Bevan Jones: The Boat That Rocked (2009), The Girl in the Café (2005) and To the Ends of the Earth (2005). Angharad is Associate Producer on FfCW-supported feature The Dark Outside, which is produced by Hilary Bevan Jones.

Through short film scheme Beacons, we

IN THIS HOUSE An elderly couple live out their strange and beautiful existence together in a relationship where not everything is as it seems.

Since Dylanâ&#x20AC;&#x2122;s mother passed away his nightmares have been becoming real, more violent and seeping into his waking hours. But how do you escape yourself?

PINK SUEDE SHOES Jasun Watkins brings his pink, brash and very camp Elvis impersonation act to the biggest Elvis tribute festival in Europe. We join him in the days leading up to the competition, as he recalls how his troubled family life and childhood suffering fed his desire for fame. Will Pink Elvis win over the residents of this small Welsh seaside town?

A young Zambian girl, Shula, is exiled to a witch camp and must earn her keep by identifying a thief at a local factory. Will it be guesswork or magic that comes to her rescue?

THE TRUTHFUL PHONE Based on Terry Jonesâ&#x20AC;&#x2122; short story, The Truthful Phone is a dark comedy about nasty pensioner Mae Morris - local busybody, pet kidnapper and husband killer - who unwittingly unleashes a magical gypsy curse exposing her secrets to the very townsfolk she has been tormenting.

THE VIDEO MAN Through faded memories and home movie footage Emily gradually pieces together the story of her late fatherâ&#x20AC;&#x2122;s demise, a journey that compels her to confront and exorcise the most painful memory of all.

T H I N G S T H AT FA L L F R O M T H E S K Y A story about collisions - between a swan and a power line, and between a muddy man in a ditch and a woman with blood on her hands.

Centred around John, a man in his 70s living on a remote farmhouse, This Far Up is a surrealist exploration of life, death and what lies in between.

ZERO SUM In the near silence of space, Ruth wakes up. As she slowly comes to life, she looks out of the window to see that her ship is one of hundreds orbiting an alien planet.

A black comedy about Brendan, a toll booth operator in the middle of nowhere with a disdain for conversation, a mild lactose intolerance and an interest in the genre of the academic novel. Why do all his customers keep trying to change him?

BEDDGELERT Based on the Welsh legend, Beddgelert tells the story of Llewelyn, a prince grieving for his dead wife. He seeks solitude in a remote hunting lodge, taking with him his newborn son and his most trusted hound, Gelert. But despite Gelertâ&#x20AC;&#x2122;s companionship, Llewelyn is blinded by grief, and he fails to see the new danger that threatens his family.

C R E E P Y PA S TA S A L A D A werewolf with an anxiety disorder, a ghost with low self-confidence and a lonely witch muddle through their everyday lives in this apocalyptic animation.

EGG SOLDIER As a boy in an isolated farmhouse tries to survive his crazed father, he yearns for the return of his mother to protect him - but instead slowly discovers his fatherâ&#x20AC;&#x2122;s grim past.

A dinner party turns awkward when one guest arrives with the taxidermied body of her recently deceased husband.

SUNSPOTS In this delightful stop-motion comedy of megalithic proportions, travel through the mysterious mists of time and join three wise old druids on a quest to restore the balance of their world after an inexplicable catastrophe.

An anonymous man in a mac is walking through rush hour of a city. Unbeknownst to anyone he is wearing a suicide vest. While determinedly walking through the crowds, he is disturbed by unexpected glimpses of humanity. Away from the crowd he breaks down. Can he complete his mission?

STRAEON IRIS A new Welsh language LGBT short film scheme in conjunction with the Iris Prize Festival, supported by S4C and Ffilm Cymru Wales via BFI NET.WORK. Straeon Iris aims to encourage more LGBT stories for the screen, from Wales, about Wales, and in Welsh.

AFIACH A cow, a bed and a strange Station Master surround a woman waiting on a railway platform for a train to take her far away, perhaps to India? Her wife pleads for her to remain for these last days of her life. The train is coming - but is it hers and will she step on board or stay a while longer?

Welsh National Opera, The Space & BFI NET.WORK Wales supported three Welsh filmmakers to collaborate with composers responding to events in the news for their OCCUPATION season.

BLACK CHRISTMAS Ewan Jones Morris collaborated with High Contrast. Black Christmas is a satirical take on the commerciality of Christmas in our modern age. With a very gruesome present.

Cyrus Mirza Shafa collaborated with Cerys Matthews. In response to the deaths of Michael Brown and Eric Garner in America, ‘I Can’t Breathe’ is a moving cover of the well-known spiritual, ‘Nobody Knows The Trouble I’ve Seen.’

T H E S L E E P I N G M AT Margaret Constantas collaborated with Judith Weir. Following the Hong Kong protests, this piece responds to the students camping in the middle of a motorway, their idealism and frail beauty of their living spaces including the woven mats they had to sleep on.

This intensive training event offered emerging female directors mentoring, masterclasses and the opportunity to rehearse, shoot and edit scenes from their developing feature projects with a professional cast and crew.

This event was targeted specifically at Black, Asian and Minority Ethnic talent with the aim of championing under represented voices and stories from Wales.

Featuring a host of talks and masterclasses to equip aspiring filmmakers in Wales with the tools to progress their careers, this event coverered how to progress short films and web series to the cinema, telling stories for an international audience, as well as making and marketing films in the Welsh language.

We have hosted a number of script readings and talent showcases for BFI NET.WORK and Ffilm Cymru Wales projects, including Y Llyfrgell / The Library Suicides, Perish, Joe & Katie are in a Relationship, Dear Norman Mailer, Mae Gen I Gariad and Maldod.

• Explore new ideas to maximise the value of film.

• Engage with the educational and

economic benefits that film brings to the rich culture of Wales.

Through funding and professional advice, we