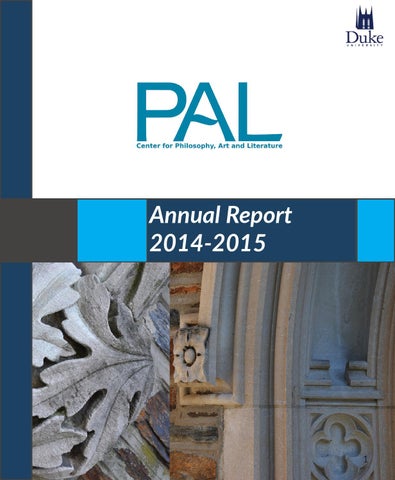 James B. Duke Professor of Literature and Romance Studies

Years of PAL at Duke

PAL seeks to make a strong interdisciplinary contribution to the humanities at Duke. In 2014-15 we worked particularly hard to support the writing lives of our graduate students. With the help of Heather Gates (History) we co-ordinated and sponsored writing groups for over 50 graduate students. We ran a monthly series of workshops on writing. In spring, our writing events culminated in PAL’s third “Writing Is Thinking” Workshop, headlined by Verlyn Klinkenborg. PAL organized a reading group on Hannah Arendt. A panel of graduate students responded to Mark Greif’s presentation of his book The Age of the Crisis of Man. We sponsored talks by our young international visitors, Salla Peltonen and Corina Stan, with responses by Duke graduate students. PAL’s Graduate Certificate continues to attract students from across the humanities. PAL also launched a new series on intellectual women. In the fall we had a symposium on on Mme du Châtelet and Mary Wollstonecraft; in spring one on Hannah Arendt.

As usual, we sponsored lectures in In 2014-15 we welcomed the first philosophy and the arts: The distintwo PAL/FHI Seminars on “Concepts, guished art historian Keith Moxey Figures, Art Forms,” sponsored by the shared his thoughts on time and art, Mellon Foundation: Bruce Matthews (one of Duke’s Hu- • Whose Kafka? led by Saskia Zimanities Writ Large olkowski and Kata Gellen. “PAL seeks to make a fellows) presented • The Novel, led by Nancy strong interdisciplinary Schelling’s vision of Armstrong and Erdag the University, and contribution to the hu- Goknar. the renowned literary manities at Duke” In 2015-16 we will concritic Derek Attridge tinue the “Intellectual discussed literature Women” series, sponsor in history. We ended the year with more writing-focused events, and, a symposium on the philosopher J. not least, host PAL’s fourth Young L. Austin with Sandra Laugier (SorScholars Workshop on literature, ethbonne), Estelle Ferrarèse (Strasics, and philosophy, with Niklas Forsbourg), and Sarah Beckwith (Duke). berg (Uppsala) and Nora Hämäläinen On the invitation of then Dean Laurie (Helsinki). Patton, PAL set up a working group I hope to see many of you at our on Humanities education for underevents this year! graduates, and sponsored a symposium on teaching in the humanities October 2015 today, with Paula Findlen (Stanford), Toril Moi Sean Kelly (Harvard), and James Director of PAL Simpson (Harvard).

Moxey is Barbara Novak Professor of Art History at Barnard College and Columbia University. He is the author of Visual Time: The Image in History (2013). November 13

Matthews was a 2014-2015 Humanities Writ Large Visiting Fellow at Duke. He discussed the fragmentation and specialization of the disciplines within the university.

A Lecture by Derek Attridge

Attridge presented a section of his forthcoming book, “The Work of Literature.” Attridge teaches at the University of York and is a Fellow of the British Academy.

PAL was invited by Dean Laurie Patton to be the home for a conversation with Duke Humanities Faculty on undergraduate curriculum and the humanities. PAL hosted a symposium and faculty discussion with experts from other institutions that run special liberal arts programs. A committee of faculty members are working on a proposal for an intensive liberal arts program for Duke undergraduates.

At PAL’s first party of the year, we introduced the PAL Writing Groups and the PAL Certificate to the graduate student community. We served signature cocktails and hors d’oeuvres at this fun bash. Running from Fall 2014 to Spring 2015

Reading Group on Hannah Arendt A community of graduate students and faculty read and discussed from The Portable Hannah Arendt, The Human Condition, and other Arendt texts

PAL strives to provide a relaxed yet intellectually exciting atmosphere, in which graduate students are invited to come together across disciplinary boundaries to explore questions of common interest. You donâ&#x20AC;&#x2122;t have to be committed to any of PALâ&#x20AC;&#x2122;s core fields to find PAL a welcoming space. PAL encourages graduate students to come together to read and write, and to discuss works of intellectual interest in many disciplines.

The PAL Graduate Certificate seeks to connect the study of specific works of art and specific art forms (e.g., literature, music, theater, painting, film) to questions concerning creativity, the nature of specific art forms, the relationship between knowledge and art, and between ethics and aesthetics. The Certificate aims to make students conversant with philosophical reflections on literature and the arts. The Certificate seeks to foster an understanding of the historical nature of different art forms, and of aesthetics and philosophy, and to encourage exploration of philosophy, art and literature from different historical periods. The Certificate is designed to provide students with a firm grounding in the research skills required to enable them to intervene in contemporary debates within the field and to encourage them to consider their own field of study from an inter- or cross-disciplinary approach. For more information 12

James B. Duke Professor of Literature and Romance Studies; Professor of Philosophy, English and Theater studies

Verlyn Klinkenborg Verlyn Klinkenborg was Writing is Thinking’s 2015 keynote speaker. Klinkenborg is the author of Several Short Sentences About Writing (2012), and More Scenes From the Rural Life (2013). He is the recipient of a 2007 Guggenheim Fellowship and was a member of the New York Times editorial board from 1997 to 2013. He teaches at Yale University. Mr. Klinkenborg lives in rural New York state. During his visit to PAL, Klinkenborg met individually with participants in PAL Writing Groups and made two presentations: March 19

The Writer at Work March 20

The Language of Place Supported by

Graduate students read Klinkenborg’s book “Several Short Sentences on Writing” (graciously provided by the Thompson Writing Program) in the semester prior to his visit. 15

PAL Forums Reflections on the Posthuman

A PAL forum with

Peltonan, PAL Visiting Scholar, presented a Wittgensteinian view on discussions of the posthuman in feminist theory.

Stan presented a paper on the concept of interpersonal distance in Barthes, Murdoch, and Orwell.

The Age of the Crisis of Man: Thought and Fiction in America, 1933-1973 Presentation by

Enlightenment Orientalism: Resisting the Rise of the Novel

A panel discussion on Srinivas Aravamudanâ&#x20AC;&#x2122;s Enlightenment Orientalism: Resisting the Rise of the Novel (University of Chicago Press, 2011). Presented by the Franklin Humanities Institute and Duke University Libraries. Co-Sponsored by English, Romance Studies, the Program in Literature, and The Center for Art, Philosophy and Literature (PAL) at Duke University.

Ivanhoe presented a chapter of his forthcoming book. He described some of the ways that Confusians thought music was critical for personal and social wellbeing.

PAL and FHI Seminars Concepts, Figures, Art, Forms The â&#x20AC;&#x153;Concepts, Figures, Art Formsâ&#x20AC;? collaboration between PAL and FHI is a central element of a new series of FHI Seminars in Historical, Global, and Emerging Humanities, a 3-year initiative generously funded by the Andrew W. Mellon Foundation concerned with the state and direction of the humanities in the light of the interdisciplinary developments of recent decades.

Whose Kafka? Multiplicity, Reception, and Interpretation

Assistant Director for PAL, 2010-2013 PAL’s sixth year began in tragedy. We still mourn the loss of PAL’s longtime assistant, Kaila Brown, who died in September 2014. This annual report is dedicated to her memory.

Kaila was luminous. She shone with passion for literature, and for ideas. She was everyone’s favorite student. I was privileged to be allowed to work with her for five years. Our hearts go out to Kaila’s friends and family. — Toril Moi Kaila Brown was a beautiful soul, illuminated by her capacious loves–for books, for thinking, for dance and theatre–and above all, for others. She was funny, quick-minded, full of wit, spunk and spark. She was a catalyst for others. I am so sad to lose her. — Sarah Beckwith Kaila carried the banner for PAL while Toril was on leave. She was a model for me in how to host a rich intellectual community through attention to detail, grace, good spirits, and passionate inquiry. She shaped us in indelible ways. — Heather Wallace