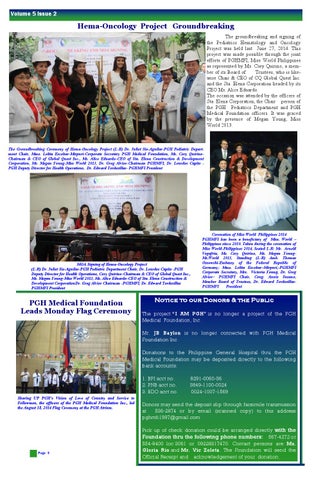 Hema-Oncology Project Groundbreaking The groundbreaking and signing of the Pediatrics Hematology and Oncology Project was held last June 27, 2014. This project was made possible through the joint efforts of PGHMFI, Miss World Philippines as represented by Ms. Cory Quirino, a member of its Board of Trustees, who is likewise Chair & CEO of CQ Global Quest Inc. and the Sta. Elena Corporation headed by its CEO Ms. Alice Eduardo. The occasion was attended by the officers of Sta. Elena Corporation, the Chair person of the PGH Pediatrics Department and PGH Medical Foundation officers. It was graced by the presence of Megan Young, Miss World 2013.

Sharing UP PGH’s Vision of Love of Country and Service to Fellowmen, the officers of the PGH Medical Foundation Inc., led the August 18, 2014 Flag Ceremony at the PGH Atrium.

Donors may send the deposit slip through facsimile transmission at 536-2874 or by email (scanned copy) to this address pghmfi1997@gmail.com. Pick up of check donation could be arranged directly with the Foundation thru the following phone numbers: 567-4272 or 554-8400 loc.3061 or 09228317470. Contact persons are: Ms. Gloria Rio and Mr. Vic Zoleta. The Foundation will send the Official Receipt and acknowledgement of your donation.