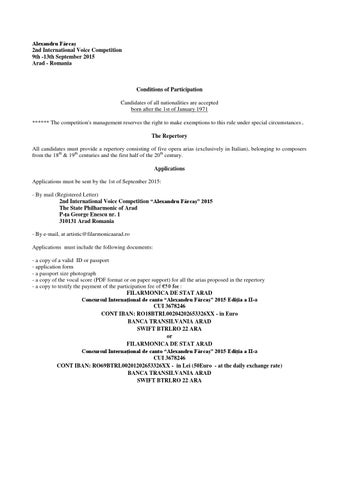 REGULATION The arias chosen are to be sung by memory and performed in the original key and language. The candidates must present the vocal scores (pdf format or on paper support), for all the five arias proposed in the repertory, attaching them to the application form.

4. Traditional cuts are accepted. 5. For the Laureates’ Concert, the jury shall choose an aria from the candidate’s repertory, depending on existing orchestral material. 6. The order of the performed arias is of the candidate`s choice. 7. The programme specified by the candidate in the application form cannot be modified later. 8. The aria chosen by the candidate for the first round cannot be more than eight minutes long. This aria will be on top of the list of the repertory in the application form. 9. Throughout the contest, the repertory chosen by the jury will be announced at the end of each round by the secretary of the contest, who will also receive the candidate’s choice (for the second round aria); schedules are made courtesy of the secretary of the competition 10. The results of the first two rounds will be displayed once each round ends. 11. Piano rehearsals will be scheduled by agreement between the official competition pianist accompanist and the candidate, depending on the number of the participants 12. Organisers will provide the pianist for all candidates. The candidates have the right to bring their own pianist at their own expense. 13. Candidates will cover their own travel costs, accommodation costs and other personal expenses throughout the contest. 14. All the rounds are open to the public. 15.Competition management reserves the right to allow radio and television companies’ partial or complete recording and broadcasting. 16. By sending the application form, candidates consent to having their performances recorded and broadcast without remuneration. 17. Organisers may name one or two substitute members of the jury, in case one or more appointed members should not be able to take part at one of the rounds of the competition. 18. Assessment will be done as follows:     

Distinctions and special awards are given according to the decisions of the jury. The jury reserves the right not to award prizes if the contestants do not fulfil the appropriate artistic requests. If one of the candidates was the student or have by any means a relationship with one of the jury members, the jury member will not rank the contestant. The jury's decision is final and any attempt to influencing it will bring as a result the disqualification of the candidate .

By completing and signing the application form, the candidate expresses his/her agreement to the present regulation.