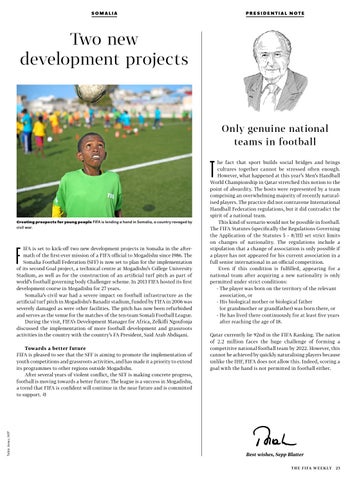 Only genuine national teams in football

T Creating prospects for young people FIFA is lending a hand in Somalia, a country ravaged by civil war.

IFA is set to kick-off two new development projects in Somalia in the aftermath of the first-ever mission of a FIFA official to Mogadishu since 1986. The Somalia Football Federation (SFF) is now set to plan for the implementation of its second Goal project, a technical centre at Mogadishu’s College University Stadium, as well as for the construction of an artificial turf pitch as part of world’s football governing body Challenger scheme. In 2013 FIFA hosted its first development course in Mogadishu for 27 years. Somalia’s civil war had a severe impact on football infrastructure as the ­a rtificial turf pitch in Mogadishu’s Banadir stadium, funded by FIFA in 2006 was severely damaged as were other facilities. The pitch has now been refurbished and serves as the venue for the matches of the ten-team Somali Football League. During the visit, FIFA’s Development Manager for Africa, Zelkifli Ngoufonja discussed the implementation of more football development and grassroots ­activities in the country with the country’s FA President, Said Arab Abdiqani.

Towards a better future FIFA is pleased to see that the SFF is aiming to promote the implementation of youth competitions and grassroots activities, and has made it a priority to extend its programmes to other regions outside Mogadishu. After several years of violent conflict, the SFF is making concrete progress, football is moving towards a better future. The league is a success in Mogadishu, a trend that FIFA is confident will continue in the near future and is committed to support. Å

he fact that sport builds social bridges and brings cultures together cannot be stressed often enough. However, what happened at this year’s Men’s Handball World Championship in Qatar stretched this notion to the point of absurdity. The hosts were represented by a team comprising an overwhelming majority of recently naturalised players. The practice did not contravene International Handball Federation regulations, but it did contradict the spirit of a national team. This kind of scenario would not be possible in football. The FIFA Statutes (specifically the Regulations Governing the Application of the Statutes 5 – 8/III) set strict limits on changes of nationality. The regulations include a stipulation that a change of association is only possible if a player has not appeared for his current association in a full senior international in an official competition. Even if this condition is fulfilled, appearing for a national team after acquiring a new nationality is only permitted under strict conditions: - The player was born on the territory of the relevant association, or - H is biological mother or biological father (or grandmother or grandfather) was born there, or - He has lived there continuously for at least five years after reaching the age of 18. Qatar currently lie 92nd in the FIFA Ranking. The nation of 2.2 million faces the huge challenge of forming a competitive national football team by 2022. However, this cannot be achieved by quickly naturalising players because unlike the IHF, FIFA does not allow this. Indeed, scoring a goal with the hand is not permitted in football either. 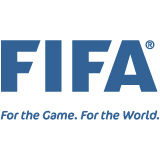