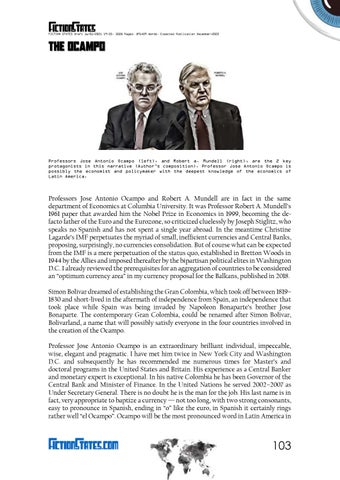 Professors Jose Antonio Ocampo and Robert A. Mundell are in fact in the same department of Economics at Columbia University. It was Professor Robert A. Mundell’s 1961 paper that awarded him the Nobel Prize in Economics in 1999, becoming the defacto father of the Euro and the Eurozone, so criticized cluelessly by Joseph Stiglitz, who speaks no Spanish and has not spent a single year abroad. In the meantime Christine Lagarde’s IMF perpetuates the myriad of small, inefficient currencies and Central Banks, proposing, surprisingly, no currencies consolidation. But of course what can be expected from the IMF is a mere perpetuation of the status quo, established in Bretton Woods in 1944 by the Allies and imposed thereafter by the bipartisan political elites in Washington D.C. I already reviewed the prerequisites for an aggregation of countries to be considered an “optimum currency area” in my currency proposal for the Balkans, published in 2018. Simon Bolivar dreamed of establishing the Gran Colombia, which took off between 1819– 1830 and short-lived in the aftermath of independence from Spain, an independence that took place while Spain was being invaded by Napoleon Bonaparte’s brother Jose Bonaparte. The contemporary Gran Colombia, could be renamed after Simon Bolivar, Bolivarland, a name that will possibly satisfy everyone in the four countries involved in the creation of the Ocampo. Professor Jose Antonio Ocampo is an extraordinary brilliant individual, impeccable, wise, elegant and pragmatic. I have met him twice in New York City and Washington D.C. and subsequently he has recommended me numerous times for Master’s and doctoral programs in the United States and Britain. His experience as a Central Banker and monetary expert is exceptional. In his native Colombia he has been Governor of the Central Bank and Minister of Finance. In the United Nations he served 2002–2007 as Under Secretary General. There is no doubt he is the man for the job. His last name is in fact, very appropriate to baptize a currency — not too long, with two strong consonants, easy to pronounce in Spanish, ending in “o” like the euro, in Spanish it certainly rings rather well “el Ocampo”. Ocampo will be the most pronounced word in Latin America in The Dawn of A New Era

The Dawn of A New Era