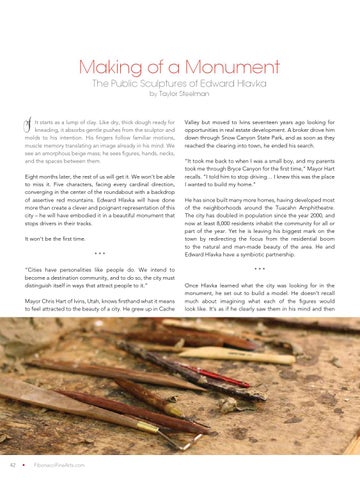 It starts as a lump of clay. Like dry, thick dough ready for kneading, it absorbs gentle pushes from the sculptor and molds to his intention. His fingers follow familiar motions, muscle memory translating an image already in his mind. We see an amorphous beige mass; he sees figures, hands, necks, and the spaces between them. Eight months later, the rest of us will get it. We won’t be able to miss it. Five characters, facing every cardinal direction, converging in the center of the roundabout with a backdrop of assertive red mountains. Edward Hlavka will have done more than create a clever and poignant representation of this city – he will have embodied it in a beautiful monument that stops drivers in their tracks. It won’t be the first time. ***

“Cities have personalities like people do. We intend to become a destination community, and to do so, the city must distinguish itself in ways that attract people to it.” Mayor Chris Hart of Ivins, Utah, knows firsthand what it means to feel attracted to the beauty of a city. He grew up in Cache

Valley but moved to Ivins seventeen years ago looking for opportunities in real estate development. A broker drove him down through Snow Canyon State Park, and as soon as they reached the clearing into town, he ended his search. “It took me back to when I was a small boy, and my parents took me through Bryce Canyon for the first time,” Mayor Hart recalls. “I told him to stop driving… I knew this was the place I wanted to build my home.” He has since built many more homes, having developed most of the neighborhoods around the Tuacahn Amphitheatre. The city has doubled in population since the year 2000, and now at least 8,000 residents inhabit the community for all or part of the year. Yet he is leaving his biggest mark on the town by redirecting the focus from the residential boom to the natural and man-made beauty of the area. He and Edward Hlavka have a symbiotic partnership. *** Once Hlavka learned what the city was looking for in the monument, he set out to build a model. He doesn’t recall much about imagining what each of the figures would look like. It’s as if he clearly saw them in his mind and then 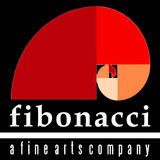