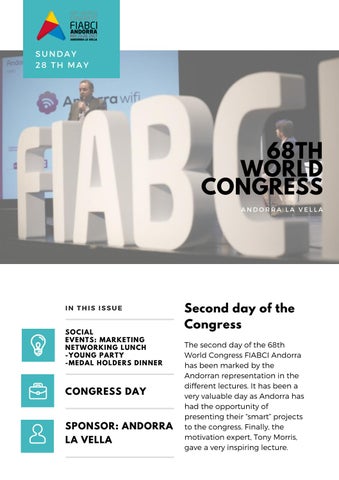 Second day of the Congress The second day of the 68th World Congress FIABCI Andorra has been marked by the Andorran representation in the different lectures. It has been a very valuable day as Andorra has had the opportunity of presenting their “smart” projects to the congress. Finally, the motivation expert, Tony Morris, gave a very inspiring lecture.

The marketing networking lunch was celebrated in the Centre de Congressos in Andorra la Vella. It was a great opportunity for participants to network amongst themselves by presenting their own projects and by exchange business cards. The objective was to promote interaction and social relationships amongst the different attendees.

YOUNG MEMBERS PARTY It is the most highlighted event as members have the opportunity of relaxing and getting to know the other participants in a more casual way. The Young memberâ&amp;#x20AC;&amp;#x2122;s party is directed to new young FIABCI representatives. It has been celebrated in the Borda Pairal in Andorra. This location consists in a cosy traditional Andorran restaurant.

MEDAL HOLDERS DINNER FARGA ROSSELL This event was exclusive for FIABCI members and partners. This dinner was in honour of the FIABCI members awarding the services they rendered. The event took place in Farga Rossell in la Massana. La Farga Rossell consists in an old forge reconstructed as an interpretation centre. The centre reveals the mining extraction and the elaboration from the mineral stone to metal.

CONGRESS DAYS CONGRESS DAYS &quot;The second day has been focused on communication, digital channels, marketing and social networks. Saturday was another valuable day. The Congress started with Luis Alonso’s lecture: “Functional Promiscuity: a necessity&quot; where he explained the meaning of functional promiscuity in the private and public sector. This fact offers great opportunities to unite the different initiatives and complement them with a range of objectives. This results in finding an authentic social, economy and energetic sustainability. Furthermore, John Mayfield and his lecture called “Living in the cloud” overviewed social networks and their use in the real estate sector.

The Italian Marco Maria Pedrazzo spoke about how Internet surrounds each aspect of our life and how it has become the Internet of Things. As a result, this effects our daily lifestyle by becoming the way we eat and the way we buy different products for instance. Data and new technologies could change the world of retail, stimulating new and better informed consumption pattern, as experimented inside the Future Food District. Andorra has had an important role during the day. The Andorran participation started with the The Cloud building presentation with Jordi Nadal and Gerard Arias. Both of them explained how The Cloud building project is the head leader of an intelligent and sustainable construction, one of the main key points of the 68th FIABCI congress.

Albert Moles is the director of FEDA, the most important energetic company of Andorra. He spoke about the role the company has in the country and about the new energetic models that are being implemented to promote new products. He also described electric mobility and how Andorra is the head leading country of this product. Finally, Conrad Blanch, managing director of ENSISA Grandvalira (the biggest ski resort in South of Europe) explained how Andorra optimizes Vallnord and Granvalira’s skiing resources. Tony Morris, a well-known motivator, concluded today’s event with a high expectation lecture.

INTERVIEW CONRAD BLANCH During his lecture, Mr. Blanch explained how ski resorts apply technology and the business model that determines ENSISA Grandvalira. In Andorra, the model used in business corresponds to the intermediate one as the product is created and then it is studied how it will be sold to the client.Â Andorra is an icon for skiing resorts in Europe and in the world. Our visitors have the guarantee of having 300 km to ski, good snow and the slopes properly equipped. The extra information about Andorra is also essential. Technological advances, such as automation of the snow canyons, GPS installation in the snow grooming machines are applied in skiing resorts. Moreover, fibre optic connection, Wifi and apps such as Alpify complement this technological display. An important fact is the amount of residue found, the separation of contamining residues, recycling and the importance of respecting nature.

INTERVIEW TONY MORRIS Tony Morris was able to stir up expectations during his lecture. Through real life situations real estate agents have, he was able to expose solutions and ways of acting to become more productive, imaginative and better professionals. To achieve this, he stated that the importance is to care for details. Amongst other advices, he declared the importance recommendations have in business. Mr. Morris concluded his speech with a very clear message: Be excellent means to be remembered, to be unique. If you don’t stand out, you do not have the right to earn more. If you don’t stand out, you will not be remembered; if you don’t stand out, you will lose your business.

SOCIAL EVENTS CULTURAL ROUTE The Basilica Sanctuary of Nostra Senyora de Meritxell, recently recognised by the Pope as a minor basilica, stands in Meritxell. The ancient Romanesque Meritxell sanctuary, restored and modified in the 17th-century, was destroyed by fire in 1972. The present temple erected alongside the ancient hermitage is the work of prestigious Catalan architect Ricard Bofill, who conceived it as a “Romanesque recreation”. Inside there is a reproduction of the Romanesque Nostra Senyora de Meritxell and also the sculptures of the seven patron saints of the Andorran parishes.

Casa de la Vall: Situated in the centre of Andorra la Vella, the Casa de la Vall is a central point worth visiting in order to understand the remarkable history and solid institutional basis of the Principality of Andorra. It is a noble building dating from the late 16th century. In 1702 it became the seat of one of the oldest and most continuous parliaments in Europe, the “Consell General”, first created in 1419.

In Andorra la Vella you will find from prehistoric engravings to contemporary music, theatre and art performances. Some of the best examples of the andorran romanesque art are situated in Andorra la Vella. All the popular celebrations and traditions of Andorra la Vella will make you discover the roots of our culture. The andorran gastronomy is based on the most traditional mountainstyle cuisine, as well as on the most innovative tendencies. Andorra is also a vital, expanding cultural community. A proof of it are the plays and productions with world-famous names, and a series of other world-recognised events such as Le Cirque du Soleil.

SPONSOR COMĂ&amp;#x161; D&#39;ANDORRA LA VELLA Set in the central valley of the River Valira, in the heart of the country, Andorra la Vella is the ancestral capital of the Valleys. In the middle ages this was where the representatives of the six historic parishes of Andorra would meet together, in the Consell de la Terra, the countryâ&amp;#x20AC;&amp;#x2122;s earliest parliament. Today it is the nevralgic centre of the country, the political, cultural and commercial capital of Andorra. Andorra la Vella is the commercial capital of the Pyrenees. Its streets and avenues form an immense open shopping area, where you can find the most exclusive articles, the latest world novelties and the must surprising specialities, at prices without competition. The shops in Andorra la Vella are waiting to welcome you with an enormous variety of products.