MONSTERS OF ART– 20 Years of Havoc

ON THEON RUN THEBOOKS RUN BOOKS togethertogether form anform encyclopedia an encyclopedia that catalogs that catalogs graffiti graffiti and urban andart urban fromart around from the around world. theSince world.1990, Sincethe 1990, OTRthe team OTR has team builthas an built an ever-growing ever-growing archive, archive, eventually eventually to be donated to be donated to the Museum to the Museum of UrbanofArt, Urban a Art, a

project presently project presently under development under development as part of as the partCampus of the Campus of UrbanofCulture, Urban Culture, which focuses which focuses on Hip Hop on Hip andHop graffiti andculture. graffiti culture. With every Withtitle, every we title, digitize we and digitize and public. All public. this, All andthis, in keeping and in keeping with ourwith motto: ourKNOW motto:YOUR KNOWHISTORY. YOUR HISTORY.

mostmost notorious notorious train train crew,crew, Monsters Monsters Of Of EuropE’s EuropE’s Art, celebrates Art, celebrates 20 years 20 years of train of havoc. train havoc. It is with It is great with great pleasure pleasure that we thathonor we honor their their anniversary anniversary with awith mona monster edition ster edition of ONofTHE ON THE RUN.RUN. Join us Joinforusa for rarea and rare and privileged privileged glimpse glimpse into the into unruly the unruly worldworld of MOAS. of MOAS. With With over over 200 pages 200 pages that detail that detail MOAS’s MOAS’s history history and and unique unique crew crew concept, concept, alongalong with classic with classic tales tales from from the train the train yard,yard, including including greatgreat escapes, escapes, writerwriter beef,beef, legendary legendary busts,busts, extreme extreme graffiti graffiti feats,feats, trains, trains, trainstrains and more and more trains. trains. This This is a must-have is a must-have for allfordiehard all diehard fans of fans train of train graffiti. graffiti. MOAS MOAS blasted blasted onto onto the Copenhagen the Copenhagen scenescene in in 1991.1991. OnceOnce they they had Denmark had Denmark locked locked down,down, MOAS MOAS expanded expanded through through a series a series of high of high profile, profile, internainternationaltional affiliations affiliations to become to become omnipresent omnipresent in Denmark, in Denmark, Europe Europe and now and now the world. the world. TheirTheir infamous infamous working working methods methods have have become become the standard the standard for those for those daring daring to compete. to compete. ManyMany have have attempted, attempted, but most but most fail. For fail. For thosethose willingwilling to try,tobe try,warned, be warned, they they are ruthless are ruthless in- inside and sideoutside and outside the yard, the yard, so proceed so proceed with caution. with caution. MOAS—20 MOAS—20 yearsyears on the on run the and run and still going still going strong. strong. Don’tDon’t listenlisten to thetorumors; the rumors; get the getstory the story directdirect from from the source. the source.

problem for sure. We would go over everything of theirs and if we met those guys, we would also go over them. MINS

SWITZERLAND—TKO Transit Knock Out is a crew from Basel. The crew was founded in 1993. Its members are Remo (RIP brother—we miss you so hard), Mr.Maks, Sice and Crone. Because we lived outside of town, we always had tracks and trains around us and it’s a nice thing to get on a train that’s been bombed by yourself or your crew members. MOA is a big part of writer history. Ever since we were into trains, the name MOA turned up in magazines and books. You really couldn’t miss it. We saw it everywhere. Around 2000 Remo and Mr.Maks traveled to Copenhagen several times and got to know the MOA boys. The contact has existed since then and our crews became good friends. The towns of Basel and Copenhagen belong together. MOA is not just a crew; it’s a way of life that goes way beyond writing. It’s more fun to go out with friends and write a crew name. A MOA mission is big, hard and fast. We write all the crew names of the people we know. That’s MOA, TKO, VIM and ALL. Even though we are divided by distance, this bond we share keeps us together, no matter how long it’s been since we’ve seen certain members of the crew. Love to all of our MOA brothers. Thanks for all the good moments we’ve had together!

was about the Swiss way. They don’t do violence, they’re artists. MOAS

Train bombing is MOA and MOA is train bombing! They are the magic letters! And by the way, this letter combination writes so easy that it has to get hit up on steel. TKO

Mr.Maks: It just took me a couple of hours to figure out that nobody else I have met on my graffiti travels deserves the name ‘Monsters’ as much as the guys from CPH. Since we became friends and I got to know the human side of these train-eating monsters, I call them ‘Olsens’, just like the guys from the Danish crime comedy ‘The Olsen Gang’. This comedy from the 80s is about three Danish crooks who are more likable and gentler than gangsters. However, every episode starts with Egon Olsen getting released from prison and a second later they are working on the next super coup to get rich on, at which they never succeed, and at the end of every movie, Egon Olsen goes back to jail for their failed coup. 52

a professional train painting company or association, “it’sMOAS—it’s where people who love the same thing come together and it kind of evolved to a new, different level. ” LEs

the DSB and cops were glad “thatOfIcourse was away, but the other rats, they were dancing, thinking now MOAS is weak, we can move on in. Mins

at this time to split up and do multiple missions in one hit. Groups spread out across the city to target different lines, thus multiplying the damage. It was simple logic, if you do three panels on one train, they only have one train to take out of service, but if you hit three lines with three panels, they have to take out three. Then your chances were good that at least one train would run, and if you were lucky, perhaps all three. You were definitely guaranteed to cause more grief that way. From the new school recruits, Les found a like-minded ally in Run. Similarly, he was another full-time, devoted graffiti manic up for anything. He studied the train systems in minute detail and brought a lot of new information into the crew, especially in regards to the Metro. Together, he and Les inspired the Metro Monsters and other radical actions. Already, MOAS knew ‘more, bigger and faster’ was possible with teamwork, but now that they were truly a monster force, their potential grew significantly. MOAS started to dream up extreme missions that put physical endurance to the test. Les had already set an impressive standard back in ‘96, mobilizing the crew to paint the equivalent of 110

one whole car a week for a year. Now, with a large and enthusiastic team, it was time to up the ante. From 2005 to 2006, MOAS chose to do not one, but the equivalent of two whole cars a week for a year. It was unreal. On a practical level truly insane. Imagine for a moment the sheer logistics of such action: the amount of cans you would need, how you get the ladder, the cans and the guys from A to B, sneakily, on say a twice-weekly basis in between all the other graffiti actions, and stay motivated all year long. Next came whole trains followed by one-man whole train actions; there was no time to rest. MOAS was organized, systematic and fast becoming top fit. Train writing has always been considered an extreme sport, but there is extreme and then there is MOAS. They gave the word a whole new meaning as they pushed themselves and train writing to the edge of insanity and beyond. With ready manpower they could realize projects that in the past seemed practically impossible or purely manic, hash-induced talk. Les states, “everybody who has ever been in MOAS taught me not to set any boundaries. Don’t think ‘can we do this?’. Just say ‘we want to do this, this is our dream and we can do it.’” High on their achievements, it was an explosive time for MOAS. On street level, they not only focused their attention on causing trouble for the authorities but also had to keep an eye on the scene. Now that everybody and his cousin was dabbling in train writing, there were plenty of little

upstarts ready to test the MOAS legend. Other hardcore train crews were also stepping up to have their go at the big league and all of a sudden the pressure was on. Outsiders were curious to see how the new school MOAS would fare and so they nudged a little here, and pushed a little there until pandemonium broke out. Indeed, MOAS was as tough as ever, in fact some of the new members took the monster image a bit too far. In time, everything spiraled out of control. They were going too hard, too fast, too quick and lost their way. MOAS had grown too big to handle. The egos were too great. No longer unified for the greater good of train graff, small MOAS groups worked independently with no real care for each other or the crew at large. For many, the name became an excuse to behave badly beyond graffiti limits. The vibe had changed, somehow they had created a bigger monster than they could have ever imagined. Slowly, it was not just Copenhagen ducking for cover; MOAS too was looking for shelter. Mins reflects, “in a way we almost killed ourselves, taking in just a lot of people who didn’t really fit in the crew.”

Nobody can come up with “twenty years every day bombing on the trains like these guys and I mean every day since fuckin’ 1991! Sabe

Mins: There is one guy who cleans the windows and we hate him. If you paint the windows, he comes and scratches them and your piece is crossed out. This is a worker who hates it and we’ve lost a lot of pieces to that asshole, even whole cars. Two times we did a whole car cleanup because he did this and we wanted really good photos. He did this a lot of times and one time when Les was in the bushes, he confronted this guy with a fucking stick in his hand and said “hey, next time you cross my piece, be careful where you are walking.” And then Les just left. For a while afterwards we didn’t see any scratched pieces.

germany is hardcore and always out there being true “toAtom the culture, banging out whole cars and super nice burners, panels and walls. He is a legend and we are proud to have him in our crew. MOAS

Atom from Germany, Sir C “from London and Rush from

Belgium, you have to give these guys respect and take care of them, because they have no crews to back them up, they have to work alone. They’re one-man armies. MOAS

MONSTERS OF ART– 20 Years of Havoc

Europe’s most notorious train crew, Monsters Of Art, celebrates 20 years of train havoc. It is with great pleasure that we honor their anniversary with a monster edition of ON THE RUN. Join us for a rare and privileged glimpse into the unruly world of MOAS. With over 200 pages that detail MOAS’s history and unique crew concept, along with classic tales from the train yard, including great escapes, writer beef, legendary busts, extreme graffiti feats, trains, trains and more trains. This is a must-have for all diehard fans of train graffiti. 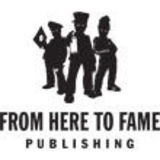 From Here To Fame Publishing