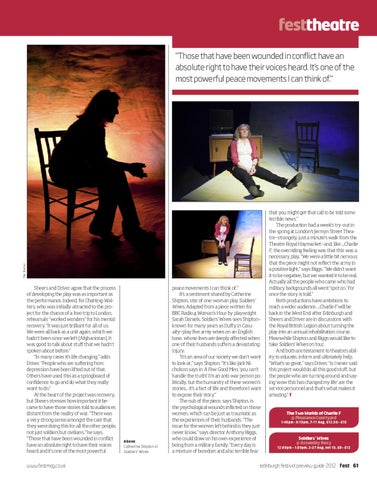 “Those that have been wounded in conflict have an absolute right to have their voices heard. It’s one of the most powerful peace movements I can think of.”

Sheers and Driver agree that the process of developing the play was as important as the performance. Indeed, for Chatting-Walters, who was initially attracted to the project for the chance of a free trip to London, rehearsals “worked wonders” for his mental recovery. “It was just brilliant for all of us. We were all back as a unit again, which we hadn’t been since we left [Afghanistan]. It was good to talk about stuff that we hadn’t spoken about before.” “In many cases it’s life changing,” adds Driver. “People who are suffering from depression have been lifted out of that. Others have used this as a springboard of confidence to go and do what they really want to do.” At the heart of the project was recovery, but Sheers stresses how important it became to have those stories told to audiences distant from the reality of war. “There was a very strong sense amongst the cast that they were doing this for all the other people, not just soldiers but civilians,” he says. “Those that have been wounded in conflict have an absolute right to have their voices heard and it’s one of the most powerful

Above Catherine Shipton in Soldiers’ Wives

peace movements I can think of.” It’s a sentiment shared by Catherine Shipton, star of one-woman play Soldiers’ Wives. Adapted from a piece written for BBC Radio 4 Woman’s Hour by playwright Sarah Daniels, Soldiers’ Wives sees Shipton— known for many years as Duffy in Casualty—play five army wives on an English base, whose lives are deeply affected when one of their husbands suffers a devastating injury. “It’s an area of our society we don’t want to look at,” says Shipton. “It’s like Jack Nicholson says in A Few Good Men, ‘you can’t handle the truth!’ I’m an anti-war person politically, but the humanity of these women’s stories... it’s a fact of life and therefore I want to expose their story.” The nub of the piece, says Shipton, is the psychological wounds inflicted on those women, which can be just as traumatic as the experiences of their husbands. “The issue for the women left behind is they just never know,” says director Anthony Biggs, who could draw on his own experience of being from a military family. “Every day is a mixture of boredom and also terrible fear

that you might get that call to be told some terrible news.” The production had a week’s try-out in the spring at London’s Jermyn Street Theatre—strangely, just a minute’s walk from the Theatre Royal Haymarket—and, like ...Charlie F, the overriding feeling was that this was a necessary play. “We were a little bit nervous that the piece might not reflect the army in a positive light,” says Biggs. “We didn’t want it to be negative, but we wanted it to be real. Actually all the people who came who had military backgrounds all went ‘spot on.’ For once the story is told.” Both productions have ambitions to reach a wider audience. ...Charlie F will be back in the West End after Edinburgh and Sheers and Driver are in discussions with the Royal British Legion about turning the play into an annual rehabilitation course. Meanwhile Shipton and Biggs would like to take Soldiers’ Wives on tour. And both are testament to theatre’s ability to educate, inform and ultimately help. “What’s so great,” says Driver, “is I never said this project would do all this good stuff, but the people who are turning around and saying ‘wow this has changed my life’ are the service personnel and that’s what makes it amazing.” f 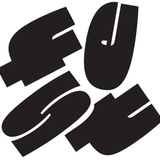