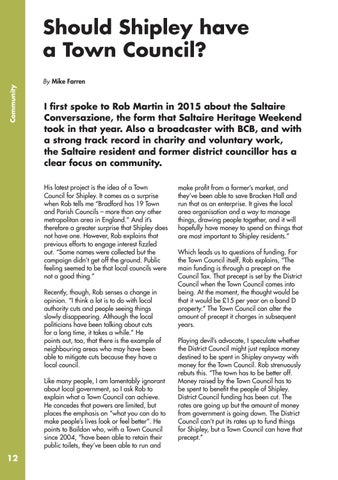 Should Shipley have a Town Council? By Mike Farren

I first spoke to Rob Martin in 2015 about the Saltaire Conversazione, the form that Saltaire Heritage Weekend took in that year. Also a broadcaster with BCB, and with a strong track record in charity and voluntary work, the Saltaire resident and former district councillor has a clear focus on community. His latest project is the idea of a Town Council for Shipley. It comes as a surprise when Rob tells me “Bradford has 19 Town and Parish Councils – more than any other metropolitan area in England.” And it’s therefore a greater surprise that Shipley does not have one. However, Rob explains that previous efforts to engage interest fizzled out. “Some names were collected but the campaign didn’t get off the ground. Public feeling seemed to be that local councils were not a good thing.” Recently, though, Rob senses a change in opinion. “I think a lot is to do with local authority cuts and people seeing things slowly disappearing. Although the local politicians have been talking about cuts for a long time, it takes a while.” He points out, too, that there is the example of neighbouring areas who may have been able to mitigate cuts because they have a local council. Like many people, I am lamentably ignorant about local government, so I ask Rob to explain what a Town Council can achieve. He concedes that powers are limited, but places the emphasis on “what you can do to make people’s lives look or feel better”. He points to Baildon who, with a Town Council since 2004, “have been able to retain their public toilets, they’ve been able to run and

make profit from a farmer’s market, and they’ve been able to save Bracken Hall and run that as an enterprise. It gives the local area organisation and a way to manage things, drawing people together, and it will hopefully have money to spend on things that are most important to Shipley residents.” Which leads us to questions of funding. For the Town Council itself, Rob explains, “The main funding is through a precept on the Council Tax. That precept is set by the District Council when the Town Council comes into being. At the moment, the thought would be that it would be £15 per year on a band D property.” The Town Council can alter the amount of precept it charges in subsequent years. Playing devil’s advocate, I speculate whether the District Council might just replace money destined to be spent in Shipley anyway with money for the Town Council. Rob strenuously rebuts this. “The town has to be better off. Money raised by the Town Council has to be spent to benefit the people of Shipley. District Council funding has been cut. The rates are going up but the amount of money from government is going down. The District Council can’t put its rates up to fund things for Shipley, but a Town Council can have that precept.” 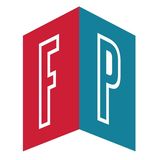