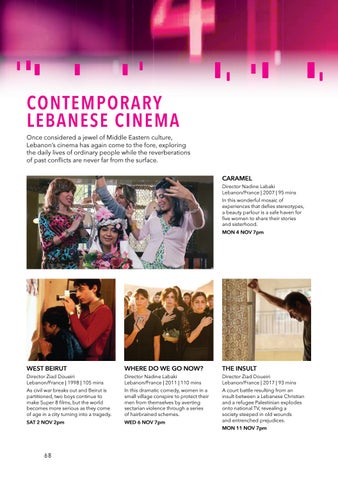 Once considered a jewel of Middle Eastern culture, Lebanonâ&#x20AC;&#x2122;s cinema has again come to the fore, exploring the daily lives of ordinary people while the reverberations of past conflicts are never far from the surface. CARAMEL

In this wonderful mosaic of experiences that defies stereotypes, a beauty parlour is a safe haven for five women to share their stories and sisterhood. MON 4 NOV 7pm

WHERE DO WE GO NOW?

As civil war breaks out and Beirut is partitioned, two boys continue to make Super 8 films, but the world becomes more serious as they come of age in a city turning into a tragedy.

In this dramatic comedy, women in a small village conspire to protect their men from themselves by averting sectarian violence through a series of hairbrained schemes.

A court battle resulting from an insult between a Lebanese Christian and a refugee Palestinian explodes onto national TV, revealing a society steeped in old wounds and entrenched prejudices.