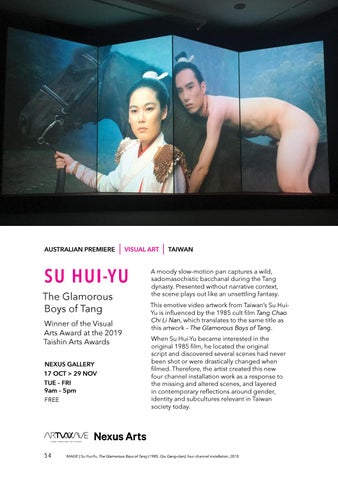 The Glamorous Boys of Tang

A moody slow-motion pan captures a wild, sadomasochistic bacchanal during the Tang dynasty. Presented without narrative context, the scene plays out like an unsettling fantasy. This emotive video artwork from Taiwan’s Su HuiYu is influenced by the 1985 cult film Tang Chao Chi Li Nan, which translates to the same title as this artwork – The Glamorous Boys of Tang. When Su Hui-Yu became interested in the original 1985 film, he located the original script and discovered several scenes had never been shot or were drastically changed when filmed. Therefore, the artist created this new four channel installation work as a response to the missing and altered scenes, and layered in contemporary reflections around gender, identity and subcultures relevant in Taiwan society today.