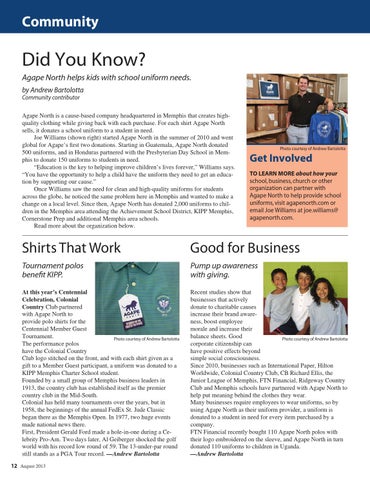 Did You Know? Agape North helps kids with school uniform needs. by Andrew Bartolotta Community contributor Agape North is a cause-based company headquartered in Memphis that creates highquality clothing while giving back with each purchase. For each shirt Agape North sells, it donates a school uniform to a student in need. Joe Williams (shown right) started Agape North in the summer of 2010 and went global for Agape’s first two donations. Starting in Guatemala, Agape North donated 500 uniforms, and in Honduras partnered with the Presbyterian Day School in Memphis to donate 150 uniforms to students in need. “Education is the key to helping improve children’s lives forever,” Williams says. “You have the opportunity to help a child have the uniform they need to get an education by supporting our cause.” Once Williams saw the need for clean and high-quality uniforms for students across the globe, he noticed the same problem here in Memphis and wanted to make a change on a local level. Since then, Agape North has donated 2,000 uniforms to children in the Memphis area attending the Achievement School District, KIPP Memphis, Cornerstone Prep and additional Memphis area schools. Read more about the organization below.

Get Involved To learn more about how your school, business, church or other organization can partner with Agape North to help provide school uniforms, visit agapenorth.com or email Joe Williams at joe.williams@ agapenorth.com.

Pump up awareness with giving.

At this year’s Centennial Celebration, Colonial Country Club partnered with Agape North to provide polo shirts for the Centennial Member Guest Tournament. Photo courtesy of Andrew Bartolotta The performance polos have the Colonial Country Club logo stitched on the front, and with each shirt given as a gift to a Member Guest participant, a uniform was donated to a KIPP Memphis Charter School student. Founded by a small group of Memphis business leaders in 1913, the country club has established itself as the premier country club in the Mid-South. Colonial has held many tournaments over the years, but in 1958, the beginnings of the annual FedEx St. Jude Classic began there as the Memphis Open. In 1977, two huge events made national news there. First, President Gerald Ford made a hole-in-one during a Celebrity Pro-Am. Two days later, Al Geiberger shocked the golf world with his record low round of 59. The 13-under-par round still stands as a PGA Tour record. —Andrew Bartolotta

Recent studies show that businesses that actively donate to charitable causes increase their brand awareness, boost employee morale and increase their balance sheets. Good Photo courtesy of Andrew Bartolotta corporate citizenship can have positive effects beyond simple social consciousness. Since 2010, businesses such as International Paper, Hilton Worldwide, Colonial Country Club, CB Richard Ellis, the Junior League of Memphis, FTN Financial, Ridgeway Country Club and Memphis schools have partnered with Agape North to help put meaning behind the clothes they wear. Many businesses require employees to wear uniforms, so by using Agape North as their uniform provider, a uniform is donated to a student in need for every item purchased by a company. FTN Financial recently bought 110 Agape North polos with their logo embroidered on the sleeve, and Agape North in turn donated 110 uniforms to children in Uganda. —Andrew Bartolotta