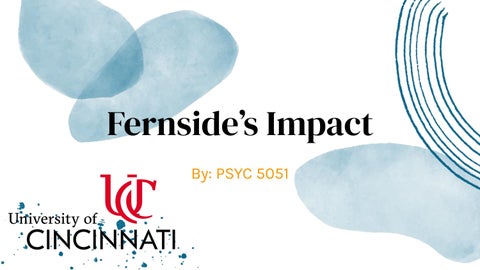 Research Question Does Fernside’s usage of group based grief counseling provide an immediate and/or lasting effect for the alumni of the program?

The highest number of participants participated in the evening program (82%), and then followed with the camp program (14%) and school program (13%).

Focused on people who participated in the evening program

The survey was also posted to the Fernside Facebook page

Deleted all outliers from survey answers

Was Fernside helpful in changing how you acted and/or felt at the time?

Was Fernside helpful in changing how you acted and/or felt at the time?

“It was extremely helpful for my son and I to attend these bi-weekly meetings because it set aside time for us to intentionally process the grief. My son was able to develop the terminology for his grief and self expression skills to let me know how he was processing his feelings.”

“Fernside helped me deal with my child&#39;s grief and talking with other individuals supporting children helped me know what my daughter was going through was pretty typical. Just knowing there were people to talk to that were going through the same experience was comforting.”

No, I would not change anything

“For me it was perfect, I wouldn’t change a thing.” “At times I felt like I didn’t really belong because my loss was a nephew in a car accident. Most of the others were children who committed suicide. Maybe there could be different groups based on that type of loss as well.” “Add more locations. The main reason we stopped bringing my sister in law was due to the distance from our home to Fernside.”

Is there anything else you would like Fernside to know

“The program to be longer.”

Alumni wanted Fernside to “The releasing of balloons was neat, know how grateful they were. although this is environmentally terrible. I Many alumni shared that they wish there were now about way to &quot;release&quot; like volunteer at Fernside. maybe dropping some item There werenatural suggestions forinto ﬂowing water stream or river, ormade putting speciﬁc groups to be words on paper into ﬁre, basedaon theetc. type Balloons of loss one are terrible wildlife.” wasfor going through.

Short-Term Impact 1. Fernside did have an impact at the time. a.

The impact was not the same for everyone.

2. These results suggest that Fernside programming is particularly effective for White women.

“At 14, I felt utterly alone. I didn&#39;t know anyone else my age who had lost a parent. No one in my friend base or peer base at school had any idea what I was going through. I felt alone and was bullied for my grief and the way I expressed it. Fernside was the ﬁrst place I met anyone else who understood what I was going through and helped me ﬁnd an outlet for my grief. I felt included and not &quot;weird&quot;.

“I look and deal with daily situations differently, less anger because I was able to talk and connect with others that knew and felt exactly what I was going through even with the smallest simplest activities.” “I believe I started to regain the positivity that I had before the loss.”

“I am wanting to help support families that are grieving. I am an early childhood educator and I have been able to help other families because of Fernside”

“I learned the proper skills to deal with grief, as well as expressing my emotions.”

“I learned every person has a story. And to accept what I can&#39;t change about what happened”

Many participants still use some of the skills they learned at Fernside today. a.

Are able to help others cope with grief as well.

Would recommend Fernside to others

Where there any specific activities that were impactful?

Where there any specific activities that were impactful? Art “The broken glass and glueing it back together it helped to let me know I can feel whole again”

“The balloon release at the end was impactful because it gave us closure to the process of ending classes, as well as a signal to our loved ones”

Is there anything else you would like Fernside to know

“My children talk about the summer camp all the time. I am so grateful to Fernside for that Alumni wanted Fernside to know how grateful they were. Many experience.”

alumni shared that they now volunteer at Fernside. There were suggestions for speciﬁc groups to AcknowledgingbeOthers’ Griefon the type of loss made based one was going through.

Is there anything else you would like Fernside to know? Grateful “Fernside is a blessing to the Cincinnati community and the many families it has served over the past 35 years. My family is at a better place today because of our experience.” “I would like Fernside to know that you help me through a dark time in my life I time when I was confused, hurting and angry all at the same time, but Fernside and my family was there to help pull me out of that dark place and for that I am eternally grateful.”

Volunteering “After fernside, I volunteered there for a few years. After that, I volunteered at a grief center in Dayton, OH called Oak Tree Corner. Now I am in school for occupational therapy and am very interested in seeing how OT can be implemented into the grief setting. Fernside was the beginning of that journey!” “I just can&#39;t thank Fernside enough. I truly miss volunteering there and as my kids get older and I have more time, I would love to come back and support this amazing organization more.”

“My husband passed by suicide. I remember at the time wishing there Alumni wanted Fernside to know may have been a suicide specific how grateful they were. Many group, since there is a lot of complex alumni that they now griefshared that comes with that. I hope volunteer at Fernside. There maybe that something were of that sort is suggestions for speciﬁc groups to love offered now, and if not I would be made based on of of loss to volunteer tothe be type a part it.” one was going through.

“I hope the program has adapted to the increase of overdose deaths. helping educate and inform. offer other avenues of counseling for the family such as the programs for families of drug addicts, ect.”

Flexibility for time spent in the Program

Data from the survey supports the research question. There is both a short-term and long-term impact for the alumni of Fernside. The majority of alumni would recommend Fernside to someone else grieving. The amount of responses we got in and of itself shows how much people still care about Fernside 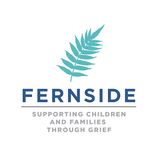