‘I didn’t think beforehand that we’d have a season like this, we could hardly have performed better,’ concluded Dennis Kuipers realistically after the final world championship rally of 2011. Numerous teams met their Waterloo during Rally Wales GB on the super-slippery gravel roads through the woods, but not the FERM duo. Dennis and co-driver Frederic Miclotte advanced in one year from sixteenth to eighth position in the final standings. The

position was anything but a gift for the duo. Exploring their limits was accompanied by a few ‘oops’ moments when Dennis Kuipers needed catlike reflexes to keep the Ford Fiesta RS WRC on the road. The attack mode was switched on because the FERM team wanted to end the season with a fine result. This objective increasingly took shape as the four-day rally progressed through the breathtaking Welsh landscape. The duo came up from thirteenth place after the opening day through tenth place

on the second day to eighth place at the finish in Cardiff. Over the intervening kilometres, Dennis had to contend with tricky conditions. ‘The grip you have varies quite a lot during a stage,’ he said. ‘The tyres bit in to the surface on some sections, but on others it felt as though a layer of oil was floating on the road.’ A puncture towards the end of the final stage on Saturday morning resulted in more exciting moments, but ultimately not in a loss of time. In the colours of the winning design of

the Draw ‘n’ Race competition, the FERM team marked up their fourth successive top ten finish. ‘This strong series underscores the progression we’ve made this season,’ said codriver Frederic Miclotte. ‘We showed in Wales that we’ve also got faster on unsurfaced sections.’ This season the FERM World Rally Team came fifth in the manufacturers’ championship. Dennis and Fred together ended the season in twelfth place in the world championship.

The British round of the WRC is just as logical as James Bond in a fast sports car. The tradition stretches back to 1973, the start of the official world championship. And 38 years down the road, the modern-day rally heroes still enjoy the inimitable gravel paths through the woods. After four days of slipping and sliding, a Brazilian newcomer was already looking forward to his next adventure in the Welsh woods. The British stages come close to Valhalla for drivers with a passion for unsurfaced stages. Magical Even when the sun shines and the gravel is dry, the numerous hills and alternating mix of high-speed bends and technical sections

through the enchanting Welsh landscape are a treat. If you throw in mist, rain, mud and sometimes even snow and ice, you get something magical. ‘This event has a special place in my heart’, said Dennis Kuipers. ‘Its unpredictable nature makes it a fantastic rally.’ In these highly demanding conditions, a glance at the list of past winners shows that the Scandinavians have had the

FERM Rallyfact In Wales the FERM World Rally Team treated five prizewinners to a unique look behind the scenes of the WRC. The Portuguese winner of the Draw ‘n’ Race competition, Helio Rodrigues, saw with a friend how Dennis Kuipers and Frederic Miclotte raced to eighth place in his colours. The Belgian winner of the WRC.com competition was also in attendance, as were two DIY enthusiasts from the Netherlands whose purchase of a FERM Power Tool came with an extra in the form of a completely organised trip. The FERM VIPs enjoyed live rally action in the Welsh woods, joined Dennis and Fred for a meet-and-greet and, last not least, witnessed how the servicing team restored the FERM Ford to as-new condition in no time. ‘It was truly a terrific experience’, said one of the Dutch prizewinners.

upper hand since 1973. Number 8 for Loeb Previous victors include giants like Bjorn Waldegard, Stig Blomqvist, Ari Vatanen, Marcus Gronholm and Peter Solberg, but the British have also shone on their home ground. Richard Burns and Colin McRae each won the event three times. Sebastien Loeb has ruled the last three editions. Although the Frenchman failed to finish this year, he still picked up

his eighth world title in Wales after his rival for the crown, Mikko Hirvonen, had to pull out on the second day. Latvala wins Jari-Matti Latvala held the flag high for Ford. The Finn won convincingly, ahead of Mads Ostberg and Henning Solberg, so the entire podium was reserved for Ford and Scandinavia. Victory in the Power Stage went to Sebastien Ogier (Citroen).

The video from Wales! 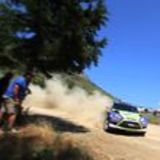 DENNIS KUIPERS HALVED HIS 2010 CLASSIFICATION. FROM SIXTEENTH PLACE LAST YEAR HE MOVED UP TO EIGHTH PLACE THIS YEAR. HIS SEVENTH TOP TEN FIN...

DENNIS KUIPERS HALVED HIS 2010 CLASSIFICATION. FROM SIXTEENTH PLACE LAST YEAR HE MOVED UP TO EIGHTH PLACE THIS YEAR. HIS SEVENTH TOP TEN FIN...