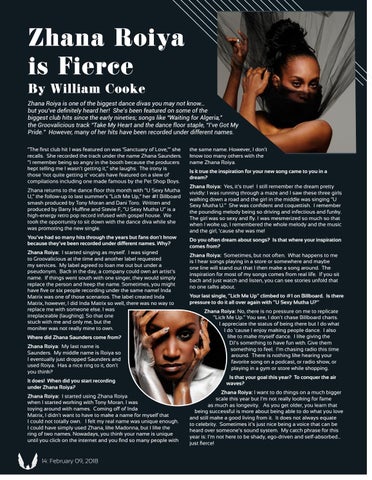 Zhana Roiya is Fierce By William Cooke Zhana Roiya is one of the biggest dance divas you may not know… but you’ve definitely heard her!  She’s been featured on some of the biggest club hits since the early nineties; songs like “Waiting for Algeria,” the Groovalicious track “Take My Heart and the dance floor staple, “I’ve Got My Pride.”  However, many of her hits have been recorded under different names. “The first club hit I was featured on was ‘Sanctuary of Love,’” she recalls.  She recorded the track under the name Zhana Saunders.   “I remember being so angry in the booth because the producers kept telling me I wasn’t getting it,” she laughs.  The irony is those ‘not quite getting it’ vocals have featured on a slew of compilations including one made famous by the Pet Shop Boys. Zhana returns to the dance floor this month with “U Sexy Mutha U,” the follow-up to last summer’s “Lick Me Up,” her #1 Billboard smash produced by Tony Moran and Dani Toro.  Written and produced by Barry Huffine and Stevie F, “U Sexy Mutha U” is a high-energy retro pop record infused with gospel house.  We took the opportunity to sit down with the dance diva while she was promoting the new single. You’ve had so many hits through the years but fans don’t know because they’ve been recorded under different names. Why? Zhana Roiya:  I started singing as myself.  I was signed to Groovalicious at the time and another label requested my services.  My label agreed to loan me out but under a pseudonym.  Back in the day, a company could own an artist’s name.  If things went south with one singer, they would simply replace the person and keep the name. Sometimes, you might have five or six people recording under the same name! Inda Matrix was one of those scenarios. The label created Inda Matrix, however, I did Inda Matrix so well, there was no way to replace me with someone else. I was irreplaceable (laughing). So that one stuck with me and only me, but the moniker was not really mine to own. Where did Zhana Saunders come from? Zhana Roiya:  My last name is Saunders.  My middle name is Roiya so I eventually just dropped Saunders and used Roiya.  Has a nice ring to it, don’t you think? It does!  When did you start recording under Zhana Roiya? Zhana Roiya:  I started using Zhana Roiya when I started working with Tony Moran. I was toying around with names.  Coming off of Inda Matrix, I didn’t want to have to make a name for myself that I could not totally own.   I felt my real name was unique enough.  I could have simply used Zhana, like Madonna, but I like the ring of two names. Nowadays, you think your name is unique until you click on the internet and you find so many people with

the same name. However, I don’t know too many others with the name Zhana Roiya.   Is it true the inspiration for your new song came to you in a dream?  Zhana Roiya:  Yes, it’s true!  I still remember the dream pretty vividly: I was running through a maze and I saw these three girls walking down a road and the girl in the middle was singing “U Sexy Mutha U.”  She was confident and coquettish.  I remember the pounding melody being so driving and infectious and funky.  The girl was so sexy and fly. I was mesmerized so much so that when I woke up, I remembered the whole melody and the music and the girl, ‘cause she was me! Do you often dream about songs?  Is that where your inspiration comes from? Zhana Roiya:  Sometimes, but not often.  What happens to me is I hear songs playing in a store or somewhere and maybe one line will stand out that I then make a song around.  The inspiration for most of my songs comes from real life.  If you sit back and just watch and listen, you can see stories unfold that no one talks about. Your last single, “Lick Me Up” climbed to #1 on Billboard.  Is there pressure to do it all over again with “U Sexy Mutha U?” Zhana Roiya: No, there is no pressure on me to replicate “Lick Me Up.” You see, I don’t chase Billboard charts.  I appreciate the status of being there but I do what I do ‘cause I enjoy making people dance.  I also like to make myself dance.  I like giving the DJ’s something to have fun with. Give them something to feel.  I’m chasing radio this time around.  There is nothing like hearing your favorite song on a podcast, or radio show, or playing in a gym or store while shopping.  Is that your goal this year?  To conquer the air waves? Zhana Roiya: I want to do things on a much bigger scale this year but I’m not really looking for fame as much as longevity.   As you get older, you learn that being successful is more about being able to do what you love and still make a good living from it.  It does not always equate to celebrity.  Sometimes it’s just nice being a voice that can be heard over someone’s sound system.  My catch phrase for this year is: I’m not here to be shady, ego-driven and self-absorbed… just fierce! 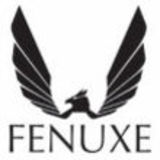