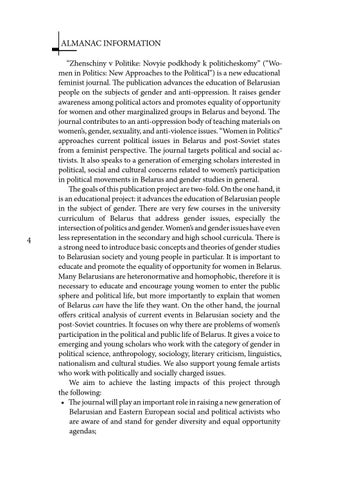 “Zhenschiny v Politike: Novyie podkhody k politicheskomy” (“Women in Politics: New Approaches to the Political”) is a new educational feminist journal. The publication advances the education of Belarusian people on the subjects of gender and anti-oppression. It raises gender awareness among political actors and promotes equality of opportunity for women and other marginalized groups in Belarus and beyond. The journal contributes to an anti-oppression body of teaching materials on women’s, gender, sexuality, and anti-violence issues. “Women in Politics” approaches current political issues in Belarus and post-Soviet states from a feminist perspective. The journal targets political and social activists. It also speaks to a generation of emerging scholars interested in political, social and cultural concerns related to women’s participation in political movements in Belarus and gender studies in general. The goals of this publication project are two-fold. On the one hand, it is an educational project: it advances the education of Belarusian people in the subject of gender. There are very few courses in the university curriculum of Belarus that address gender issues, especially the intersection of politics and gender. Women’s and gender issues have even less representation in the secondary and high school curricula. There is a strong need to introduce basic concepts and theories of gender studies to Belarusian society and young people in particular. It is important to educate and promote the equality of opportunity for women in Belarus. Many Belarusians are heteronormative and homophobic, therefore it is necessary to educate and encourage young women to enter the public sphere and political life, but more importantly to explain that women of Belarus can have the life they want. On the other hand, the journal offers critical analysis of current events in Belarusian society and the post-Soviet countries. It focuses on why there are problems of women’s participation in the political and public life of Belarus. It gives a voice to emerging and young scholars who work with the category of gender in political science, anthropology, sociology, literary criticism, linguistics, nationalism and cultural studies. We also support young female artists who work with politically and socially charged issues. We aim to achieve the lasting impacts of this project through the following: • The journal will play an important role in raising a new generation of Belarusian and Eastern European social and political activists who are aware of and stand for gender diversity and equal opportunity agendas; 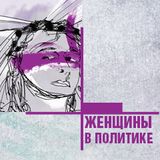