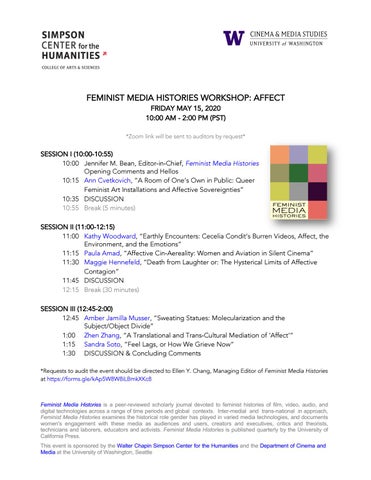 Feminist Media Histories is a peer-reviewed scholarly journal devoted to feminist histories of film, video, audio, and digital technologies across a range of time periods and global contexts. Inter-medial and trans-national in approach, Feminist Media Histories examines the historical role gender has played in varied media technologies, and documents women&#39;s engagement with these media as audiences and users, creators and executives, critics and theorists, technicians and laborers, educators and activists. Feminist Media Histories is published quarterly by the University of California Press. This event is sponsored by the Walter Chapin Simpson Center for the Humanities and the Department of Cinema and Media at the University of Washington, Seattle

Ann Cvetkovich is Professor and Director of the Pauline Jewett Institute of Women’s and Gender Studies at Carleton University. She is the author of Mixed Feelings: Feminism, Mass Culture, and Victorian Sensationalism (Rutgers, 1992); An Archive of Feelings: Trauma, Sexuality, and Lesbian Public Cultures (Duke, 2003); and Depression: A Public Feeling (Duke, 2012). She co-edited (with Ann Pellegrini) “Public Sentiments,” a special issue of The Scholar and Feminist Online, and (with Janet Staiger and Ann Reynolds) Political Emotions (Routledge, 2010). She has been coeditor, with Annamarie Jagose, of GLQ: A Journal of Lesbian and Gay Studies. Her current writing projects focus on the current state of LGBTQ archives and the creative use of them by artists to create counterarchives and interventions in public history.

Kathleen Woodward is Lockwood Professor in the Humanities and Professor of English at the University of Washington where she directs the Simpson Center for the Humanities. She is the author of Statistical Panic: Cultural Politics and Poetics of Emotions (2009), Aging and Its Discontents: Freud and Other Fictions (1991), and At Last, the Real Distinguished Thing: The Late Poems of Eliot, Pound, Stevens, and Williams (1980). Her essays on the emotions, women and aging, and technology and culture have appeared in American Literary History, Discourse, Indiana Law Journal, SubStance, Journal of Women&#39;s History, South Atlantic Review, and Cultural Critique. She is also the editor of Figuring Age: Women, Bodies, Generations (1999) and The Myths of Information: Technology and Postindustrial Culture (1980). From 1986-1995 she coedited Discourse: Journal for Theoretical Studies in Media and Culture. Past president of the Consortium of Humanities Centers and Institutes, she is a member of the Board of Directors of the Association of American Colleges and Universities (AAC+U) and the Steering Committee of HASTAC. Her most recent essay, “On Feminist Collaboration, Digital Media, and Affect,” appears in the edited collection Feminist Interventions in Participatory Media: Pedagogy, Publics, Practice.

Paula Amad is an Associate Professor of Film Studies and Chair of the Department of Cinematic Arts, University of Iowa. She is the author of Counter-Archive: Film, the Everyday and Albert Kahn&#39;s Archives de la Planète (Columbia University Press, 2010), which was deemed a highly recommended book by the Kraszna-Krausz Foundation Book Awards (2011), and numerous articles in journals such as Representations, Camera Obscura, History of Photography, Cinema Journal, Film History, and Framework. She is currently completing a second book focused on the airplane and camera as the twin vision and dream machines of early twentieth-century modernity. Her most recent publication related to this project is forthcoming in Modernism/Modernity (Spring 2020) and titled “ ‘The World’s Heavy Gaze’: Recovering Cinaereality in the Post-War Avant-Gardes.” She is a recipient of the Getty Foundation Postdoctoral Fellowship (2006-7), a Shpilman Institute of Photography Research Award (2011), a Visiting Scholar Fellowship at the Max Planck Institute for the History of Science in Berlin (Fall 2011), and the Katherine Singer Kovács Outstanding Essay Award from the Society of Cinema and Media Studies (2014). At the University of Iowa, she teaches and researches at the intersection of film history, film theory, and literary studies, with a particular interest in French cinema, nonfiction film, archive and memory studies, postcolonial theory in the visual domain, and the relationship between photography and film.

Maggie Hennefeld is McKnight Presidential Fellow and Associate Professor of Cultural Studies and Comparative Literature at the University of Minnesota, Twin Cities. She is the author of the award-winning book, Specters of Slapstick and Silent Film Comediennes (Columbia UP, 2018), an editor of the journal Cultural Critique, and co-editor of two volumes, Unwatchable (Rutgers UP, 2019) and Abjection Incorporated: Mediating the Politics of Pleasure and Violence (Duke UP, 2020). She is currently writing a book about the history of women who allegedly died from laughing too hard, considered alongside theories of female hysteria and historiographies of early cinema. In addition to her academic writing, she is a cultural critic and international curator of silent film programs in Italy, France, Mexico, Canada, and throughout the United States.

Ă&amp;#x; Back to Workshop Program

Amber Jamilla Musser is Associate Professor of American Studies at George Washington University. She is the author of Sensual Excess: Queer Femininity and Brown Jouissance (NYU Press, 2018) and Sensational Flesh: Race, Power, and Masochism (NYU Press, 2014). She is co-editor of a special issue of ASAP Journal on “Queer Form,” and her work on race, sexuality, critical theory and queer of color critique has been published in Signs, Feminist Formations, Feminist Theory, differences, Social Text, Women and Performance, GLQ: A Journal of Lesbian and Gay Studies, and Palimpsest among many others. She has held fellowships at New York University&#39;s Draper Program in Gender Studies and Brown University&#39;s Pembroke Center for Teaching and Research on Women. Her research has been supported by grants from the Ruth Landes Memorial Fellowship and the Arts Writers’ Grant from the Warhol Foundation. She previously taught gender studies at New York University and Washington University in St. Louis. She also writes art criticism for The Brooklyn Rail.

Zhang Zhen 张真 is Associate Professor in Cinema Studies and director of the Asian Film and Media Initiative at New York University. Her scholarly publications include An Amorous History of the Silver Screen: Shanghai Cinema 1896–1937 (2005), The Urban Generation: Chinese Cinema and Society at the Turn of the Twenty-first Century (2007) and DV-Made China: Digital Subjects and Social Transformations after Independent Film (2015, co-edited with Angela Zito). She also has published a poetry collection in Chinese, Dream Loft 梦中楼阁 (1997), poems and essays in numerous journals and anthologies in multiple languages, including Poetry Across Oceans: Anthology of Chinese American Diaspora Poetry (2014). She is the founding director of the Reel China Biennial at NYU and has curated film programs for the Film Society at the Lincoln Center for Performing Arts, the Museum of Modern Art and Women Makes Waves Film Festival in Taiwan.

Sandra K. Soto is Associate Professor of Gender and Women’s Studies at the University of Arizona, past-editor of Feminist Formations, and co-editor of The Oxford Research Encyclopedia of Latino Literature. Her book, Reading Chican@ Like a Queer: The De-Mastery of Desire (2010), replaces the race-based oppositional paradigm of Chicano literary studies with a less didactic, more flexible, framework geared for a queer analysis of the discursive relationship between racialization and sexuality. Her interdisciplinary research and teaching interests are in Chicana/o and Latina/o literary and cultural studies, feminist theory, gender studies, and queer theory. She is currently working on a book tentatively titled “Feeling Greater Mexico,” which mobilizes queer theories of affect to pursue unlikely connections between critical transnational studies and U.S. ethnic studies. She also writes about the politics of Arizona, and in 2010, she and co-author Miranda Joseph received the NEA Excellence in the Academy Award in Democracy in Higher Education for their essay “Neoliberalism and the Battle over Ethnic Studies in Arizona.” At the University of Arizona, she is an affiliate of English, the Center for Latin American Studies, and the Mexican American Studies and Research Center. 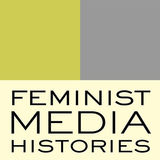