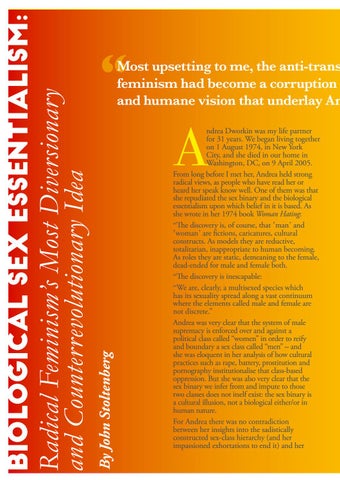 Most upsetting to me, the anti-trans feminism had become a corruption and humane vision that underlay An ndrea Dworkin was my life partner for 31 years. We began living together on 1 August 1974, in New York City, and she died in our home in Washington, DC, on 9 April 2005. From long before I met her, Andrea held strong radical views, as people who have read her or heard her speak know well. One of them was that she repudiated the sex binary and the biological essentialism upon which belief in it is based. As she wrote in her 1974 book Woman Hating: “The discovery is, of course, that ‛man’ and ‛woman’ are fictions, caricatures, cultural constructs. As models they are reductive, totalitarian, inappropriate to human becoming. As roles they are static, demeaning to the female, dead-ended for male and female both. “The discovery is inescapable: “We are, clearly, a multisexed species which has its sexuality spread along a vast continuum where the elements called male and female are not discrete.” Andrea was very clear that the system of male supremacy is enforced over and against a political class called “women” in order to reify and boundary a sex class called “men” – and she was eloquent in her analysis of how cultural practices such as rape, battery, prostitution and pornography institutionalise that class-based oppression. But she was also very clear that the sex binary we infer from and impute to those two classes does not itself exist: the sex binary is a cultural illusion, not a biological either/or in human nature. For Andrea there was no contradiction between her insights into the sadistically constructed sex-class hierarchy (and her impassioned exhortations to end it) and her