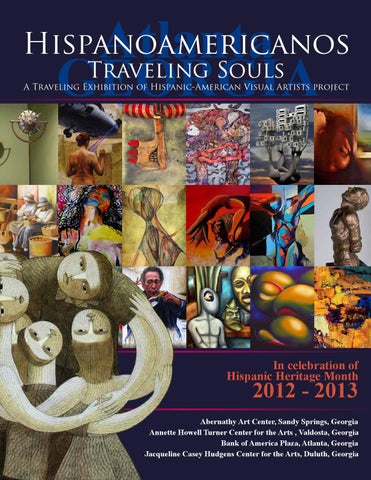 In celebration of Hispanic Heritage Month

A project created and directed by FĂŠlix Berroa since 2009.

Book/Catalog designed by Félix Berroa Photos credited to Omaira Berroa and the artists, used with their permission.

Translation from Spanish to English by:

Text revision and proofreading by:

Four people, four institutions. Thank you for believing in us. Lauren Bernazza, Director of Abernathy Art Center. Sandy Springs, Georgia. Bill Shenton, Curator of Annette Howell Turner Center for the Arts. Valdosta, Georgia. Susan Kendrick, Curator of Bank of America Plaza exhibitions. Commertial Art Consultants. Angela D. Nichols, Director of Education &amp; Public Programs. The Hudgens Center for the Arts. We thank Tony Pérez of Fulcro Insurance for the finantial contribution for the printing of this catalogue. Fulcro Insurance have office in USA, Puerto Rico and The Dominican Republic. Marga Gabarret and Guy Debbaudt, for their voluntary and uninterested collaboration in the development and preparation of the exhibit. Omar Prieto, for his work and collaboration with this project; providing consultancy and coordinating with a group of artists from his country. Pedro Santiago, for his help with the translation of the artist’s “statements”, text revision and proofreading. Freddy Barbosa, for his collaboration in the taking of photographs for this catalogue of the works of a large group of his compatriot artists. Omaira Berroa, for her assistance throughout the preparations of this project, at home and on Felix Berroa’s trips, and for the taking of several views of Atlanta and art centers published in this catalog. Also we thank to all the member in this project for their financial contribution to be use in the printing of this catalogue: Ana Fajardo Hill , Alfredo Scaroina, Andrés Rodríguez Santos, Domingo Castro Oliveros, Diego Ballestas, Edgar Ríos Malagón, Fabio Bedoya, Félix Dicló, Gerson Corzo, Gigi Pedraza, Gilma Carreño Rangel, Jorge Arcos, José Cándido Pineda, José Peña, José Ramón Tarazona Gelvez, Lilia Isabel Miranda, Luis Ferdinand Rodríguez, Marga Gabarret, Maria Sarmiento, Mariano Prado Vargas, Miguel Antonio Sánchez Zabala, Miguel Conesa-Osuna, Pedro Miguel Ortíz Guerrero, Pedro Santiago, Rachelle Scott, Rafael Motaniz, Raul Morilla, Rigoberto Peralta, Tamara Liz Rivera Boria, and Wilmer Jesús Martínez Manotas. 5

Goals and Philosophy of the HAVAP 1. - We are a project for the “diffusion and encounters of Hispanic-American artists” in United States and from their own countries. A kind of “Cultural Networking” of cooperation and exchange of exhibitions and information. The project aims to not only exhibit in the United States, but also in the countries where our “cultural allies” live. To facilitate this process, small groups in the Hispanic American countries (cultural allies), were created to represent our project. When exhibit opportunities arrive, they send their representations with works of Master artists and young creators who are emerging as promises in this difficult world of art. 2.- It is not a project that seeks to discover and disseminate “art scandals” (modern manifestos that seek to create scandals rather than contributing a legacy to art). We do not intend to be “the latest Coca-Cola in the desert”. We are a group of artists from various artistic styles ranging from realism, new realism or hyper-realism, magical realism, expressionism figurative and abstract, conceptual art, video art, etc. Members engaged in modern experiments (video art, conceptual art, performance, installations,...), are very cautiously selected in such a way that they do not conflict with the works of their more conservative colleagues. 3.- Another goal of our project is to form cultural partnerships with other institutions in order to better plan artistic exchanges, collaborations, exhibitions and artists’ talks. 4.- Highlighting talented artists among our members. 5.- Apply for grants or sponsorships to conduct a biennial and triennial exhibitions among its members. 6.- Publishing books of our exhibitions and possible biennial or triennial in our group project.

In 1980, after Felix Berroa’s return to the Dominican Republic from his Printmaking and Experimental Drawing studies in San Juan, Puerto Rico, he wanted to share what he had learned with his artist friends. He taught a free workshop and with the results of their work created an exhibition in the National Palace of Fine Arts (Palacio Nacional de Bellas Artes) in Santo Domingo (See photo 3). This event and the “cultural encounters” in Cuba (1978), Puerto Rico (1979-80) and more recently in Colombia were incentives to continue cultivating friendships, cultural contacts and networks with other artists from various Hispanic countries. With time, these “encounters” motivated what is now known as the Hispanic-American Visual Artists Project. Photo 5: Poster designed and printed by Félix Berroa ( Silkscreen, 22 x 30. 1981) for the exhibition from a workshop ditacted by him in June, 1981, titled “Experimentacion Plasticas”. Santo Domingo, DR. Artists in the workshop: Manuel de J. Guerrero, Elena Rosario, Julio Encarnación, Juan King Mota, Hilario Olivo, José Ramón Medina, Leonida Radhamés Mejía, Segundo Marte, Gabino Rosario, Eddy García, Gilberto Valoy, Rafaela Miledy Pérez, Maritza Pérez, José A. Ceballo, Hector Canario, Marcial Mota, Hidalliza Alcántara, José Santiago Gómez and Martínez Castano.

Photo 13: “Awakening Mind Project”. Acrylic on canvas. 48 x 48 inches. 2009. Painting inspired in the idea of the ​​ artistic group of the same name, in Marietta, Georgia. Photo 14: From left to right: The initial “Awakening Mind Project”: Corey Barsdale, Shijun Huang Munns, Félix Berroa, Marga Gabarret Debbaudt, Omaira Berroa (Felix’s wife), and José Peña. The “Awakening Mind Project” was originally envisioned by Félix Berroa to encompass three Hispanic American artists, three Americans, three African Americans, and one Asian, to make a total of ten. However, the group became inadvertently enriched with Hispanics, which led Félix Berroa to return to an old idea conceived in Puerto Rico back in the 1980 (by two ladies, a Puerto Rican a Cuban and himself), of forming a Caribbean cultural alliance encompassing Puerto Rico, Cuba, and Dominican Republic, but this time with a wider scope to include Hispanic American artists living in the USA mainland. This was how the “Hispanic American Visual Artists Project” was born.

Lobby of Bank of America

The Jacqueline Casey Hudgens Center for the Arts

Photo 30:.The building of the Bank of America Plaza (dark building in the center). Atlanta, Georgia. 2011. Photo 31: A view of the Jacqueline Casey Hudgens Center for the Arts. On the right, the Performing Arts Center facilities.. Duluth, Georgia. USA

Participating artists and their works

Born in Haiti, lives and works in Perú 53