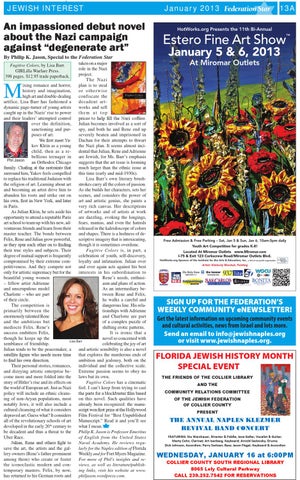 An impassioned debut novel about the Nazi campaign against “degenerate art” By Philip K. Jason, Special to the Federation Star taken on a major role in the Nazi project. The Nazi ixing romance and horror, plan is to steal history and imagination, or otherwise high art and double-dealing confiscate the artifice, Lisa Barr has fashioned a decadent artdynamic page-turner of young artists works and sell caught up in the Nazis’ rise to power them at top and their leaders’ attempted control prices to help fill the Nazi coffers. over the definition, Julian becomes involved as a sort of sanctioning and purspy, and both he and Rene end up poses of art. severely beaten and imprisoned in We first meet YaDachau for their attempts to thwart kov Klein as a young the Nazi plan. It seems almost incichild, then as a redental that Julian, Rene and Adrienne bellious teenager in are Jewish, for Ms. Barr’s emphasis Phil Jason an Orthodox Chicago suggests that the art issue is looming family. Chafing at the restraints that much larger than the ethnic issue at surround him, Yakov feels compelled this time (early and mid-1930s). to replace his traditional Judaism with Lisa Barr’s own literary brushthe religion of art. Learning about art strokes carry all the colors of passion. and becoming an artist drive him to As she builds her characters, sets her abandon his roots and strike out on scenes, and considers the power of his own, first in New York, and later art and artistic genius, she paints a in Paris. very rich canvas. Her descriptions As Julian Klein, he sets aside his of artworks and of artists at work opportunity to attend a reputable Paris are dazzling, evoking the longings, art school to team up with his new, adfears, manias, and even the hatreds venturous friends and learn from their released in the kaleidoscope of colors master teacher. The bonds between and shapes. There is a lushness of deFelix, Rene and Julian grow powerful, scriptive imagery that is intoxicating, as they spur each other on to finding though it is sometimes overdone. their true styles and subjects. Their Fugitive Colors is, in part, a degree of mutual support is frequently celebration of youth, self-discovery, compromised by their extreme comloyalty and infatuation. Julian over petitiveness. And they compete not and over again acts against his best only for artistic supremacy but for the interests in his subordination to beautiful young women Rene’s needs, enthusi– fellow artist Adrienne asm and plans of action. and unscrupulous model As an intermediary beCharlotte – who are part tween Rene and Felix, of their circle. he walks a careful and The competition is dangerous line. His relaprimarily between the tionships with Adrienne enormously talented Rene and Charlotte are part and the ambitious but of a complex puzzle of mediocre Felix. Rene’s shifting erotic patterns. success embitters Felix, It is ironic that a though he keeps up the novel so concerned with Lisa Barr semblance of friendship. celebrating the joy of art Julian tends to be the peacemaker, a and artistic sensibility is also a novel satellite figure who needs more time that explores the murderous ends of to find his own direction. ambition and jealousy, both on the Their personal stories, romances, individual and the collective scale. and dizzying artistic enterprise beExtreme passion seems to obey no come more and more folded into the laws but its own. story of Hitler’s rise and its effects on Fugitive Colors has a cinematic the world of European art. Just as Nazi feel. I can’t keep from trying to cast policy will include an ethnic cleansthe parts for a blockbuster film based ing of non-Aryan populations, most on this novel. Such qualities have notably Jews, it will also include a already been recognized: the manucultural cleansing of what it considers script won first prize at the Hollywood depraved art. Guess what? It considers Film Festival for “Best Unpublished all of the revolutionary schools of art Manuscript.” Read it and you’ll see developed in the early 20th century to what I mean. be decadent and thus a threat to the Philip K. Jason is Professor Emeritus Uber Race. of English from the United States Julian, Rene and others fight to Naval Academy. He reviews regusave the art, the artists and the gallarly for the Naples edition of Florida lery owners (Rene’s father prominent Weekly and for Fort Myers Magazine. among them) who create or foster For more of Phil’s insights and rethe iconoclastic modern and conviews, as well as literature/publishtemporary masters. Felix, by now, ing links, visit his website at www. has returned to his German roots and philjason.wordpress.com. Fugitive Colors, by Lisa Barr. GIRLilla Warfare Press. 398 pages. $12.95 trade paperback.

SIGN UP FOR THE FEDERATION’S WEEKLY COMMUNITY eNEWSLETTER! Get the latest information on upcoming community events and cultural activities, news from Israel and lots more. Send an email to info@jewishnaples.org or visit www.jewishnaples.org. 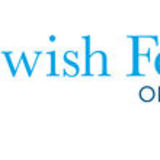 Monthly publication of the Jewish Federation of Collier County

Monthly publication of the Jewish Federation of Collier County