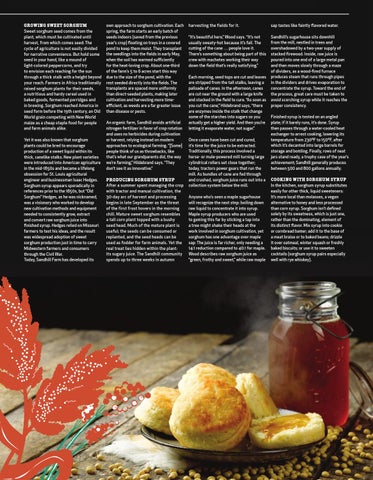 GrowinG Sweet SorGhum Sweet sorghum seed comes from the plant, which must be cultivated until harvest, from which comes seed: The cycle of agriculture is not easily divided for narrative convenience. But hold some seed in your hand, like a mound of light-colored peppercorns, and try to envision each reaching for the sun through a thick stalk with a height beyond your reach. Farmers in Africa traditionally raised sorghum plants for their seeds, a nutritious and hardy cereal used in baked goods, fermented porridges and in brewing. Sorghum reached America in seed form before the 19th century, an Old World grain competing with New World maize as a cheap staple food for people and farm animals alike. Yet it was also known that sorghum plants could be bred to encourage production of a sweet liquid within its thick, canelike stalks. New plant varieties were introduced into American agriculture in the mid-1850s and became a lifelong obsession for St. Louis agricultural engineer and businessman Isaac Hedges. Sorghum syrup appears sporadically in references prior to the 1850s, but “Old Sorghum” Hedges, as he was nicknamed, was a visionary who worked to develop new cultivation methods and equipment needed to consistently grow, extract and convert raw sorghum juice into finished syrup. Hedges relied on Missouri farmers to test his ideas, and the result was widespread adoption of sweet sorghum production just in time to carry Midwestern farmers and consumers through the Civil War. Today, Sandhill Farm has developed its

own approach to sorghum cultivation. Each spring, the farm starts an early batch of seeds indoors (saved from the previous year’s crop) floating on trays in a covered pond to keep them moist. They transplant the seedlings into the fields in early May, when the soil has warmed sufficiently for the heat-loving crop. About one-third of the farm’s 5 to 6 acres start this way due to the size of the pond, with the rest seeded directly into the fields. The transplants are spaced more uniformly than direct-seeded plants, making later cultivation and harvesting more timeefficient, as weeds are a far greater issue than disease or pests. An organic farm, Sandhill avoids artificial nitrogen fertilizer in favor of crop rotation and uses no herbicides during cultivation or harvest, relying instead on modern approaches to ecological farming. “[Some] people think of us as throwbacks, like that’s what our grandparents did, the way we’re farming,” Hildebrand says. “They don’t see it as innovative.” ProducinG SorGhum SyruP After a summer spent managing the crop with tractor and manual cultivation, the 30-day arc of harvest and processing begins in late September as the threat of the first frost hovers in the morning chill. Mature sweet sorghum resembles a tall corn plant topped with a bushy seed head. Much of the mature plant is useful; the seeds can be consumed or replanted, and the seed heads can be used as fodder for farm animals. Yet the real treat lies hidden within the plant: its sugary juice. The Sandhill community spends up to three weeks in autumn

harvesting the fields for it.

“It’s beautiful here,” Wood says. “It’s not usually sweaty-hot because it’s fall. The cutting of the cane … people love it. There’s something about being part of this crew with machetes working their way down the field that’s really satisfying.”

Sandhill’s sugarhouse sits downhill from the mill, nestled in trees and overshadowed by a two-year supply of stacked firewood. Inside, raw juice is poured into one end of a large metal pan and then moves slowly through a maze of dividers, as a wood-fired furnace produces steam that runs through pipes in the dividers and drives evaporation to concentrate the syrup. Toward the end of the process, great care must be taken to avoid scorching syrup while it reaches the proper consistency.

Each morning, seed tops are cut and leaves are stripped from the tall stalks, leaving a palisade of canes. In the afternoon, canes are cut near the ground with a large knife and stacked in the field to cure. “As soon as you cut the cane,” Hildebrand says, “there are enzymes inside the stalk that change some of the starches into sugars so you actually get a higher yield. And then you’re letting it evaporate water, not sugar.” Once canes have been cut and cured, it’s time for the juice to be extracted. Traditionally, this process involved a horse- or mule-powered mill turning large cylindrical rollers set close together; today, tractors power gears that run the mill. As bundles of cane are fed through and crushed, sorghum juice runs out into a collection system below the mill. Anyone who’s seen a maple sugarhouse will recognize the next step: boiling down raw liquid to concentrate it into syrup. Maple syrup producers who are used to getting this far by sticking a tap into a tree might shake their heads at the work involved in sorghum cultivation, yet sorghum has one advantage over maple sap: The juice is far richer, only needing a 14:1 reduction compared to 40:1 for maple. Wood describes raw sorghum juice as “green, frothy and sweet,” while raw maple

Finished syrup is tested on an angled plate; if it barely runs, it’s done. Syrup then passes through a water-cooled heat exchanger to arrest cooking, lowering its temperature from 230ºF to 150ºF, after which it’s decanted into large barrels for storage and bottling. Finally, rows of neat jars stand ready, a trophy case of the year’s achievement; Sandhill generally produces between 500 and 800 gallons annually. cookinG with SorGhum SyruP In the kitchen, sorghum syrup substitutes easily for other thick, liquid sweeteners: It’s more local than molasses, a vegan alternative to honey and less processed than corn syrup. Sorghum isn’t defined solely by its sweetness, which is just one, rather than the dominating, element of its distinct flavor. Mix syrup into cookie or cornbread batter; add it to the base of a meat braise or to baked beans; drizzle it over oatmeal, winter squash or freshly baked biscuits; or use it to sweeten cocktails (sorghum syrup pairs especially well with rye whiskey). 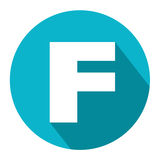 From barbecue to craft beer, the September issue of Feast is a celebration of fall food and drink in the Midwest. In the issue, we share a d...

From barbecue to craft beer, the September issue of Feast is a celebration of fall food and drink in the Midwest. In the issue, we share a d...