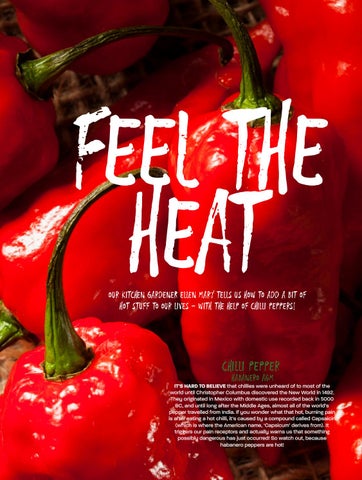 feel the heat Our kitchen gardenER Ellen Mary tells us how to add a bit of hot stuff to our lIVes - with the help of chilli peppers!

IT’S HARD TO BELIEVE that chillies were unheard of to most of the world until Christopher Columbus discovered the New World in 1492. They originated in Mexico with domestic use recorded back in 5000 BC, and until long after the Middle Ages, almost all of the world’s pepper travelled from India. If you wonder what that hot, burning pain is after eating a hot chilli, it’s caused by a compound called Capsaicin (which is where the American name, ‘Capsicum’ derives from). It triggers our pain receptors and actually warns us that something possibly dangerous has just occurred! So watch out, because habanero peppers are hot! Feast Norfolk is a fresh monthly magazine dedicated to the thriving food and drink scene in Norfolk.

Feast Norfolk is a fresh monthly magazine dedicated to the thriving food and drink scene in Norfolk.