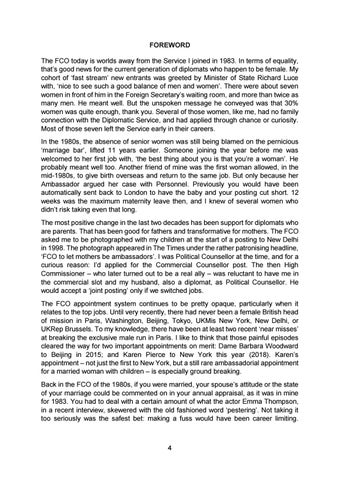 FOREWORD The FCO today is worlds away from the Service I joined in 1983. In terms of equality, that’s good news for the current generation of diplomats who happen to be female. My cohort of ‘fast stream’ new entrants was greeted by Minister of State Richard Luce with, ‘nice to see such a good balance of men and women’. There were about seven women in front of him in the Foreign Secretary’s waiting room, and more than twice as many men. He meant well. But the unspoken message he conveyed was that 30% women was quite enough, thank you. Several of those women, like me, had no family connection with the Diplomatic Service, and had applied through chance or curiosity. Most of those seven left the Service early in their careers. In the 1980s, the absence of senior women was still being blamed on the pernicious ‘marriage bar’, lifted 11 years earlier. Someone joining the year before me was welcomed to her first job with, ‘the best thing about you is that you’re a woman’. He probably meant well too. Another friend of mine was the first woman allowed, in the mid-1980s, to give birth overseas and return to the same job. But only because her Ambassador argued her case with Personnel. Previously you would have been automatically sent back to London to have the baby and your posting cut short. 12 weeks was the maximum maternity leave then, and I knew of several women who didn’t risk taking even that long. The most positive change in the last two decades has been support for diplomats who are parents. That has been good for fathers and transformative for mothers. The FCO asked me to be photographed with my children at the start of a posting to New Delhi in 1998. The photograph appeared in The Times under the rather patronising headline, ‘FCO to let mothers be ambassadors’. I was Political Counsellor at the time, and for a curious reason: I’d applied for the Commercial Counsellor post. The then High Commissioner – who later turned out to be a real ally – was reluctant to have me in the commercial slot and my husband, also a diplomat, as Political Counsellor. He would accept a ‘joint posting’ only if we switched jobs. The FCO appointment system continues to be pretty opaque, particularly when it relates to the top jobs. Until very recently, there had never been a female British head of mission in Paris, Washington, Beijing, Tokyo, UKMis New York, New Delhi, or UKRep Brussels. To my knowledge, there have been at least two recent ‘near misses’ at breaking the exclusive male run in Paris. I like to think that those painful episodes cleared the way for two important appointments on merit: Dame Barbara Woodward to Beijing in 2015; and Karen Pierce to New York this year (2018). Karen’s appointment – not just the first to New York, but a still rare ambassadorial appointment for a married woman with children – is especially ground breaking. Back in the FCO of the 1980s, if you were married, your spouse’s attitude or the state of your marriage could be commented on in your annual appraisal, as it was in mine for 1983. You had to deal with a certain amount of what the actor Emma Thompson, in a recent interview, skewered with the old fashioned word ‘pestering’. Not taking it too seriously was the safest bet: making a fuss would have been career limiting. 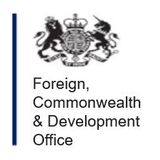 Women and the Foreign Office

This updated version of a previous 'History Note' tells the story of women in British diplomacy from the Foreign Office's formation in 1782...

Women and the Foreign Office

This updated version of a previous 'History Note' tells the story of women in British diplomacy from the Foreign Office's formation in 1782...