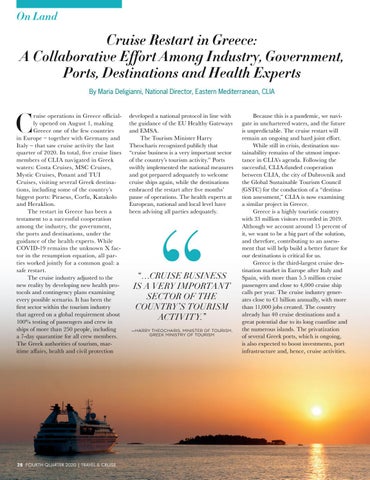 ruise operations in Greece officially opened on August 1, making Greece one of the few countries in Europe – together with Germany and Italy – that saw cruise activity the last quarter of 2020. In total, five cruise lines members of CLIA navigated in Greek waters: Costa Cruises, MSC Cruises, Mystic Cruises, Ponant and TUI Cruises, visiting several Greek destinations, including some of the country’s biggest ports: Piraeus, Corfu, Katakolo and Heraklion. The restart in Greece has been a testament to a successful cooperation among the industry, the government, the ports and destinations, under the guidance of the health experts. While COVID-19 remains the unknown X factor in the resumption equation, all parties worked jointly for a common goal: a safe restart. The cruise industry adjusted to the new reality by developing new health protocols and contingency plans examining every possible scenario. It has been the first sector within the tourism industry that agreed on a global requirement about 100% testing of passengers and crew in ships of more than 250 people, including a 7-day quarantine for all crew members. The Greek authorities of tourism, maritime affairs, health and civil protection

developed a national protocol in line with the guidance of the EU Healthy Gateways and EMSA. The Tourism Minister Harry Theocharis recognized publicly that “cruise business is a very important sector of the country’s tourism activity.” Ports swiftly implemented the national measures and got prepared adequately to welcome cruise ships again, while the destinations embraced the restart after five months’ pause of operations. The health experts at European, national and local level have been advising all parties adequately.

Because this is a pandemic, we navigate in unchartered waters, and the future is unpredictable. The cruise restart will remain an ongoing and hard joint effort. While still in crisis, destination sustainability remains of the utmost importance in CLIA’s agenda. Following the successful, CLIA-funded cooperation between CLIA, the city of Dubrovnik and the Global Sustainable Tourism Council (GSTC) for the conduction of a “destination assessment,” CLIA is now examining a similar project in Greece. Greece is a highly touristic country with 33 million visitors recorded in 2019. Although we account around 15 percent of it, we want to be a big part of the solution, and therefore, contributing to an assessment that will help build a better future for our destinations is critical for us. Greece is the third-largest cruise destination market in Europe after Italy and Spain, with more than 5.5 million cruise passengers and close to 4,000 cruise ship calls per year. The cruise industry generates close to €1 billion annually, with more than 11,000 jobs created. The country already has 40 cruise destinations and a great potential due to its long coastline and the numerous islands. The privatization of several Greek ports, which is ongoing, is also expected to boost investments, port infrastructure and, hence, cruise activities.