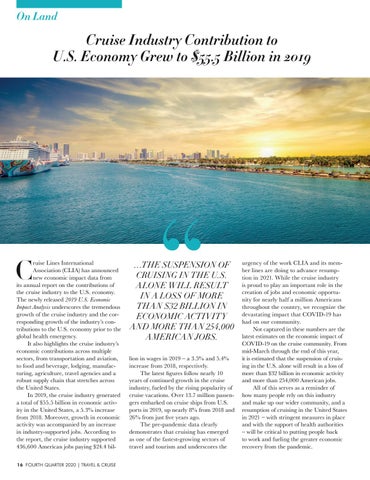 Cruise Industry Contribution to U.S. Economy Grew to $55.5 Billion in 2019

…THE SUSPENSION OF CRUISING IN THE U.S. ALONE WILL RESULT IN A LOSS OF MORE THAN $32 BILLION IN ECONOMIC ACTIVITY AND MORE THAN 254,000 AMERICAN JOBS. lion in wages in 2019 – a 3.5% and 5.4% increase from 2018, respectively. The latest figures follow nearly 10 years of continued growth in the cruise industry, fueled by the rising popularity of cruise vacations. Over 13.7 million passengers embarked on cruise ships from U.S. ports in 2019, up nearly 8% from 2018 and 26% from just five years ago. The pre-pandemic data clearly demonstrates that cruising has emerged as one of the fastest-growing sectors of travel and tourism and underscores the

urgency of the work CLIA and its member lines are doing to advance resumption in 2021. While the cruise industry is proud to play an important role in the creation of jobs and economic opportunity for nearly half a million Americans throughout the country, we recognize the devastating impact that COVID-19 has had on our community. Not captured in these numbers are the latest estimates on the economic impact of COVID-19 on the cruise community. From mid-March through the end of this year, it is estimated that the suspension of cruising in the U.S. alone will result in a loss of more than $32 billion in economic activity and more than 254,000 American jobs. All of this serves as a reminder of how many people rely on this industry and make up our wider community, and a resumption of cruising in the United States in 2021 – with stringent measures in place and with the support of health authorities – will be critical to putting people back to work and fueling the greater economic recovery from the pandemic.