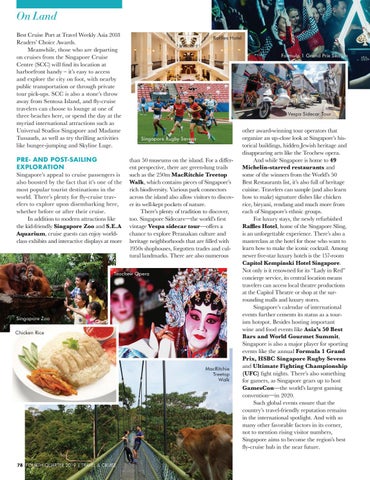 On Land Best Cruise Port at Travel Weekly Asia 2018 Readers’ Choice Awards. Meanwhile, those who are departing on cruises from the Singapore Cruise Centre (SCC) will find its location at harborfront handy – it’s easy to access and explore the city on foot, with nearby public transportation or through private tour pick-ups. SCC is also a stone’s throw away from Sentosa Island, and fly-cruise travelers can choose to lounge at one of three beaches here, or spend the day at the myriad international attractions such as Universal Studios Singapore and Madame Tussauds, as well as try thrilling activities like bungee-jumping and Skyline Luge. PRE- AND POST-SAILING EXPLORATION Singapore’s appeal to cruise passengers is also boosted by the fact that it’s one of the most popular tourist destinations in the world. There’s plenty for fly-cruise travelers to explore upon disembarking here, whether before or after their cruise. In addition to modern attractions like the kid-friendly Singapore Zoo and S.E.A Aquarium, cruise guests can enjoy worldclass exhibits and interactive displays at more

than 50 museums on the island. For a different perspective, there are green-lung trails such as the 250m MacRitchie Treetop Walk, which contains pieces of Singapore’s rich biodiversity. Various park connectors across the island also allow visitors to discover its well-kept pockets of nature. There’s plenty of tradition to discover, too. Singapore Sidecars—the world’s first vintage Vespa sidecar tour—offers a chance to explore Peranakan culture and heritage neighborhoods that are filled with 1950s shophouses, forgotten trades and cultural landmarks. There are also numerous

other award-winning tour operators that organize an up-close look at Singapore’s historical buildings, hidden Jewish heritage and disappearing arts like the Teochew opera. And while Singapore is home to 49 Michelin-starred restaurants and some of the winners from the World’s 50 Best Restaurants list, it’s also full of heritage cuisine. Travelers can sample (and also learn how to make) signature dishes like chicken rice, biryani, rendang and much more from each of Singapore’s ethnic groups. For luxury stays, the newly refurbished Raffles Hotel, home of the Singapore Sling, is an unforgettable experience. There’s also a masterclass at the hotel for those who want to learn how to make the iconic cocktail. Among newer five-star luxury hotels is the 157-room Capitol Kempinski Hotel Singapore. Not only is it renowned for its “Lady in Red” concierge service, its central location means travelers can access local theatre productions at the Capitol Theatre or shop at the surrounding malls and luxury stores. Singapore’s calendar of international events further cements its status as a tourism hotspot. Besides hosting important wine and food events like Asia’s 50 Best Bars and World Gourmet Summit, Singapore is also a major player for sporting events like the annual Formula 1 Grand Prix, HSBC Singapore Rugby Sevens and Ultimate Fighting Championship (UFC) fight nights. There’s also something for gamers, as Singapore gears up to host GamesCon—the world’s largest gaming convention—in 2020. Such global events ensure that the country’s travel-friendly reputation remains in the international spotlight. And with so many other favorable factors in its corner, not to mention rising visitor numbers, Singapore aims to become the region’s best fly-cruise hub in the near future.