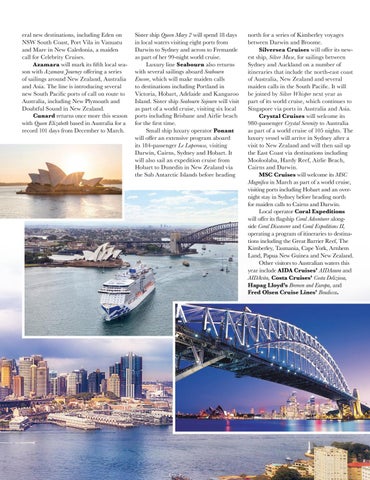 eral new destinations, including Eden on NSW South Coast, Port Vila in Vanuatu and Mare in New Caledonia, a maiden call for Celebrity Cruises. Azamara will mark its fifth local season with Azamara Journey offering a series of sailings around New Zealand, Australia and Asia. The line is introducing several new South Pacific ports of call on route to Australia, including New Plymouth and Doubtful Sound in New Zealand. Cunard returns once more this season with Queen Elizabeth based in Australia for a record 101 days from December to March.

Sister ship Queen Mary 2 will spend 18 days in local waters visiting eight ports from Darwin to Sydney and across to Fremantle as part of her 99-night world cruise. Luxury line Seabourn also returns with several sailings aboard Seabourn Encore, which will make maiden calls to destinations including Portland in Victoria, Hobart, Adelaide and Kangaroo Island. Sister ship Seabourn Sojourn will visit as part of a world cruise, visiting six local ports including Brisbane and Airlie beach for the first time. Small ship luxury operator Ponant will offer an extensive program aboard its 184-passenger Le Laperouse, visiting Darwin, Cairns, Sydney and Hobart. It will also sail an expedition cruise from Hobart to Dunedin in New Zealand via the Sub Antarctic Islands before heading

north for a series of Kimberley voyages between Darwin and Broome. Silversea Cruises will offer its newest ship, Silver Muse, for sailings between Sydney and Auckland on a number of itineraries that include the north-east coast of Australia, New Zealand and several maiden calls in the South Pacific. It will be joined by Silver Whisper next year as part of its world cruise, which continues to Singapore via ports in Australia and Asia. Crystal Cruises will welcome its 980-passenger Crystal Serenity to Australia as part of a world cruise of 105 nights. The luxury vessel will arrive in Sydney after a visit to New Zealand and will then sail up the East Coast via destinations including Mooloolaba, Hardy Reef, Airlie Beach, Cairns and Darwin. MSC Cruises will welcome its MSC Magnifica in March as part of a world cruise, visiting ports including Hobart and an overnight stay in Sydney before heading north for maiden calls to Cairns and Darwin. Local operator Coral Expeditions will offer its flagship Coral Adventurer alongside Coral Discoverer and Coral Expeditions II, operating a program of itineraries to destinations including the Great Barrier Reef, The Kimberley, Tasmania, Cape York, Arnhem Land, Papua New Guinea and New Zealand. Other visitors to Australian waters this year include AIDA Cruises’ AIDAaura and AIDAvita, Costa Cruises’ Costa Deliziosa, Hapag Lloyd’s Bremen and Europa, and Fred Olsen Cruise Lines’ Boudicca.