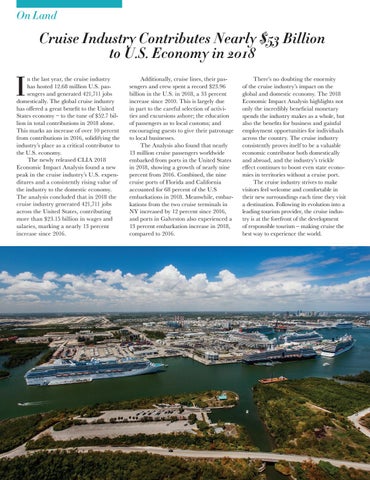 n the last year, the cruise industry has hosted 12.68 million U.S. passengers and generated 421,711 jobs domestically. The global cruise industry has offered a great benefit to the United States economy – to the tune of $52.7 billion in total contributions in 2018 alone. This marks an increase of over 10 percent from contributions in 2016, solidifying the industry’s place as a critical contributor to the U.S. economy. The newly released CLIA 2018 Economic Impact Analysis found a new peak in the cruise industry’s U.S. expenditures and a consistently rising value of the industry to the domestic economy. The analysis concluded that in 2018 the cruise industry generated 421,711 jobs across the United States, contributing more than $23.15 billion in wages and salaries, marking a nearly 13 percent increase since 2016.

Additionally, cruise lines, their passengers and crew spent a record $23.96 billion in the U.S. in 2018, a 33 percent increase since 2010. This is largely due in part to the careful selection of activities and excursions ashore; the education of passengers as to local customs; and encouraging guests to give their patronage to local businesses. The Analysis also found that nearly 13 million cruise passengers worldwide embarked from ports in the United States in 2018, showing a growth of nearly nine percent from 2016. Combined, the nine cruise ports of Florida and California accounted for 68 percent of the U.S embarkations in 2018. Meanwhile, embarkations from the two cruise terminals in NY increased by 12 percent since 2016, and ports in Galveston also experienced a 13 percent embarkation increase in 2018, compared to 2016.

There’s no doubting the enormity of the cruise industry’s impact on the global and domestic economy. The 2018 Economic Impact Analysis highlights not only the incredibly beneficial monetary spends the industry makes as a whole, but also the benefits for business and gainful employment opportunities for individuals across the country. The cruise industry consistently proves itself to be a valuable economic contributor both domestically and abroad, and the industry’s trickle effect continues to boost even state economies in territories without a cruise port. The cruise industry strives to make visitors feel welcome and comfortable in their new surroundings each time they visit a destination. Following its evolution into a leading tourism provider, the cruise industry is at the forefront of the development of responsible tourism – making cruise the best way to experience the world.