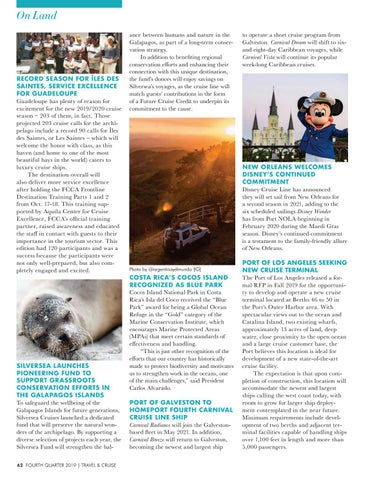 RECORD SEASON FOR ÎLES DES SAINTES, SERVICE EXCELLENCE FOR GUADELOUPE Guadeloupe has plenty of reason for excitement for the new 2019/2020 cruise season – 203 of them, in fact. Those projected 203 cruise calls for the archipelago include a record 90 calls for Îles des Saintes, or Les Saintes – which will welcome the honor with class, as this haven (and home to one of the most beautiful bays in the world) caters to luxury cruise ships. The destination overall will also deliver more service excellence after holding the FCCA Frontline Destination Training Parts 1 and 2 from Oct. 17-18. This training supported by Aquila Center for Cruise Excellence, FCCA’s official training partner, raised awareness and educated the staff in contact with guests to their importance in the tourism sector. This edition had 120 participants and was a success because the participants were not only well-prepared, but also completely engaged and excited.

SILVERSEA LAUNCHES PIONEERING FUND TO SUPPORT GRASSROOTS CONSERVATION EFFORTS IN THE GALAPAGOS ISLANDS To safeguard the wellbeing of the Galapagos Islands for future generations, Silversea Cruises launched a dedicated fund that will preserve the natural wonders of the archipelago. By supporting a diverse selection of projects each year, the Silversea Fund will strengthen the bal62 FOURTH QUARTER 2019 | TRAVEL & CRUISE

ance between humans and nature in the Galapagos, as part of a long-term conservation strategy. In addition to benefiting regional conservation efforts and enhancing their connection with this unique destination, the fund’s donors will enjoy savings on Silversea’s voyages, as the cruise line will match guests’ contributions in the form of a Future Cruise Credit to underpin its commitment to the cause.

NEW ORLEANS WELCOMES DISNEY’S CONTINUED COMMITMENT Disney Cruise Line has announced they will set sail from New Orleans for a second season in 2021, adding to the six scheduled sailings Disney Wonder has from Port NOLA beginning in February 2020 during the Mardi Gras season. Disney’s continued commitment is a testament to the family-friendly allure of New Orleans.  Photo by @argentinayelmundo [IG]

COSTA RICA’S COCOS ISLAND RECOGNIZED AS BLUE PARK Cocos Island National Park in Costa Rica’s Isla del Coco received the “Blue Park” award for being a Global Ocean Refuge in the “Gold” category of the Marine Conservation Institute, which encourages Marine Protected Areas (MPAs) that meet certain standards of effectiveness and handling. “This is just other recognition of the efforts that our country has historically made to protect biodiversity and motivates us to strengthen work in the oceans, one of the main challenges,” said President Carlos Alvarado. PORT OF GALVESTON TO HOMEPORT FOURTH CARNIVAL CRUISE LINE SHIP Carnival Radiance will join the Galvestonbased fleet in May 2021. In addition, Carnival Breeze will return to Galveston, becoming the newest and largest ship

PORT OF LOS ANGELES SEEKING NEW CRUISE TERMINAL The Port of Los Angeles released a formal RFP in Fall 2019 for the opportunity to develop and operate a new cruise terminal located at Berths 46 to 50 in the Port’s Outer Harbor area. With spectacular views out to the ocean and Catalina Island, two existing wharfs, approximately 13 acres of land, deep water, close proximity to the open ocean and a large cruise customer base, the Port believes this location is ideal for development of a new state-of-the-art cruise facility. The expectation is that upon completion of construction, this location will accommodate the newest and largest ships calling the west coast today, with room to grow for larger ship deployment contemplated in the near future. Minimum requirements include development of two berths and adjacent terminal facilities capable of handling ships over 1,100 feet in length and more than 5,000 passengers.