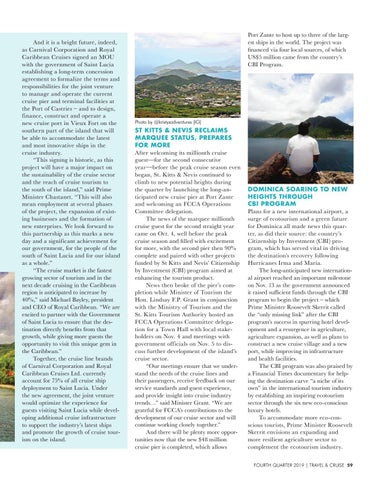 And it is a bright future, indeed, as Carnival Corporation and Royal Caribbean Cruises signed an MOU with the government of Saint Lucia establishing a long-term concession agreement to formalize the terms and responsibilities for the joint venture to manage and operate the current cruise pier and terminal facilities at the Port of Castries – and to design, finance, construct and operate a new cruise port in Vieux Fort on the southern part of the island that will be able to accommodate the latest and most innovative ships in the cruise industry. “This signing is historic, as this project will have a major impact on the sustainability of the cruise sector and the reach of cruise tourism to the south of the island,” said Prime Minister Chastanet. “This will also mean employment at several phases of the project, the expansion of existing businesses and the formation of new enterprises. We look forward to this partnership as this marks a new day and a significant achievement for our government, for the people of the south of Saint Lucia and for our island as a whole.” “The cruise market is the fastest growing sector of tourism and in the next decade cruising in the Caribbean region is anticipated to increase by 40%,” said Michael Bayley, president and CEO of Royal Caribbean. “We are excited to partner with the Government of Saint Lucia to ensure that the destination directly benefits from that growth, while giving more guests the opportunity to visit this unique gem in the Caribbean.” Together, the cruise line brands of Carnival Corporation and Royal Caribbean Cruises Ltd. currently account for 75% of all cruise ship deployment to Saint Lucia. Under the new agreement, the joint venture would optimize the experience for guests visiting Saint Lucia while developing additional cruise infrastructure to support the industry’s latest ships and promote the growth of cruise tourism on the island.

Port Zante to host up to three of the largest ships in the world. The project was financed via four local sources, of which US$5 million came from the country’s CBI Program.

ST KITTS & NEVIS RECLAIMS MARQUEE STATUS, PREPARES FOR MORE After welcoming its millionth cruise guest—for the second consecutive year—before the peak cruise season even began, St. Kitts & Nevis continued to climb to new potential heights during the quarter by launching the long-anticipated new cruise pier at Port Zante and welcoming an FCCA Operations Committee delegation. The news of the marquee millionth cruise guest for the second straight year came on Oct. 4, well before the peak cruise season and filled with excitement for more, with the second pier then 90% complete and paired with other projects funded by St Kitts and Nevis’ Citizenship by Investment (CBI) program aimed at enhancing the tourism product. News then broke of the pier’s completion while Minister of Tourism the Hon. Lindsay F.P. Grant in conjunction with the Ministry of Tourism and the St. Kitts Tourism Authority hosted an FCCA Operations Committee delegation for a Town Hall with local stakeholders on Nov. 4 and meetings with government officials on Nov. 5 to discuss further development of the island’s cruise sector. “Our meetings ensure that we understand the needs of the cruise lines and their passengers, receive feedback on our service standards and guest experience, and provide insight into cruise industry trends…” said Minister Grant. “We are grateful for FCCA’s contributions to the development of our cruise sector and will continue working closely together.” And there will be plenty more opportunities now that the new $48 million cruise pier is completed, which allows

DOMINICA SOARING TO NEW HEIGHTS THROUGH CBI PROGRAM Plans for a new international airport, a surge of ecotourism and a green future for Dominica all made news this quarter, as did their source: the country’s Citizenship by Investment (CBI) program, which has served vital in driving the destination’s recovery following Hurricanes Irma and Maria. The long-anticipated new international airport reached an important milestone on Nov. 13 as the government announced it raised sufficient funds through the CBI program to begin the project – which Prime Minister Roosevelt Skerrit called the “only missing link” after the CBI program’s success in spurring hotel development and a resurgence in agriculture, agriculture expansion, as well as plans to construct a new cruise village and a new port, while improving in infrastructure and health facilities. The CBI program was also praised by a Financial Times documentary for helping the destination carve “a niche of its own” in the international tourism industry by establishing an inspiring ecotourism sector through the six new eco-conscious luxury hotels. To accommodate more eco-conscious tourists, Prime Minister Roosevelt Skerrit envisions an expanding and more resilient agriculture sector to complement the ecotourism industry. FOURTH QUARTER 2019 | TRAVEL & CRUISE 59