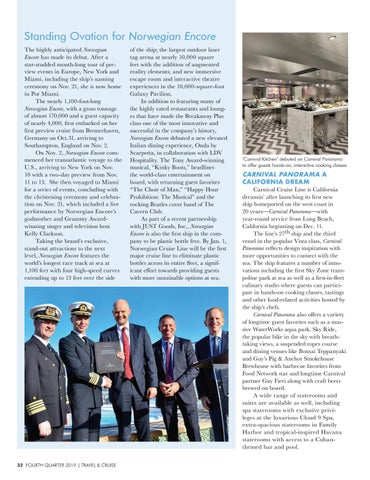 Standing Ovation for Norwegian Encore The highly anticipated Norwegian Encore has made its debut. After a star-studded month-long tour of preview events in Europe, New York and Miami, including the ship’s naming ceremony on Nov. 21, she is now home in Por Miami. The nearly 1,100-foot-long Norwegian Encore, with a gross tonnage of almost 170,000 and a guest capacity of nearly 4,000, first embarked on her first preview cruise from Bremerhaven, Germany on Oct.31, arriving to Southampton, England on Nov. 2. On Nov. 2, Norwegian Encore commenced her transatlantic voyage to the U.S., arriving to New York on Nov. 10 with a two-day preview from Nov. 11 to 13. She then voyaged to Miami for a series of events, concluding with the christening ceremony and celebration on Nov. 21, which included a live performance by Norwegian Encore’s godmother and Grammy Awardwinning singer and television host Kelly Clarkson. Taking the brand’s exclusive, stand-out attractions to the next level, Norwegian Encore features the world’s longest race track at sea at 1,100 feet with four high-speed curves extending up to 13 feet over the side

of the ship; the largest outdoor laser tag arena at nearly 10,000 square feet with the addition of augmented reality elements; and new immersive escape room and interactive theatre experiences in the 10,000-square-foot Galaxy Pavilion. In addition to featuring many of the highly rated restaurants and lounges that have made the Breakaway Plus class one of the most innovative and successful in the company’s history, Norwegian Encore debuted a new elevated Italian dining experience, Onda by Scarpetta, in collaboration with LDV Hospitality. The Tony Award-winning musical, “Kinky Boots,” headlines the world-class entertainment on board, with returning guest favorites “The Choir of Man,” “Happy Hour Prohibition: The Musical” and the rocking Beatles cover band of The Cavern Club. As part of a recent partnership with JUST Goods, Inc., Norwegian Encore is also the first ship in the company to be plastic bottle free. By Jan. 1, Norwegian Cruise Line will be the first major cruise line to eliminate plastic bottles across its entire fleet, a significant effort towards providing guests with more sustainable options at sea.

CARNIVAL PANORAMA A CALIFORNIA DREAM Carnival Cruise Line is California dreamin’ after launching its first new ship homeported on the west coast in 20 years—Carnival Panorama—with year-round service from Long Beach, California beginning on Dec. 11. The line’s 27th ship and the third vessel in the popular Vista class, Carnival Panorama reflects design inspiration with more opportunities to connect with the sea. The ship features a number of innovations including the first Sky Zone trampoline park at sea as well as a first-in-fleet culinary studio where guests can participate in hands-on cooking classes, tastings and other food-related activities hosted by the ship’s chefs. Carnival Panorama also offers a variety of longtime guest favorites such as a massive WaterWorks aqua park, Sky Ride, the popular bike in the sky with breathtaking views, a suspended ropes course and dining venues like Bonsai Teppanyaki and Guy’s Pig & Anchor Smokehouse Brewhouse with barbecue favorites from Food Network star and longtime Carnival partner Guy Fieri along with craft beers brewed on board. A wide range of staterooms and suites are available as well, including spa staterooms with exclusive privileges at the luxurious Cloud 9 Spa, extra-spacious staterooms in Family Harbor and tropical-inspired Havana staterooms with access to a Cubanthemed bar and pool.