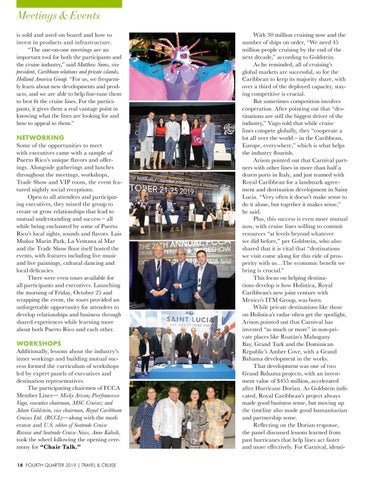 Meetings & Events is sold and used on board and how to invest in products and infrastructure. “The one-on-one meetings are an important tool for both the participants and the cruise industry,” said Matthew Sams, vice president, Caribbean relations and private islands, Holland America Group. “For us, we frequently learn about new developments and products, and we are able to help fine-tune them to best fit the cruise lines. For the participants, it gives them a real vantage point in knowing what the lines are looking for and how to appeal to them.” NETWORKING Some of the opportunities to meet with executives came with a sample of Puerto Rico’s unique flavors and offerings. Alongside gatherings and lunches throughout the meetings, workshops, Trade Show and VIP room, the event featured nightly social receptions. Open to all attendees and participating executives, they mixed the group to create or grow relationships that lead to mutual understanding and success – all while being enchanted by some of Puerto Rico’s local sights, sounds and flavors. Luis Muñoz Marin Park, La Ventana al Mar and the Trade Show floor itself hosted the events, with features including live music and live paintings, cultural dancing and local delicacies. There were even tours available for all participants and executives. Launching the morning of Friday, October 25 and wrapping the event, the tours provided an unforgettable opportunity for attendees to develop relationships and business through shared experiences while learning more about both Puerto Rico and each other. WORKSHOPS Additionally, lessons about the industry’s inner workings and building mutual success formed the curriculum of workshops led by expert panels of executives and destination representatives. The participating chairmen of FCCA Member Lines— Micky Arison; Pierfrancesco Vago, executive chairman, MSC Cruises; and Adam Goldstein, vice chairman, Royal Caribbean Cruises Ltd. (RCCL)—along with the moderator and U.S. editor of Seatrade Cruise Review and Seatrade Cruise News, Anne Kalosh, took the wheel following the opening ceremony for “Chair Talk.” 18 FOURTH QUARTER 2019 | TRAVEL & CRUISE

With 30 million cruising now and the number of ships on order, “We need 45 million people cruising by the end of the next decade,” according to Goldstein. As he reminded, all of cruising’s global markets are successful, so for the Caribbean to keep its majority share, with over a third of the deployed capacity, staying competitive is crucial. But sometimes competition involves cooperation. After pointing out that “destinations are still the biggest driver of the industry,” Vago told that while cruise lines compete globally, they “cooperate a lot all over the world – in the Caribbean, Europe, everywhere,” which is what helps the industry flourish. Arison pointed out that Carnival partners with other lines in more than half a dozen ports in Italy, and just teamed with Royal Caribbean for a landmark agreement and destination development in Saint Lucia. “Very often it doesn’t make sense to do it alone, but together it makes sense,” he said. Plus, this success is even more mutual now, with cruise lines willing to commit resources “at levels beyond whatever we did before,” per Goldstein, who also shared that it is vital that “destinations we visit come along for this ride of prosperity with us…The economic benefit we bring is crucial.” This focus on helping destinations develop is how Holistica, Royal Caribbean’s new joint venture with Mexico’s ITM Group, was born. While private destinations like those on Holistica’s radar often get the spotlight, Arison pointed out that Carnival has invested “as much or more” in non-private places like Roatán’s Mahogany Bay, Grand Turk and the Dominican Republic’s Amber Cove, with a Grand Bahama development in the works. That development was one of two Grand Bahama projects, with an investment value of $455 million, accelerated after Hurricane Dorian. As Goldstein indicated, Royal Caribbean’s project always made good business sense, but moving up the timeline also made good humanitarian and partnership sense. Reflecting on the Dorian response, the panel discussed lessons learned from past hurricanes that help lines act faster and more effectively. For Carnival, identi-