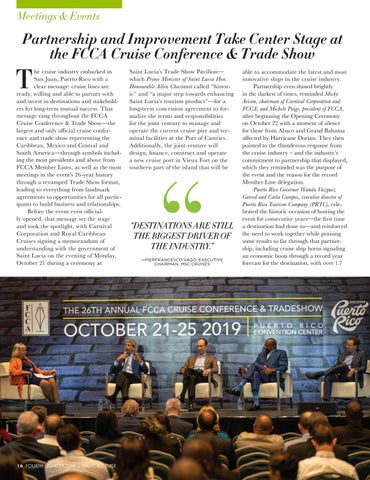 he cruise industry embarked in San Juan, Puerto Rico with a clear message: cruise lines are ready, willing and able to partner with and invest in destinations and stakeholders for long-term mutual success. That message rang throughout the FCCA Cruise Conference & Trade Show—the largest and only official cruise conference and trade show representing the Caribbean, Mexico and Central and South America—through symbols including the most presidents and above from FCCA Member Lines, as well as the most meetings in the event’s 26-year history through a revamped Trade Show format, leading to everything from landmark agreements to opportunities for all participants to build business and relationships. Before the event even officially opened, that message set the stage and took the spotlight, with Carnival Corporation and Royal Caribbean Cruises signing a memorandum of understanding with the government of Saint Lucia on the evening of Monday, October 21 during a ceremony at

Saint Lucia’s Trade Show Pavilion— which Prime Minister of Saint Lucia Hon. Honourable Allen Chastanet called “historic” and “a major step towards enhancing Saint Lucia’s tourism product”—for a long-term concession agreement to formalize the terms and responsibilities for the joint venture to manage and operate the current cruise pier and terminal facilities at the Port of Castries. Additionally, the joint venture will design, finance, construct and operate a new cruise port in Vieux Fort on the southern part of the island that will be

able to accommodate the latest and most innovative ships in the cruise industry. Partnership even shined brightly in the darkest of times, reminded Micky Arison, chairman of Carnival Corporation and FCCA, and Michele Paige, president of FCCA, after beginning the Opening Ceremony on October 22 with a moment of silence for those from Abaco and Grand Bahama affected by Hurricane Dorian. They then pointed to the thunderous response from the cruise industry – and the industry’s commitment to partnership that displayed, which they reminded was the purpose of the event and the reason for the record Member Line delegation. Puerto Rico Governor Wanda Vázquez Garced and Carla Campos, executive director of Puerto Rico Tourism Company (PRTC), celebrated the historic occasion of hosting the event for consecutive years—the first time a destination had done so—and reinforced the need to work together while praising some results so far through that partnership, including cruise ship horns signaling an economic boon through a record year forecast for the destination, with over 1.7