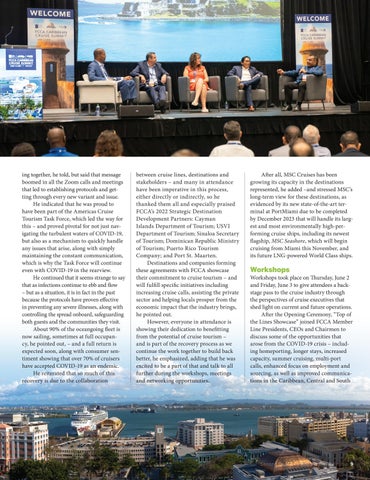 ing together, he told, but said that message boomed in all the Zoom calls and meetings that led to establishing protocols and getting through every new variant and issue. He indicated that he was proud to have been part of the Americas Cruise Tourism Task Force, which led the way for this – and proved pivotal for not just navigating the turbulent waters of COVID-19, but also as a mechanism to quickly handle any issues that arise, along with simply maintaining the constant communication, which is why the Task Force will continue even with COVID-19 in the rearview. He continued that it seems strange to say that as infections continue to ebb and flow – but as a situation, it is in fact in the past because the protocols have proven effective in preventing any severe illnesses, along with controlling the spread onboard, safeguarding both guests and the communities they visit. About 90% of the oceangoing fleet is now sailing, sometimes at full occupancy, he pointed out, – and a full return is expected soon, along with consumer sentiment showing that over 70% of cruisers have accepted COVID-19 as an endemic. He reiterated that so much of this recovery is due to the collaboration

between cruise lines, destinations and stakeholders – and many in attendance have been imperative in this process, either directly or indirectly, so he thanked them all and especially praised FCCA’s 2022 Strategic Destination Development Partners: Cayman Islands Department of Tourism; USVI Department of Tourism; Sinaloa Secretary of Tourism; Dominican Republic Ministry of Tourism; Puerto Rico Tourism Company; and Port St. Maarten. Destinations and companies forming these agreements with FCCA showcase their commitment to cruise tourism – and will fulfill specific initiatives including increasing cruise calls, assisting the private sector and helping locals prosper from the economic impact that the industry brings, he pointed out. However, everyone in attendance is showing their dedication to benefitting from the potential of cruise tourism – and is part of the recovery process as we continue the work together to build back better, he emphasized, adding that he was excited to be a part of that and talk to all further during the workshops, meetings and networking opportunities.

After all, MSC Cruises has been growing its capacity in the destinations represented, he added –and stressed MSC’s long-term view for these destinations, as evidenced by its new state-of-the-art terminal at PortMiami due to be completed by December 2023 that will handle its largest and most environmentally high-performing cruise ships, including its newest flagship, MSC Seashore, which will begin cruising from Miami this November, and its future LNG-powered World Class ships.

Workshops Workshops took place on Thursday, June 2 and Friday, June 3 to give attendees a backstage pass to the cruise industry through the perspectives of cruise executives that shed light on current and future operations. After the Opening Ceremony, “Top of the Lines Showcase” joined FCCA Member Line Presidents, CEOs and Chairmen to discuss some of the opportunities that arose from the COVID-19 crisis – including homeporting, longer stays, increased capacity, summer cruising, multi-port calls, enhanced focus on employment and sourcing, as well as improved communications in the Caribbean, Central and South