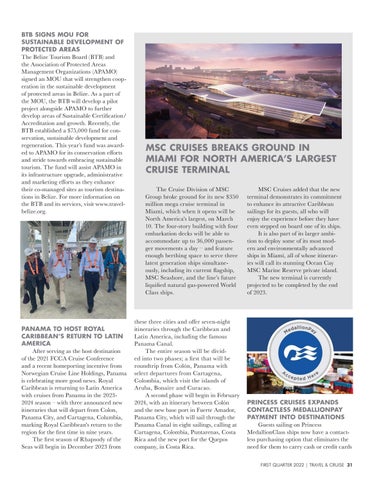 BTB SIGNS MOU FOR SUSTAINABLE DEVELOPMENT OF PROTECTED AREAS The Belize Tourism Board (BTB) and the Association of Protected Areas Management Organizations (APAMO) signed an MOU that will strengthen cooperation in the sustainable development of protected areas in Belize. As a part of the MOU, the BTB will develop a pilot project alongside APAMO to further develop areas of Sustainable Certification/ Accreditation and growth. Recently, the BTB established a $75,000 fund for conservation, sustainable development and regeneration. This year’s fund was awarded to APAMO for its conservation efforts and stride towards embracing sustainable tourism. The fund will assist APAMO in its infrastructure upgrade, administrative and marketing efforts as they enhance their co-managed sites as tourism destinations in Belize. For more information on the BTB and its services, visit www.travelbelize.org.

PANAMA TO HOST ROYAL CARIBBEAN’S RETURN TO LATIN AMERICA After serving as the host destination of the 2021 FCCA Cruise Conference and a recent homeporting incentive from Norwegian Cruise Line Holdings, Panama is celebrating more good news. Royal Caribbean is returning to Latin America with cruises from Panama in the 20232024 season – with three announced new itineraries that will depart from Colon, Panama City, and Cartagena, Columbia, marking Royal Caribbean&#39;s return to the region for the first time in nine years. The first season of Rhapsody of the Seas will begin in December 2023 from

MSC CRUISES BREAKS GROUND IN MIAMI FOR NORTH AMERICA’S LARGEST CRUISE TERMINAL The Cruise Division of MSC Group broke ground for its new $350 million mega cruise terminal in Miami, which when it opens will be North America’s largest, on March 10. The four-story building with four embarkation decks will be able to accommodate up to 36,000 passenger movements a day – and feature enough berthing space to serve three latest generation ships simultaneously, including its current flagship, MSC Seashore, and the line’s future liquified natural gas-powered World Class ships.

these three cities and offer seven-night itineraries through the Caribbean and Latin America, including the famous Panama Canal. The entire season will be divided into two phases; a first that will be roundtrip from Colón, Panama with select departures from Cartagena, Colombia, which visit the islands of Aruba, Bonaire and Curacao. A second phase will begin in February 2024, with an itinerary between Colón and the new base port in Fuerte Amador, Panama City, which will sail through the Panama Canal in eight sailings, calling at Cartagena, Colombia, Puntarenas, Costa Rica and the new port for the Quepos company, in Costa Rica.

MSC Cruises added that the new terminal demonstrates its commitment to enhance its attractive Caribbean sailings for its guests, all who will enjoy the experience before they have even stepped on board one of its ships. It is also part of its larger ambition to deploy some of its most modern and environmentally advanced ships in Miami, all of whose itineraries will call its stunning Ocean Cay MSC Marine Reserve private island. The new terminal is currently projected to be completed by the end of 2023.