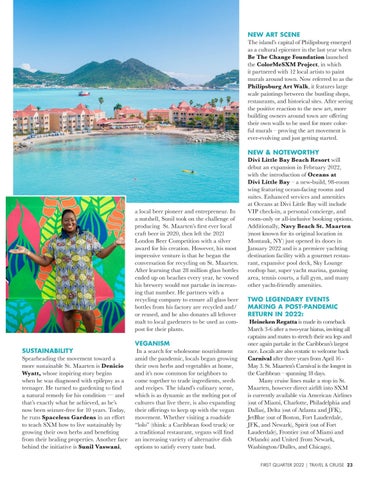 NEW ART SCENE The island’s capital of Philipsburg emerged as a cultural epicenter in the last year when Be The Change Foundation launched the ColorMeSXM Project, in which it partnered with 12 local artists to paint murals around town. Now referred to as the Philipsburg Art Walk, it features large scale paintings between the bustling shops, restaurants, and historical sites. After seeing the positive reaction to the new art, more building owners around town are offering their own walls to be used for more colorful murals – proving the art movement is ever-evolving and just getting started.

a local beer pioneer and entrepreneur. In a nutshell, Sunil took on the challenge of producing St. Maarten’s first ever local craft beer in 2020, then left the 2021 London Beer Competition with a silver award for his creation. However, his most impressive venture is that he began the conversation for recycling on St. Maarten. After learning that 28 million glass bottles ended up on beaches every year, he vowed his brewery would not partake in increasing that number. He partners with a recycling company to ensure all glass beer bottles from his factory are recycled and/ or reused, and he also donates all leftover malt to local gardeners to be used as compost for their plants. SUSTAINABILITY Spearheading the movement toward a more sustainable St. Maarten is Denicio Wyatt, whose inspiring story begins when he was diagnosed with epilepsy as a teenager. He turned to gardening to find a natural remedy for his condition — and that’s exactly what he achieved, as he’s now been seizure-free for 10 years. Today, he runs Spaceless Gardens in an effort to teach SXM how to live sustainably by growing their own herbs and benefiting from their healing properties. Another face behind the initiative is Sunil Vaswani,

VEGANISM In a search for wholesome nourishment amid the pandemic, locals began growing their own herbs and vegetables at home, and it’s now common for neighbors to come together to trade ingredients, seeds and recipes. The island’s culinary scene, which is as dynamic as the melting pot of cultures that live there, is also expanding their offerings to keep up with the vegan movement. Whether visiting a roadside “lolo” (think: a Caribbean food truck) or a traditional restaurant, vegans will find an increasing variety of alternative dish options to satisfy every taste bud.

NEW &amp; NOTEWORTHY Divi Little Bay Beach Resort will debut an expansion in February 2022, with the introduction of Oceans at Divi Little Bay – a new-build, 98-room wing featuring ocean-facing rooms and suites. Enhanced services and amenities at Oceans at Divi Little Bay will include VIP check-in, a personal concierge, and room-only or all-inclusive booking options. Additionally, Navy Beach St. Maarten (most known for its original location in Montauk, NY) just opened its doors in January 2022 and is a premiere yachting destination facility with a gourmet restaurant, expansive pool deck, Sky Lounge rooftop bar, super yacht marina, gaming area, tennis courts, a full gym, and many other yacht-friendly amenities. TWO LEGENDARY EVENTS MAKING A POST-PANDEMIC RETURN IN 2022: Heineken Regatta is made its comeback March 3-6 after a two-year hiatus, inviting all captains and mates to stretch their sea legs and once again partake in the Caribbean’s largest race. Locals are also ecstatic to welcome back Carnival after three years from April 16 May 3. St. Maarten’s Carnival is the longest in the Caribbean – spanning 18 days. Many cruise lines make a stop in St. Maarten, however direct airlift into SXM is currently available via American Airlines (out of Miami, Charlotte, Philadelphia and Dallas), Delta (out of Atlanta and JFK), JetBlue (out of Boston, Fort Lauderdale, JFK, and Newark), Spirit (out of Fort Lauderdale), Frontier (out of Miami and Orlando) and United (from Newark, Washington/Dulles, and Chicago). FIRST QUARTER 2022 | TRAVEL &amp; CRUISE 23