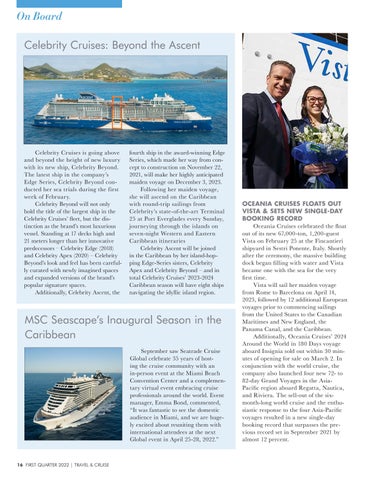 On Board Celebrity Cruises: Beyond the Ascent

fourth ship in the award-winning Edge Series, which made her way from concept to construction on November 22, 2021, will make her highly anticipated maiden voyage on December 3, 2023. Following her maiden voyage, she will ascend on the Caribbean with round-trip sailings from Celebrity’s state-of-the-art Terminal 25 at Port Everglades every Sunday, journeying through the islands on seven-night Western and Eastern Caribbean itineraries Celebrity Ascent will be joined in the Caribbean by her island-hopping Edge-Series sisters, Celebrity Apex and Celebrity Beyond – and in total Celebrity Cruises’ 2023-2024 Caribbean season will have eight ships navigating the idyllic island region.

MSC Seascape’s Inaugural Season in the Caribbean September saw Seatrade Cruise Global celebrate 35 years of hosting the cruise community with an in-person event at the Miami Beach Convention Center and a complementary virtual event embracing cruise professionals around the world. Event manager, Emma Bond, commented, “It was fantastic to see the domestic audience in Miami, and we are hugely excited about reuniting them with international attendees at the next Global event in April 25-28, 2022.”

OCEANIA CRUISES FLOATS OUT VISTA &amp; SETS NEW SINGLE-DAY BOOKING RECORD Oceania Cruises celebrated the float out of its new 67,000-ton, 1,200-guest Vista on February 25 at the Fincantieri shipyard in Sestri Ponente, Italy. Shortly after the ceremony, the massive building dock began filling with water and Vista became one with the sea for the very first time. Vista will sail her maiden voyage from Rome to Barcelona on April 14, 2023, followed by 12 additional European voyages prior to commencing sailings from the United States to the Canadian Maritimes and New England, the Panama Canal, and the Caribbean. Additionally, Oceania Cruises’ 2024 Around the World in 180 Days voyage aboard Insignia sold out within 30 minutes of opening for sale on March 2. In conjunction with the world cruise, the company also launched four new 72- to 82-day Grand Voyages in the AsiaPacific region aboard Regatta, Nautica, and Riviera. The sell-out of the sixmonth-long world cruise and the enthusiastic response to the four Asia-Pacific voyages resulted in a new single-day booking record that surpasses the previous record set in September 2021 by almost 12 percent.